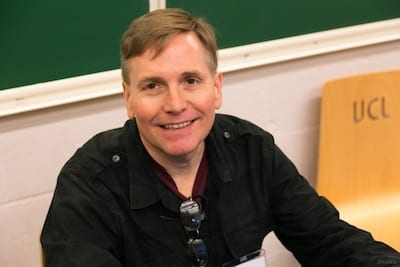 When I first attended a BIEN Congress in 1998, I’d already been a Basic Income supporter for 18 years, but it was exhilarating for me just to find out that there were enough dedicated Basic Income supporters to fill an auditorium. I was a young researcher looking to get noticed. I sent my proposal in months before the deadline. The leaders of BIEN, especially Robert van der Veen, made me feel that my work was notable. I’ve been involved ever since, and I’ve watched the Basic Income movement growth, slowly, barely noticeably until about 2010 or 2011, but very quickly since then. I don’t think BIEN should try to grab credit for the takeoff. We should all just be happy it’s happening and do what we can to build on it.

It’s exciting to see BIEN growing along with the movement. We now have affiliates all around the world, some of which have been instrumental in activism and research about Basic Income. Our news service has grown from a quarterly snail mail newsletter with a few dozen subscribers to a daily updated news website and an email newsletter with over 4,000 subscribers. We have moved from conferences every two-years to conferences every year. Our membership and interest just continues to grow.