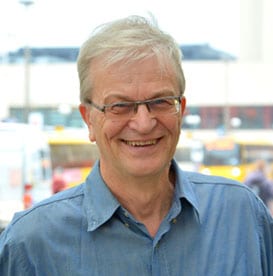 Several texts were momentous at the start of my BI journey, even though they did not always fit a strict definition of an unconditional basic income.

The first text was a pamphlet written by my acquaintance Gunnar Adler-Karlsson. In Danish it was called “No to Full Employment”, but it was not published in Swedish until renamed as “Thoughts on Full Employment”. Adler-Karlsson set out a vision of a three-layered society: the necessity economy, the capitalistic economy and the free economy. The vision included a “life income” or “citizen’s wage”, but everybody was supposed to take part in the necessity economy. The year was 1977.

Another text was a visionary collective work “Norden år 2030” (Nordic 2030). The booklet was illustrated with futuristic graphics and fictional interviews with people who had experienced revolutionary changes and now inhabited a United Nordic region. In one interview, “samlön” and “samtjänst” are introduced. The terms are difficult to translate, but maybe “co-wage” and “co-service” would do. The co-wage is a minimum given to all, but all have to take part in the service production. The booklet was the work of a designer and a photographer.

I already was an admirer of André Gorz, when the book “The Roads to Paradise” appeared in 1983. Gorz discussed heteronomous and autonomous work, and how society should be transformed from being dominated by capitalist wage-labour towards more real freedom. One important means was to introduce a BI called “social wage”, “social dividend” or “social income”.

In 1986 I took part in the international congress on Basic Income in Louvain-la-Neuve. My contribution was called “Basic Income in Three Social Visions”: a Red-Blue mixed society, a Blue-Green dual society and a Red-Green combined society. I concluded that a BI could hardly be included in a Red-Blue fordist version; that it could be part of a blue-green anarcho-capitalist, rather dystopian project; but would be a central feature of a Red-Green vision.

At the conference I got acquainted with a piece by Philippe Van Parijs and Robert van der Veen that enthralled me: “A Capitalist Road to Communism”. Back in Finland I told a “night tale” at one of the last party assemblies of the Finnish Communist Party. In the story, two wise men visited Finland. They pondered our problems and persuaded us to introduce a basic income. The eventual consequences were astounding. People gradually found that they were living in a new society. To find a fitting term for it they consulted old books, and the best they could find was “communism”.

In a book “Vänsterframtid. Nationalekonomiska studier av fordismnes kris och morgondagens alternative” (“Left Future: Economic studies of the fordist crisis and alternatives for tomorrow”), I deepened my thoughts on how a Citizen’s Income could be a crucial step towards a red-green society in the Nordic context.

The Left Alliance, a new party encompassing the old radical left fractions, was founded in 1990. The programme of the party included a “Citizen’s Income”. The CI was seen as a central feature of the “Third Left”. The Third Left would combine the best elements from the First republican/liberal Left and the Second social democratic/communist Left.

The Green Party had been established in 1987 in Finland and from the start it supported a basic income. Interest for the idea was also expressed by people in other parties, and a dozen activists from several parties joined to discuss how to advance Basic Income in Finland. The result was a booklet “Perustulo, kansalaisen palkka” (“Basic Income, the citizen’s wage”). It appeared in 1992, but so did the great “lama”, the worst economic crisis in an OECD-country since the war. There was little room for bold new ideas in a country beset with acute financial and social problems.

I attended the BIEN congresses in Antwerp 1988 and Florence 1990. During my stay in London as guest professor in 1989-1990, I became involved with the Citizen’s Income group. I received the TaxMod micro-simulation model developed by Hermione Parker, visited Anne Miller in Edinburgh, and befriended Tony Walter, whom I later invited to my university (Åbo Akademi) to give a course on basic income.

At BIEN’s 1998 congress in Amsterdam, I presented a paper called “The History of an Idea: Why did Basic Income Thrill the Finns, but not the Swedes?” It was published in the book Basic Income on the Agenda.

Olli Kangas and I made an opinion poll of whether and why people in Sweden and Finland supported a BI or not. We found astonishingly more support in Finland. Even the Finnish conservatives were more in favour of the different BI ideas we asked about than the Swedish greens! In the Geneva congress in 2002, I presented our article “Popular support for basic income in Sweden and Finland”.

Since I had become active as an ecological economist, and developed what I have called my “Global ethical trilemma” between affluence, global justice and ecological sustainability, I became absorbed with the relation between ecological limits and BI. In BIEN’s 2012 congress in Munich, I presented the paper “Degrowth with basic income – the radical combination”. A related article “Basic Income from an ecological perspective” was published in Basic Income Studies. 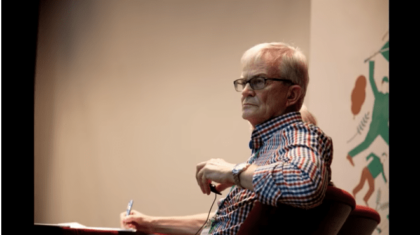 Gradually the interest for basic income has been revived in Finland. A Finnish branch of BIEN has been formed. Olli Kangas has been assigned the delicate task to conduct the pilot study ordered by the government. The task has been made almost impossible for different reasons, but at least basic income is now on the political agenda. Even the Social Democrats are forced to reconsider it seriously.

I was invited as a key speaker to the 2016 BIEN congress in Seoul on the theme “Does Basic Income fit the Nordic Welfare State?” I also acted as a commentator on the planned Youth Dividend experiment in the city of Seongnam. 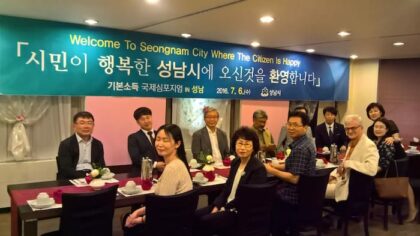 Andersson (in white) in Seongnam

In Seoul it was decided that the BIEN 2018 congress will be held in Tampere, Finland. I wish you all welcome!