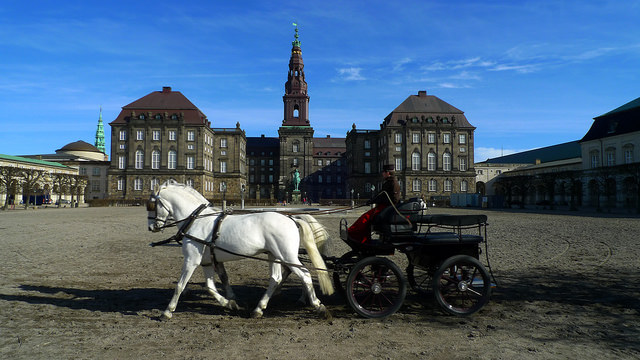 The Nordic Conference on Basic Income Pilots was held in Christiansborg Palace, the seat of the Danish Parliament (Folketinget), in Copenhagen from September 22 to 23.

The Alternative — a green political party that currently holds nine seats in the Danish Parliament — was the official host of the conference. BIEN’s Danish affiliate, BIEN Danmark, organized the event.

All 148 seats in the conference hall were filled for the two-day series of lectures on basic income pilots, which sold out in the preceding week.

BIEN co-chairs Karl Widerquist and Louise Haagh were among the presenters. Louise, who wrote a Basic Income News feature on the conference, opines that, overall, “the Nordic conference went some way to create a new platform for a more positive debate about BI in the wider society.”

Karl describes the conference as “exhilarating”: “People were there from all the Nordic countries, each of which has a very active movement for basic income. The idea is getting very close to the centers of power in several Nordic countries.”

A professional film crew recorded videos of all presentations, panel debates, and Q&A sessions, which are compiled in the YouTube playlist Nordic Conference on Basic Income Pilots 2016:

In addition to the series of lectures and debates, a special dinner was held at the end of the first day–featuring entertainment by the 14-member swing orchestra Zirkus. Zirkus was also responsible to creating a special trailer that was publicized in the week before the conference:

Commenting on Zirkus’s live performance, conference organizer Karsten Lieberkind (BIEN-Danmark) says, “This band is something special, both in terms of visual performance and music. I think everyone was in a state of amazement.”

The Swedish online magazine Syre, which publishes content on social issues from a green-oriented viewpoint, printed a review of the Nordic Conference on Basic Income Pilots (in Swedish). Indeed, the conference was the magazine’s cover story for the month. 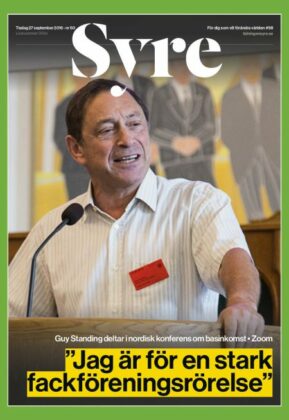 In addition to presenting a general summary of conference, the Syre review focused on participants’ views about the relationship between basic income and organized labor, soliciting opinions from Guy Standing and Malmö basic income activist Göran Hansson. The author also speaks to Thomas Boje about basic income and democracy, and Karl Widerquist about the rise of the recent basic income movement in the US.

Torsten Gejl, MP for the Alternative and an enthusiastic supporter of the conference, has shared these words from Karsten (read Torsten’s full post here):

“To me, this conference is the culmination of not only the preparations for the conference itself but of a process, a gradual but inevitable change in the mindset of many people. maybe in society as a whole, a change in our conceptions of work and labour, that work is not synonymous with labour and that people contribute to society in all sorts of ways. It is about time that we recognize this as a fact.

“Also, it is the realization that people have a right to life, as stated in the the Universal Declaration of Human Rights. In a civilized society, this must, at all times, be an unconditional, non-negotiable fact. And nobody, no individual, no group, no organisation, no society or state should ever be allowed to come between a person and his or her basic needs for survival. Thanks, Karl, for those words.

“And a final word about the Alternative. We may have slightly different views on how to approach the idea and implementation of an Unconditional Basic Income (Ubetinget Basisindkomst), but we most certainly agree on one point: that by trusting people you get so much more in return than you could ever get by exercising power and control.” 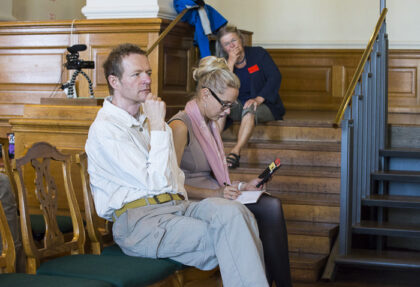 As Karsten relates in communication with Basic Income News, the conference has resulted in new connections and correspondence between BIEN-Danmark and the Alternative.

“We have long enough been in the defensive about our cause when it comes to labour unions, so now is the time to be in the offensive as we have a program that will actually prepare labour unions for the future.”

Dansk Magisterforening (DM), the Danish Association of Masters and PhDs, is one national labor union that is open to the idea of basic income. As Bjarke Friborg, the co-chair of DM, explained in his talk at the conference, the union does not endorse basic income; however, DM has a positive attitude toward pilot projects and perceives a “shared agenda” between DM and the basic income movement.

Summarizing the upshot of the Nordic Conference on Basic Income Pilots, Karsten says, “I think the most important thing that came out of this conference is that we have established very good and friendly connections with both DM and the Alternative, based on mutual respect and recognition. Also, it has strengthened the ties between the Nordic basic income movements to the benefit of future cooperation.”

Thanks to Karsten Lieberkind for information and input for this article.