Cooperative Society and Basic Income: A Case from China

In the process of Chinese industrialization and urbanization, more and more rural villagers have been transformed into urban citizens. Decades of industrialization have left China with a typical dual economic structure: people who make wages live in the cities, and peasants make a living on the land in villages around them. With the rapid expansion of city suburbs, there are always some villagers in the transition zones. As they change from crop growers to wage earners, villagers will lose their land and be accustomed to a totally new way of life. An important question is how to make these large-scale unnatural transitions as smooth and successful as possible.

China provides many examples. One of the most common and successful strategies has been the establishment of cooperatives. Huaidi, one of the many successful cooperatives in China, demonstrates the effectiveness of this approach to the challenges of urbanization.

Huaidi [1] is one of the urban villages in Shijiazhuang, the capital of Hebei province in China. It has a population of around 6000. Unlike most villages around the city, Huaidi villagers initiated a deep “one-villager-one-share” cooperative from the beginning of the urbanization process. In China’s countryside, land is collective owned and privately used by villagers, in an equal fashion, as long as their households are registered in that village. In the process of urbanization, local government compensates villagers for the land which has been taken from them, paying them a single value and a specific transition fee for several years. The value partly depends on the market, and partly on the bargaining power of villagers. Under the leadership of Chen Yuxin [2], Huaidi villagers received very good compensations for their lost land in 1996, 1998 and 1999.

The success of the cooperative has come from these big compensations. In a weak organization, as is common in surrounding villages, villagers will get their money individually and make their living in the city on their own, abandoning the collective at that point. But Chen Yuxin persuaded the villagers to give up the first cash compensation, and bought back the land development rights in the future. In 1996, the Huaidi villagers collected a total of 10 million yuan [US $1,475,797] [3] compensation to build a new shopping mall. In 1998 and 1999, according to the urban plan, Huaidi land was taken by the government to build a road and a big park, respectively. In 1998, they got future development rights on both sides of the road. In 1999, they gave up a land compensation of 200,000 yuan [US $29,516] per mu (equivalent to US $44.3/m2, which is much lower than current land price) and bargained for a 33,350 m2 land patch, for their own future development. Most local governments are happy to accept this kind of exchange because of fiscal implications.

In this way, Huaidi villagers pursue their own urbanization pattern: self-demolition, self-transformation, and self-development. Under this process, villagers get more autonomy and create their own future city life, not becoming the sorrowful victims of social policy. Their core ideal is serving the city, influencing its development, and assuring a smooth transition between city and countryside. With these development rights, Huaidi villagers have amassed billions in assets, including famous and prosperous shopping centers, a decorative empire, food street, private schools, a cultural center, and other attractions. The current annual profit is about 100 million yuan [US $14.76 million]. As shareholders, Huaidi citizens now benefit from a very good welfare system.

First, every family gets identical, well decorated houses. In rural China, besides the arable land each person tends, every family has a house on a separate patch of land. In remote areas, there is also forest land per person. After the land is taken away, families get the transition fee [4] for several years, which is mainly used to rent the house they just lost, before moving into the new one. But many people have no ability to buy their own houses in the city in their lifetime. So after the transition period, every Huaidi family is placed into three or four houses, with a total area of 330 m2. They are given two choices. Under the first choice, they have three houses of 140 m2, 110 m2, and 80 m2 respectively. Under the second, they have four houses of 82.5 m2 each. All the 6000 citizens are very happy to own new houses in the city. These houses are more than enough for the whole family to live, and most can rent one apartment for several thousand yuan [more than US $400] per month. [5]

Second, every child is free to enjoy education. Huaidi villagers have built a famous private school [6], which has facilities from kindergarten to high school. The high quality of this school attracts students from outside of Huaidi, who are accepted in exchange for high fees. Every year, the school organizes various kinds of activities and interaction with other famous schools throughout the world. Teachers are proud of working there. Across the country, China has nine years of compulsory education, from primary to middle school, but Huaidi offers 15 years of free, high-quality education. This private school is one part of the villagers’ collective assets, and all their own children are exempt from tuition fees.

Third, every person benefits from healthcare. Huaidi has had a universal healthcare system since 1996. China, on the other hand, has employee healthcare only since 1998, and universal healthcare just since 2008. Nowadays, Huaidi citizens have double protection. All people are expected to participate in the national healthcare system, and the community pays the medical insurance premium for all collectively. Additionally, everybody can benefit from community healthcare if they choose. It only costs 10 yuan [US $1.48] per year, and supports the beneficiary with another 60% compensation for the money paid by oneself above 1000 yuan [US $148], up to 60,000 yuan [US $8,855], after national medical insurance reimbursement. 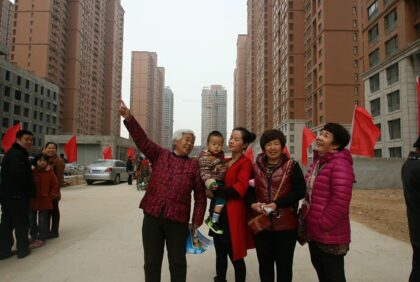 Fourth, every person of age has a pension. Since 1996, every woman in Huaidi older than 50, and every man older than 60 years, have benefitted from pensions of at least 2000 yuan [US $296] per month—with larger pensions for older people. Currently, the Chinese pension system requires a minimum 15 years of contribution, whether a person is employed or not. Huaidi integrated its own pension system with the national one in 2010. People who are employed participate in the pension system via their employers. For those who are not employed, the community pays three quarters of the total annual contribution, and citizens only pay one quarter. The minimum contribution is 20% of the local per capita income in the previous year.

One might wonder why the people of Huaidi get some cash regularly, and unconditionally, after receiving so many benefits in kind. The answer is that the basic income gives people more freedom, especially for those who are unemployed, even though they get enough distributed food and very good social security system. Additionally, this basic income acts as prevention of social ills, reducing crimes, fights and other hurtful behaviors.

Huaidi’s welfare system is much higher than Chinese average social security level, so nobody in the community applies for social assistance. Moreover, there are a lot of other benefits, such as free newspaper, free cable, public utility subsidy, university subsidy, and so on. These welfare benefits come from their original rural collective assets, especially land. Land reform is the biggest achievement from the Mao era. This kind of basic income–often called a social dividend–comes from assets, not tax. It is more likely to be universal for a highly populous country like China.

Notes:
[1] Baidu map, “Location of Huaidi“, 2016
[2] Chen Yuxin, “Leader of Hebei Huaite Group“, 2016
[3] At October 2016 exchange rates.
[4] The transition fee and the compensation for the land, are both paid by the government to the villagers, but the real land taker (future developer) should pay to the government first. Huaidi only keeps one part of this land development rights, and the other part is sold to the developer, who is the real payer of the compensation and transition fee. It is very difficult for single individuals to make good bargains during the land taking process.
[5] It is not very common for urban families to own multiple houses. So Huaidi citizens are richer than most of their neighbours.
[6] The Private School, “Shijiazhuang Foreign Language Education Group“, 2016

Furui Cheng is an associate professor in the Business School of China University of Political Science and Law.