Interview: The feasibility of citizen’s income 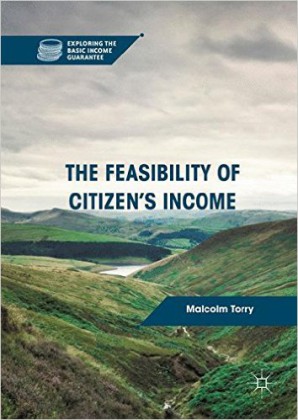 After many years writing scholarship on the citizen’s income (or basic income), Malcolm Torry was constantly asked about the feasibility of the policy. A new book by Torry, The Feasibility of Citizen’s Income, seeks to answer this question.

Below is an interview with Torry on he came to write the new book and some of the conclusions he made in his research.

What prompted you to write this book?

It was about two years ago that the Citizen’s Income debate started to become seriously mainstream. I had already published Money for Everyone: Why we need a Citizen’s Income (Policy Press, 2013), a general introduction to the subject. Although the book was designed to be accessible to the general reader, a number of people had said to me that something shorter and cheaper would be useful so I wrote 101 Reasons for a Citizen’s Income (Policy Press, 2015). Both of these books were designed to show that Citizen’s Income is a good idea. They might or might not have contributed to the increase in interest in Citizen’s Income among think tanks, political parties, and the press. (Both international developments and increasing concern about the future of the employment market were probably more significant causes.) I had frequently been asked questions about the feasibility of Citizen’s Income. At both BIEN and Social Policy Association conferences I had presented papers about feasibility that built on articles about political feasibility by Jurgen De Wispelaere and his colleagues; and then, following a presentation for Cambridge economists on different kinds of feasibility, Karl Widerquist, who was the other presenter at the seminar, asked me if I would turn my presentation into a book for the Palgrave Macmillan series that he edits. Some of us had already noticed that the Citizen’s Income debate was becoming at least as much about feasibility as it was about desirability, so I agreed to Karl’s proposal.

What was the most surprising and/or interesting element you discovered while researching for this book?

Which aspect will be most challenging to overcome in achieving a citizen’s income: political or psychological barriers? Why?

Is a citizen’s income feasible just using current revenue? If so, would this be the most desirable way to implement basic income?

A Citizen’s Income certainly is feasible just using current revenue if income tax allowances (‘standard deduction’ in the USA; ‘Personal Allowance’ in the UK) are adjusted appropriately, and Income Tax rates and other aspects of a tax and benefits system are adjusted appropriately. We have shown that in the UK a Citizen’s Income of £60 per week for working age adults (less for children and young adults; more for elderly people) would require no additional public expenditure if Income Tax Personal Allowances were reduced to zero, Income Tax rates were raised by just 3%, and National Insurance Contributions (social insurance contributions) and means-tested benefits were adjusted appropriately.

Whether this would be the most desirable way to implement a Citizen’s Income scheme is of course debatable: but it would probably be the most feasible way to begin implementation.

What would the most significant effect of the citizen’s income be on households?

What would be the most significant effect must be a matter of personal opinion, because different households have different priorities: but among significant effects would be greater freedom to choose an employment pattern that worked for all of the members of the household; lower marginal deduction rates for all or many households, meaning that an increase in earned income would translate into a higher additional net income than under current means-tested benefits systems; and freedom from bureaucratic intrusion into the household’s relationships and circumstances.

What is the empirical evidence that universal programs are superior to means tested ones?

To decide whether one system is superior to another requires a list of criteria for a good benefits system, and then different systems need to be evaluated against those criteria. The book Money for Everyone contains a full discussion of the criteria for a good benefits system, discusses the ways in which the criteria are met or not met by different systems, and concludes that a universalist system meets the criteria more thoroughly than a means-tested one. The Feasibility of Citizen’s Income does not ask directly about the desirability of Citizen’s Income, but rather seeks evidence for Citizen’s Income’s ability to pass a variety of feasibility tests (although of course feasibility is required for desirability, and desirability for feasibility). Evidence is drawn from natural and constructed experiments, microsimulation results, and other empirical research.

What is the most desirable aspect of a citizen’s income? What is the main reason you support basic income?

Again, what is the most desirable aspect of Citizen’s Income will be a matter of opinion. Since we all have different preferences, the question then comes down to the second question asked: What is the main reason that I support Citizen’s Income? There is no main reason; there are lots of reasons: unconditionality; universality; lower marginal deduction rates; greater individual freedom; greater equality; decreased poverty; enhanced social cohesion; administrative simplicity; the absence of stigma, error, fraud, and bureaucratic interference in the lives of individuals and households.

What brought you to the citizen’s income movement?

From 1976 to 1978 I worked in the Department of Health and Social Security’s Supplementary Benefit office in Brixton in South London, administering means-tested benefits. We all knew how bad the system was, both for claimants and for the staff. The benefit that we and the claimants loved was universal Child Benefit, for its simplicity, its reliability, and the way that it reduced poverty, increased equality, and created social cohesion. Why shouldn’t the same principles and the same results be transferred to benefits for working age adults?

I was ordained, and served my first post in the Church of England’s ministry at the Elephant and Castle: the parish in South London in which the headquarters of the DHSS was located. I got to know people in the offices, and was invited to the department’s summer school. There I found the idea of a Basic or Citizen’s Income being seriously discussed. I was invited to join a group of individuals from a variety of backgrounds interested in the idea – the Basic Income Research Group, now the Citizen’s Income Trust – and have participated in its work ever since.

The motive has always been the same: to research the desirability and feasibility of an unconditional income for every individual as a right of citizenship. My new book concludes that Citizen’s Income’s implementation is feasible.