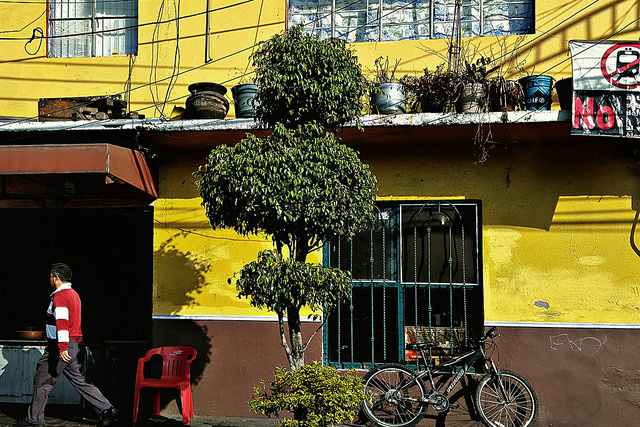 A Constituent Assembly of Mexico City is currently developing the city’s first constitution. A proposal for the constitution, currently under deliberation, includes an article specifying a right to a basic income to secure a dignified life.

On September 15, Mexico City Chief of Government Miguel Angel Mancera delivered a proposal for the city’s constitution, and a constituent assembly was formed to analyze, debate, modify, and ultimately vote on and approve a constitution.

Mancera’s proposal draws much inspiration from the Mexico City Charter for the Right to the City, developed in 2007 by a coalition of organizations associated with Mexico City’s urban popular movement. The “Right to the City” charter includes a demand for the “right to sufficient income to guarantee a dignified life” (3.4.1). Additionally, another article in the charter’s section on ensuring a “productive city” states, “To democratize productive employment opportunities in the city, it is necessary to … promote the establishment of a universal citizen income” (3.4.3).

A more recent precedent was a seminar on basic income and wealth redistribution organized in April 2016 by the Senate of the Republic of Mexico and the Economic Commission for Latin America and the Caribbean (ECLAC) of the United Nations. In its position document released in the following month, ECLAC further encouraged its member states to investigate a basic income guarantee.

Meanwhile, there has been growing political interest in basic income in Mexico. For one example (amongst others), the young left-wing political party Movimiento de Regeneración Nacional (Morena) has expressed interest in advancing the policy.

These precedents lay in the background of the September 15 meeting to move forward the development of Mexico City’s constitution.

A major purpose of the constitution is to formally specify rights of all residents of the city. The stated objectives of the document include the following (emphasis added):

To include new rights such as those of families, non-salaried workers, the right to the city, to public space, to democracy, to proper administration, to a progressive basic income, to memory, to care, to the protection of animals and cultural rights, among others …

The specific article where basic income is proposed reads as follows:

Right to a dignified life

Every person is entitled to a standard of living that is adequate for him or herself and their family, as well as to the continuous improvement of their living conditions. The right to a basic income will be guaranteed giving priority to the persons in situations of poverty, and those that can’t fulfill their material needs by their own means, as well as priority assistance groups. The rules for accessing basic income will be established in this article’s common dispositions.

Note that, despite the potentially confusing wording of second sentence, the proposal here is not for a targeted or mean-tested benefit; instead, the constitution is recognizing a need to establish some priorities for accessing the basic income grants.

One model of the basic income under consideration is Mexico City’s pension program for individuals aged 68 and older. The pension is universal (among seniors), unconditional, distributed to individuals, and mandated by law. Among its proponents, the basic income is seen as an extension of the pension from the elderly to all.

Describing the proposed constitution, Pablo Yanes of BIEN Mexico states, “Without a doubt, we are at the outset of an intense debate around basic income, and unprecedented moment in the history of Mexico City.”

Yanes says that while “the specific wording [in the constitution] can be improved and made more precise”, the recognition of a basic income as a right is “an immense step forward”:

In addition to the federal constitution reform initiatives presented before Congress by Congresswomen Araceli Damián and Xóchitl Hernández and the one introduced before the Senate by the Senator Luis Sánchez, the inclusion to the right to basic income in the Mexico City Constitution project constitutes, without a doubt, a turning point for basic income’s recognition in Mexico.

A new starting point has been set. This is Mexico City’s contribution to the growing international movement for basic income.

The Mexico City Constitution ultimately approved by the constituent assembly will go into force in February 2017.

Debates will take place ensuing months, including on the topic of basic income.

Special thanks to Kate’s supporters on Patreon.