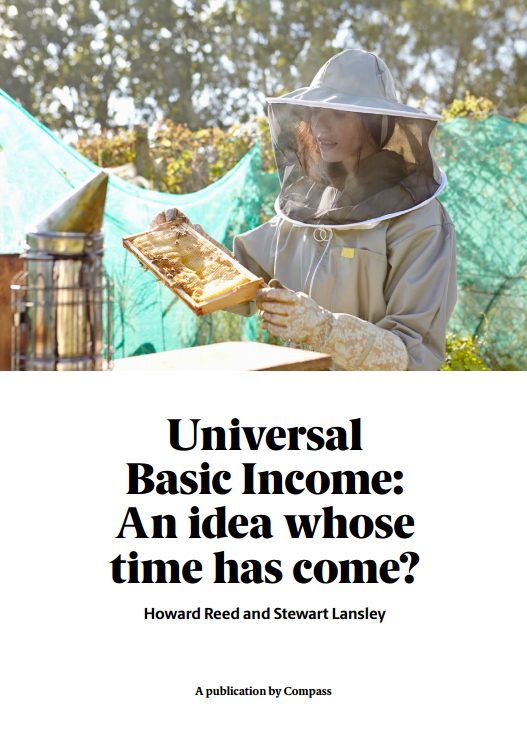 This past month, United Kingdom’s Compass advocacy and publication website published an analysis of the basic income. The report discussed how the basic income could be introduced in the UK, and how it would interact with other social service programs.

One of the authors, Stewart Lansley, a Compass associate and visiting fellow in the School of Policy Studies at the University of Bristol, discussed how “income support is being weakened while secure work is becoming less available,” and how the basic income would address the impending “robotic revolution.”

The Compass report mentions the sanctions that have been introduced in UK’s entitlement system and how that was leading some to fall through the cracks. What do you think the biggest challenge of the UK’s current entitlement system is and how does the UBI address it?

Britain’s system of social security – complex and unpopular – needs a fundamental rethink.  With much greater reliance on means-testing, and the erosion of the role of universal benefits, it has moved sharply away from the original Beveridge blueprint. Further, the level of conditionality has been raised, with governments exercising greater and greater control over the lives of claimants, making the system much more punitive and intrusive.  Since 2013, more than one million claimants have been sanctioned, leading to a loss of benefits for between one month and three years for some of the most vulnerable of claimants.

Mass sanctioning has led to an increase in destitution and has been one of the principal drivers of the great surge in dependency on food banks. By guaranteeing a weekly income, even at a modest rate, a universal basic income (UBI) would boost the universal element of income support, reduce dependency on means-testing and bring an end to sanctioning.

What are the economic and societal risks that the UBI schemes outlined in the Compass report address?

A UBI would help tackle two key economic and social risks. First, the widespread insecurity and growing risk of poverty associated with work. Today, more than 60 percent of those in relative poverty in the UK are in work, a significant rise compared with the immediate post-war decades. By providing a guaranteed, if modest income, a UBI offers a more robust safety net in a much more insecure, low paid and fragile working environment and will help reduce the risk of poverty amongst those in work.

Secondly, whatever its ultimate impact, the impending technological and robotic revolution is set to bring further disruption and upheaval to jobs and pay. Crucially, a UBI offers an effective way of providing income protection from the wider repercussions of accelerated automation.  Further, the robotic revolution may eventually bring significant productivity gains, though to what extent and when remains uncertain. Although these are yet to be realized, these could offer potentially new and significant social and economic opportunities. There is a very real risk, however, that the gains – if they are realized – will be colonized by a small powerful elite, leading to a further jump in inequality and a surge in joblessness. A UBI would play a key role in ensuring that such gains are more evenly shared.

Do you think the alignment between the left and the right over the UBI is sustainable once the specific policy details for implementation are worked out? For example, the report makes clear the UBI would not be revenue neutral nor would it eliminate all means-tested benefits, which might alienate some supporters on the right.

The right and left see a UBI from very different standpoints. The right favours a basic income as a way of achieving a smaller state, and would see its introduction as an opportunity to sweep away a range of other forms of social protection. This is undoubtedly the motive behind the support coming from some Silicon Valley enthusiasts.

The left, on the other hand, views such a scheme as part of a strong state, as a way of securing a robust income floor, of tackling poverty and as a means of promoting equal citizenship. For the left, it is a profoundly democratic and egalitarian concept that promotes both security and greater personal freedom, and a recognition that all citizens have the right to some minimal claim on national income.

These views are clearly incompatible and it is inconceivable that a scheme could be devised that satisfied both sides. Left supporters are clear that a UBI scheme must be seen as a supplement to the wider public provision of services and not as a substitute. A continuing and strengthened role for the public provision of key public services and other forms of state intervention including a generous living wage remain essential as a way of creating further platforms for a more equal and just society.

Integral to the concept of a UBI is the promotion of greater freedom and choice, progressive changes with transformative potential. By providing basic security, it would give people more time and more bargaining power in the labour market. With a growing debate about how to balance work-life commitments in an era of much more insecure work, a UBI would offer people greater flexibility between work, leisure and education, and over the type and length of employment while providing greater opportunity for caring and wider community responsibilities. Some might choose to work less or take longer breaks between jobs. Others would be incentivized to start businesses. Some might drop out of work entirely to care or retrain while others might devote more time to leisure, personal care or community support and less to paid work. But implicit to a UBI is that all lifestyle choices would be equally valued.

Importantly, a UBI would both acknowledge and provide financial support for the mass of unpaid work, disproportionately undertaken by women, in childcare, care for the elderly and voluntary help in the wider community.

It would value but not over-value work. The solution to working age poverty has traditionally been through a mix of decently paid employment and state income support. But income support is being weakened while secure work is becoming less available. One of the great strengths of a basic income is that it separates survival from employment and production. Tackling poverty would become less dependent on the ‘work guarantee`.

In the various schemes outlined in the report, it is noted that some form of disability benefits and others would be preserved with the UBI. How would these benefits likely operate with a UBI and how would they change?

Because a flat rate payment makes no allowance for those with additional needs, some types of means-testing would need to stay, even as we moved over time to a fuller and more generous scheme. A feasible UBI system would, for example, need to be supplemented with, at least, the continuation of disability benefits and additional help to cope with high and variable essential living costs, especially housing and childcare.

To deal with the additional costs of disability, existing benefits for disabled people would remain and run alongside the UBI. In the simulations of different UBI schemes in the report, we have retained the Personal Independence Payment and Employment and Support Allowance.

What would be the benefits of creating a Social Wealth Fund to finance the UBI?

Creating a UBI-linked social wealth fund would be one way of securing an independent source of funding outside of the general tax pool. Social wealth funds are a potentially powerful tool in the progressive policy armoury. They are collectively held financial funds, publicly owned, and used for the wider social benefit of society.  Such funds have been widely used across a range of countries and would ensure that a higher proportion of the national wealth is held in common and used for public benefit and not for the interests of the few. They are a way of ensuring that at least part of the benefits of some economic activity are pooled and shared amongst all citizens and across generations.

There is already one example of a fund dedicated to a citizen’s payment, one operating in Alaska since 1982. Here, the returns from a sovereign wealth fund, funded by oil revenue, are used to pay an annual citizen’s dividend. There is an important principle involved in such an arrangement: that citizens are the proper owners of the environment and have the right to share equally in its benefits. The benefits from a common asset should not be hived off to a small number of private owners.

Although the UK has already spent most of its oil revenue, there is no reason why such a social wealth fund could not be established using other sources of income. These could include the dividends from a range of other assets – including other natural resources – and the occasional one-off taxes on windfall profits. As in Alaska, such a fund could be allowed to grow over time, with part of the proceeds from its management paid back into the fund, and part used each year to partially fund a UBI scheme. Over time, such a fund could grow significantly, sufficient to help top up any shortfall necessary to pay for a workable UBI scheme.

An alternative, and more radical way of paying for a dedicated UBI fund would be by the dilution of the heavy concentration of capital ownership, achieved through a small annual charge on the owners of shares. Such a proposal was originally made by the distinguished economist and Nobel Laureate James Meade in the 1960s, as a direct way of tackling the risk of ever-growing inequality. Such an idea was widely debated and discussed in the UK, and in some European nations, in the 1970s and 1980s, while one version of such a scheme – the wage-earner fund – was introduced in Sweden in 1981 and lasted for 10 years, though it was not used to fund a UBI or citizen’s payment.

The report notes the growing support across Europe and the UK for the UBI. What are some steps UBI advocates can take to make it a reality?

The pilot schemes being planned for Canada, Finland, the Netherlands and France are having a profound effect on the wider debate about UBI. These forthcoming experiments are helping to build momentum in support of an idea that, until recently was confined mostly to a few think tanks, commentators and academics. Crucially, they will help provide some evidence of the dynamic effects – including on the incentive to work, employment patterns, changes in participants’ well-being and the reaction of employers.

The pilots have helped build interest in the UK, and it is now time to start building on that to promote a much wider national debate on the issue.

Ultimately, a real test of how such a scheme would work depends on the application of a proper, lengthy and adequately sized pilot with a control group. To take advantage of these developments, the UK campaign should follow the lead taken by others and work to build to case for its own pilot scheme.