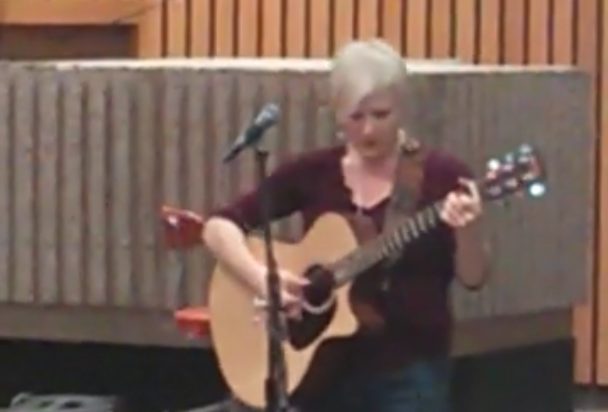 “Shouldn’t I have enough to eat? And don’t I deserve a safe place to sleep?”

These are the first lines from the song that shook up this year’s North American Basic Income Guarantee Congress. The song, “Just Because I’m Alive,” was performed live at the congress by musician Brandy Moore, an advocate for the basic income.

Moore is starting a GoFundMe campaign to help fund a studio version of the song that she hopes to release in August. Moore said she has already raised over 10 percent of the goal, and hopes “the momentum keeps going.”

One of the primary reasons that Moore supports the basic income is that it would let all of us be “free to do what we want with our lives.”

“I believe that art is a priceless contribution to society and that artists should be valued.  I believe that all the unpaid work that people carry out in our society should be recognized as priceless as well.  Anytime anyone is caring for another who cannot care for themselves in some way,” Moore said.

About two years ago, Moore came across the idea of basic income on Facebook and, as she puts it, became “intrigued.”

Her curiosity did not stop there . Moore was inspired to write a song about basic income and wrote it in “one sitting.” She said she started with the first two lines of the song “and everything else flowed out of that.”

Moore said that it is important to create art related to the basic income, because art “has the ability to touch hearts and inspire minds in a very immediate way.”

“It gives a voice to feelings and subjects that people often find hard to talk about in words to each other about, but still need to be expressed.  It helps people feel less alone and more connected with the rest of humanity,” Moore said.

“It beautifies our lives.  It captures people’s attentions and gets conversations going.  It can make an unfamiliar idea feel more acceptable because it has touched people in a deeper way than it would have by just talking about it.”

Ursule Critoph, an attendee at NABIG, said Moore’s performance “struck a chord” with the audience. Critoph said using art to promote the basic income will help “appeal to the human heart and spirit.”

“While Brandy never mentioned the words basic income, her lyrics express the essential foundations that underlie the importance of a guaranteed basic income.  Appealing to the universal human need for affirmation, food, shelter and other aspects of a full life is critical to convincing persons that access to a basic income must be a universal right,” Critoph said.

Maria Wong, a worker at the Vancouver Rape Relief and Women’s Shelter, also listened to Moore’s live performance. She said loved the lyrics because it illustrated the reason she is “fighting” for the basic income: “it’s a human right.”

Wong said the basic income would help women, such as those at the shelter.

“Women experience poverty at higher levels because of their responsibilities to care for family and lack of options or value in the workforce. We think a Guaranteed Livable Income will give women more autonomy and be less invisible in society,” Wong said.

Prior to becoming a full-time artist, Moore worked as an office temp, but she said she “hated the way it would suck all my energy away,” so she started focusing wholly on her music.

She said she thinks that others should also have the choice to do what they love.

“We were meant to be free,” Moore said. “And when enough of us believe that we deserve to be free, we will be.”