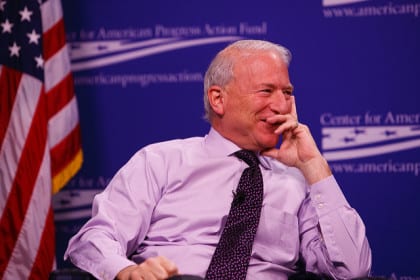 Andy Stern spent fifteen years as the president of the Service Employees International Union (SEIU) — one of the United States’ largest unions, with approximately 1.9 million members from the health care, public services, and property services professions.

As he relates in a recent blog post for the World Bank, Stern resigned as head of the SEIU in 2010 because he had “lost his ability to predict labor’s future” due to rapid changes in the economy. Instead, he says, his focus “turned to larger questions: If there are significantly fewer jobs and less work available in the future, how will people make a living, spend their time, and find purpose in their lives? Also, how can we keep the income gap from growing so wide that it erupts into social discord and upheaval?”

The solution that Stern proposes — in both the blog post and his upcoming book, Raising the Floor, from which it’s drawn — is the universal basic income.

After presenting trials in Manitoba and Namibia as evidence of the UBI’s effectiveness, Stern concludes:

“My support for UBI is born from a belief that we must attack poverty at its core—a lack of income—rather than treating its symptoms. Also, with major technological advances eliminating more middle-class jobs, new systems of universal support are required. Lacking good jobs and satisfying work, the next generation will desire to build a life outside of poverty and low-wage work, and we should endeavor to give them that opportunity.”

A summary of Stern’s soon-to-be-released book, Raising the Floor, is available on the website of the publisher, Public Affairs Books.

A short video interview with Stern about Raising the Floor has recently been published on YouTube.