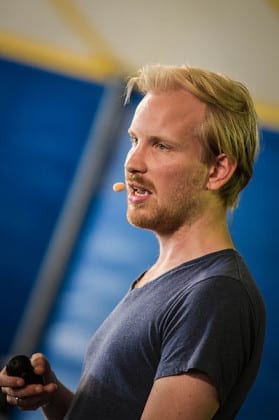 Utopia for Realists: The Case for a Universal Basic Income, Open Borders, and a 15-Hour Workweek, the latest book by the award-winning Dutch journalist Rutger Bregman, will be published in English on Tuesday, April 19. The book was originally published in Dutch, and met immense success in the Netherlands — where it not only became a national bestseller but also helped to spearhead the movement for municipality-level basic income experiments.

Early in the book, Bregman transports the reader back to a long-gone time of utopian fantasy — to visions of “Cockaigne,” a land where “rivers ran with wine, roast geese flew overhead, pancakes grew on trees, and hot pies and pastries rained from the skies,” and all people danced, drank, and lounged together as equals. A new vision of utopia, he argues, is sorely needed in modern societies.

A century ago, influential thinkers like John Maynard Keynes predicted that automation and improved efficiency would render work all but gone in the not-so-distant future. Instead, here in the early decades of the 21st century, we citizens of developed nations find ourselves working longer hours than ever — all too often in jobs that we ourselves find meaningless. (On the last point, see Bregman’s lucid discussion of “bullshit jobs” in hist chapter entitled “Why it Doesn’t Pay to be a Banker.”) Technology has brought great improvements in living conditions — at least for a few — but dreams of a paradise of leisure seem lost to the wind. 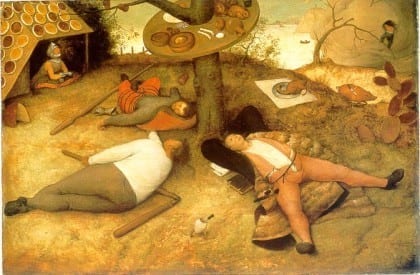 Detail from Pieter Bruegel the Elder’s “Luilekkerland” (“The Land of Cockaigne”), 1567

How, then, can we reclaim our visions of utopia? How can we turn our modern “Land of Plenty,” as Bregman often calls it, into a land of plenty for all — and plentiful leisure and life-fulfillment as well?

No doubt, many skeptics and naysayers will find Bregman’s solutions — his visions of a universal basic income and a 15-hour workweek — to be fanciful as the mythical land of Cockaigne. Bregman himself concedes that, to many, his proposals will sound like “crazy dreams.” But it can’t be over-stressed that this “crazy dream” is, indeed, a “utopia for realists.” Far from being a woolly-headed dreamer, Bregman proposes and describes specific steps en route to utopia — from disincentivizing overtime to taxing banking transactions to developing alternative measure of progress to the GDP — and thoroughly backs his claims with diverse historical and experimental evidence.

For example, in his first chapter on basic income (“Why Everyone Should Get Free Money”), Bregman presents the findings of multiple studies of the effects of “free money.” He discusses the results of “Mincome” experiment in Dauphin, Manitoba, and similar concurrent studies conducted in the United States, in some detail — in addition to summarizing the outcomes observed by charitable organizations like GiveDirectly, which deals in no-strings-attached cash donations, and formal studies of cash transfers to the poor. He effectively combines statistics, anecdotes, and theoretical considerations in making the case that a basic income is the most effective means to combat poverty — a realistic approach to utopia-building if any is.

Of course, as Bregman knows, basic income, on its own, is not sufficient to create a utopian future. I will leave it to the reader to discover the other facets and nuances of his “crazy dream” — but, as an educator, I do want to call special attention to Bregman’s critique of our present discourse about education, which he (accurately) notes “invariably revolved around the question: Which knowledge and skills do today’s students need to get hired in tomorrow’s job market?” According to Bregman, this is “precisely the wrong question.” Instead, educators must ask what knowledge and skills we want students to have — to prepare them “not only for the job market but, more fundamentally, for life.” I couldn’t agree more. (Of course, as a philosophy instructor, I also couldn’t agree more when Bregman specifically recommends training students in “philosophy and morals,” but I digress…) 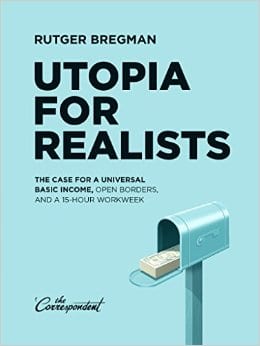 Utopia for Realists is a highly recommended read — but, in the words of Reading Rainbow’s LeVar Burton, you don’t have to take my word for it. Bregman’s book has received widespread praise from noted scholars and thinkers in the basic income movement and beyond.

Nick Srnicek, the co-author of another influential utopian-leaning book (Inventing the Future: Postcapitalism and a World Without Work), calls Utopia for Realists “a bold call for utopian thinking and a world without work – something needed more than ever in an era of defeatism and lack of ambition,” while noted social theorist Zygmunt Bauman describes it as “brilliant, comprehensive, truly enlightening, and eminently readable” and “obligatory reading for everyone worried about the wrongs of present-day society and wishing to contribute to their cure.”

BIEN co-founder Philippe van Parijs also commends the book, saying, “Learning from history and from up-to-date social science can shatter crippling illusions. It can turn allegedly utopian proposals into plain common sense. It can enable us to face the future with unprecedented enthusiasm. To see how, read this superbly written, upbeat, insightful book.”

To learn more about Rutger Bregman and Utopia for Realists, visit the website of its publisher The Correspondent, a crowdfunded online journal for which Bregman has written extensively.

Bregman was recently interviewed by Gawker about basic income, in conjunction with the English version release of his book. The interview covers much ground, including the feasibility of a basic income in the United States (Bregman sees a “natural fit” for a basic income in the US, calling it the “ultimate marriage of conservative and progressive politics”), and responses to a battery of potential objections, such as the free-rider problem, the threat of inflation, and the worry that an economy in which people work fewer hours could not generate sufficient revenue to finance a basic income.

For a short and accessible video introduction to Bregman’s ideas about a basic income, watch his TEDx talk on YouTube.