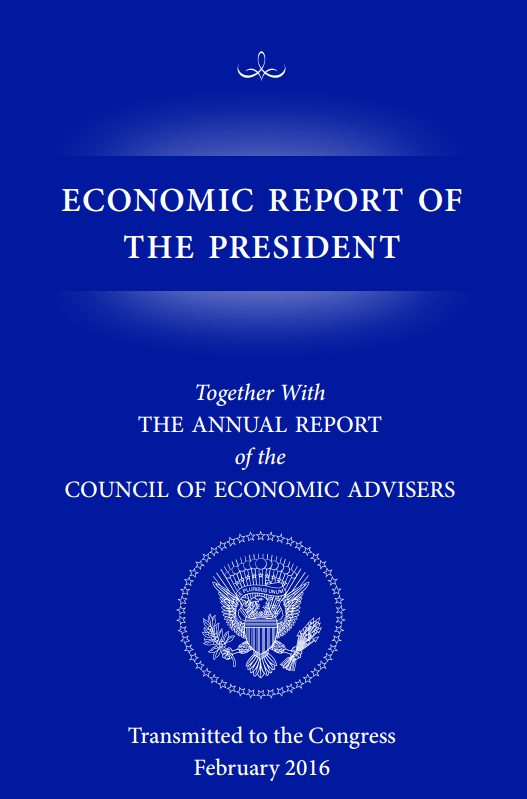 Released in late February, the White House’s Economic Report of the President discusses a number of topics related to the United States economy, including the global macroeconomic situation, the economic benefits of investing in U.S. infrastructure, and technology and innovation.  Within that last category, the report covers declining labor market dynamism and notes, “Both job creation and job destruction as a share of total employment have been in continuous decline since 1980 but that job creation has fallen faster in the last two decades.”  This is shown by Figure 5-4 from the report. 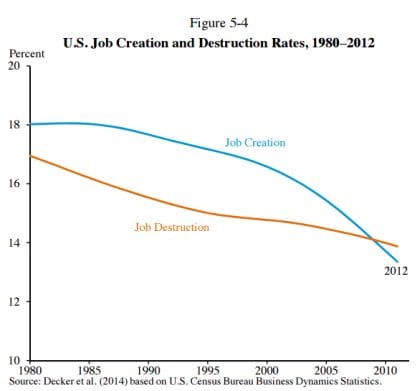 After introducing the fact that jobs are currently being destroyed faster than they are being created, the report continues to discuss robotics and the future of innovation.  According to the report, “Robots, like other types of automation can be either complements to, or substitutes for, conventional labor.”  And while many have argued that mass unemployment due to robotics and automation is decades away since history has shown that new jobs are created as old ones are destroyed, the report cites an Oxford University study by Frey and Osborne (2013) that argued that big data and machine learning will make it possible to automate many tasks that previously seemed impossible to automate.  As seen in Figure 5-15 from the report, a vast majority of jobs that pay less than $20 an hour are in danger of eventual automation, as are a significant number of jobs that pay $20-40 an hour. 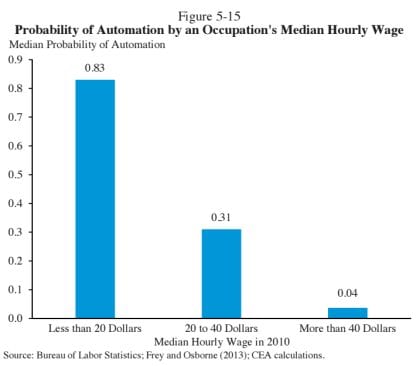 On this topic, Scott Santens has written an article in response to the White House report in which he argues that such mass automation may be nearer than we thought.  Santens references a major development in artificial intelligence recently that many thought was a decade away but that has recently been achieved: A computer was able to defeat one of the world’s best players in a game called Go.  According to Santens, “Go is a board game so complex that it can be likened to playing 10 chess matches simultaneously on the same table.”

Santens believes that a basic income is the best way forward to ensure a minimum standard living for those who will lose their jobs to robots.  As technology continues to improve and the world is introduced to self-driving cars and other robots that will replace large swaths of jobs that are not merely routine and manual but also nonroutine and cognitive, Santens thinks society needs to be proactive in enacting a basic income to help decouple income from labor as labor demands from humans begins to shrink.