Can the ECB create money for a universal basic income? 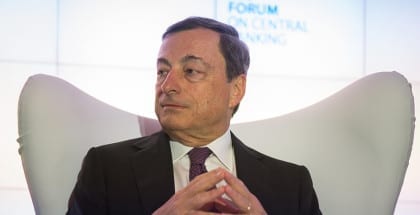 Funding basic income through taxation is costly. At the same time, low consumer demand is a major worry. The European Central Bank could kill two birds with one stone by giving money directly to citizens.

Finnish social welfare agency KELA’s basic income experiment has got plenty of attention in Finland and elsewhere. This is not surprising: in recent years various proposals for a basic income have been submitted by a growing number of scientists, politicians and non-governmental organizations in several countries.

According to a study by the Municipal Development Foundation, 51 percent of the Finnish population supports basic income. Last year, even greater support was found on surveys in France and the Spanish region of Catalonia.

The popularity of unconditional basic income can be explained by the fact that it can be argued from various standpoints: the left is attracted to the idea of eliminating poverty and making citizens freer; the right wants to simply welfare benefits, and encourage people to get out of benefits and take up whatever work is available.

There are problems with basic income models that still need attention. The most common of which was brought up last week In an interview on the Finnish public broadcaster Yle, history professor Juha Siltala brought up one of the most common objections: “We should really consider a basic income that you can really live on. But who pays it then?”

When KELA hinted that they might pay up to 800 euros per month, unconditional and tax-free, to participants in their basic income pilot, Canadian professor James Milligan dismissed the idea as “typical fiscal nonsense.” According to Milligan, if the amount was given to the whole population, it would require doubling the Finnish tax rate.

But what if a universal basic income is funded by other means, in addition to taxation?

The ECB to the rescue

In recent years, the European Central Bank (ECB) has tried to support the eurozone’s lagging inflation through “quantitative easing” (QE), a measure used by other central banks as well. The ECB has been buying securities from institutional investors such as banks, using large amounts of fresh money.

So far, national economies have not responded as hoped: despite the increase in the value of securities, consumer prices have stagnated.

Last year the leader of the British Labour Party Jeremy Corbyn promoted the idea of “People’s QE” in which the Bank of England would channel money directly to citizens, not banks.

The expression that Corbyn used is misleading, however, because in his proposal the money is not channeled directly to the public, but to government, which then uses it to stimulate the economy through infrastructure projects and other measures.

Another model was suggested by a group of 19 economists, who signed a letter published in the Financial Times (FT) in March last year. They proposed that the money should be given directly to citizens of the eurozone countries. The idea was to use ECB money to give 175 euros per month to each citizen for 19 months.

Economist Milton Friedman once called this kind of payments “helicopter money”: it is as if the money is just thrown at people from the sky, with no strings attached. Effectively, what the FT letter proposed was a eurozone-wide unconditional basic income paid by the ECB.

One problem with helicopter money is inflation

If the ECB funds infrastructure investment and fiscal policy, it strengthens the position of states substantially. The impact of a pan-European basic income would be the opposite. It would transfer a substantial part of social security funding from states to the ECB. In addition, allocation of money would be determined by citizens, not governments.

The FT letter did not call for a permanent and comprehensive basic income. After all, 175 euros per month is a significant sum in the poorest countries of Europe, but not much at all in countries like Finland.

There are other problems. If the ECB pays a higher basic income, rising demand could lead to massive inflation, unless production of goods increased at the same pace as demand. ECB’s quantitative easing has inflated equity prices for a long time, but sharp increases in the prices of real goods are generally considered more harmful to the economy.

In addition, direct monetary payments to states and citizens would be incompatible with the EU treaties and further limit ECB’s independence.

Two birds with one stone?

One model discussed by basic income activists would entail that the ECB pays the same amount to all European citizens. The countries with higher living expenses would top up their citizens’ basic income from their national treasury, or from the common EU budget.

Such an arrangement may sound utopian, as it would require a major revision of existing national social security frameworks, and probably a reform of the entire financial system.

But the reality is that the challenges faced by the current welfare arrangements and the economic system are reaching a crisis point. Many jobs have been shredded, and, as technology advances, returns from labor and tax revenues no longer increase as labor productivity rises.

Still, we need money to sustain consumer demand and fund social security. A pan-European basic income financed by the ECB could solve both problems. There is no doubt that we will see more of such discussions in the public sphere in the near future.

Follow
15 comments ECB, Europe, QE for People, Quantitative easing
The views expressed in this Op-Ed piece are solely those of the author and do not necessarily represent the view of Basic Income News or BIEN. BIEN and Basic Income News do not endorse any particular policy, but Basic Income News welcomes discussion from all points of view in its Op-Ed section.