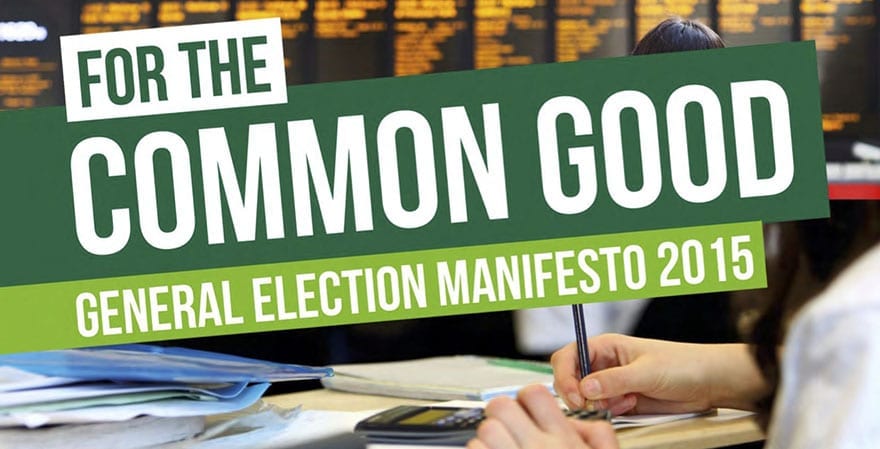 The Green Party of England and Wales received plenty of press over the past few months about their support of a basic income. While questions arose about whether they would keep basic income in their manifesto, they ultimately decided to keep it in their plans. Preparing for the general election on May 7th, the Green Party released their election manifesto and included a commitment to a basic income. Under the social security section of the manifesto, basic income is the first policy mentioned as the long-term plan of the Green Party, and it is included on the one-page executive summary at the front of the manifesto.

However, the Green Party admits that implementing a basic income in five years may be impractical and thus plans to conduct consultations and research on the basic income idea during a first parliament with the aim of implementation in a second parliament.

The Green Party released a basic income costing scheme alongside the manifesto, seeking to answer the major questions about funding a basic income in the UK.

To fund this, the basic income replaces most means-tested benefits, totaling £163.767 billion, but notably keeps Housing Benefit and disability-related benefits. To fund the rest of the cost, the Green Party proposes abolishing personal income tax allowances, removing the primary and secondary thresholds for National Insurance contributions (NICs), eliminating Child and Working Tax Credits, and removing about 44% of the total of tax and National Insurance relief on pension contributions. These measures, partnered with savings on administration costs reach the desired £331 billion.

This basic income system essentially introduces a 32% taper rate (20% from income tax and 12% from NICs) on earned income under £31,785, at which point the income tax level would rise, moving the taper rate up to 52%. Further, a person under this system will need to earn about £13,000 before they pay more in tax and NICs than they receive in basic income. Comparing Universal Credit to this basic income scheme, people earning under £41,000 will gain from the switch to a basic income, equivalent to about four-fifths of taxpayers.

To learn more, check out the following links: