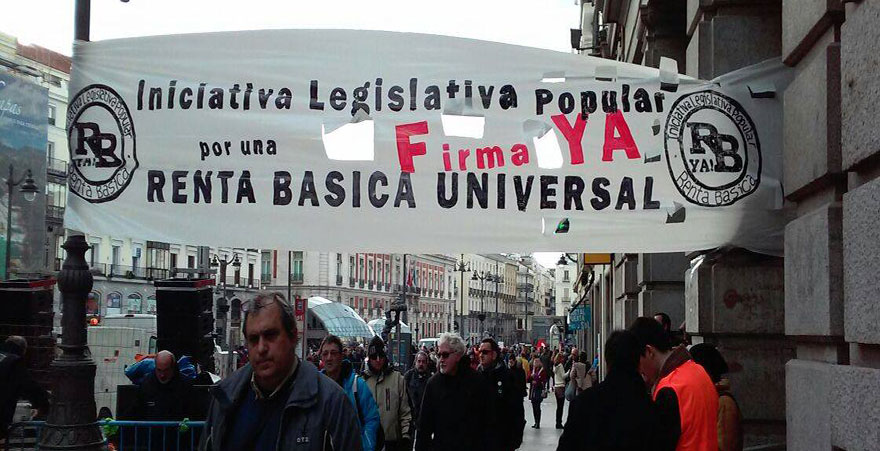 After one year of efforts, the spanish popular legislative initiative for basic income ended without enough signatures to go to parliament.

For the past year, a grassroots movement in Spain has been very actively campaigning for the introduction of a basic income by means of a national popular legislative initiative (ILP). Thanks to the efforts of a growing number of basic income supporters, approximately 185,000 signatures were collected – less than the threshold of 500,000 signatures required for the initiative to be examined by the national parliament. The exact number of signatures still have to be counted by national authorities after a validation check.

Although the number of signatures collected is considered lower than hoped – organisers said the campaign contributed significantly to spreading the idea of basic income across Spain.

The initiative “ILP Renta Basica Universal” was organised by a grassroots coalition formed at a meeting in Madrid organised during the Summer of 2013. This so-called “Movement against unemployment and precarity – for a basic income now” federated various left-leaning organisations such as political movement Baladre, Civic Front, Dignity Camps, and was later joined by many other organisations and the Green Party EQUO.

While the idea of universal basic income was plainly stated in the official text of the ILP and viewed as a civic right, in practice the campaign also aimed at urging the government to implement a means-tested guaranteed minimum income in the short run. This strategy was the result of a compromise between the various organisations leading the campaign.

The Spanish Initiative officially started on January 15th 2014, right after the end of the European Citizens Initiative which collected almost 300,000 signatures at the EU level and ended on January 14th.

The period of signature collection started two months later on March 14th, and was immediately followed by an important participation in the “Dignity Marches”, a broader anti-austerity demonstration involving more than one million people who converged on the Plaza del Sol, the Central Square of Madrid on March 22nd. This was a tactical move to spread the idea of basic income among social movements in Spain.

Unfortunately, just like the European initiative, the Spanish campaign suffered from the burdensomeness of the legal procedures required to make a successful initiative. In the case of Spain, it is extremely complicated to collect signatures electronically.

In fact, over the last 30 years, only one popular initiative have successfully reached the threshold of 500,000 signatures to be examined by the spanish parliament. It was an initiative aiming at protecting victims of the mortgage crisis.

Basic income is now at the forefront of spanish politics

For a few months now, the idea of basic income has been in the forefront of political debates in Spain, a development largely due to the series of efforts provided by BIEN’s affiliate Red Renta Basica, the European Citizens Initiative, the ILP campaign and the impressive rise of Podemos. 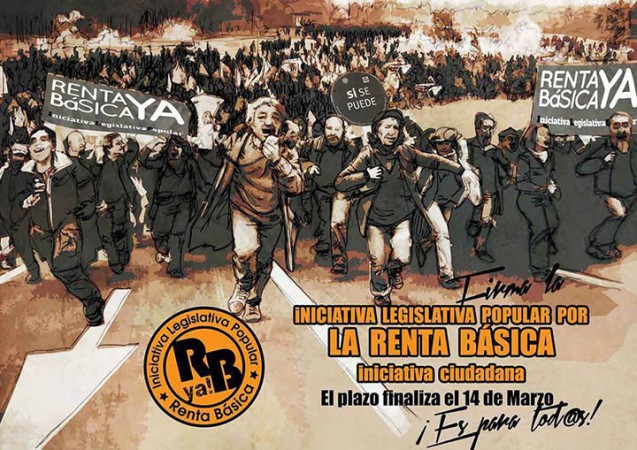 To celebrate their achievements, activists gathered last Saturday on the central square of Madrid. “The goal of the initiative was more about generating 500,000 conversations about the concept of basic income rather than just collecting the signatures” activist Jorge Martín Neira said.

Uncertain future for the movement

“The project does not end here, insisted the organizers, rather we are entering a new phase. We will not stop until this policy measure becomes reality. As people we need a more fair, human and inclusive society. This is how we will have more freedom as well.”

While activists look determined to follow up, it is difficult to predict the destiny of the leaderless, diverse and decentralized movement which was founded for this campaign.