ITALY: 50,000 signatures in favour of a Guaranteed Minimum Income delivered to the lower house of the Italian Parliament 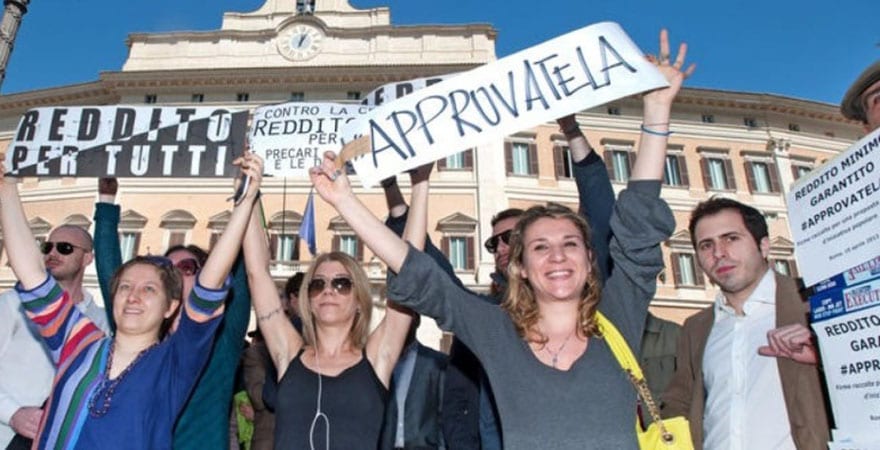 On the 15th of April, 2013 more than 50,000 signatures gathered for the campaign to propose a popular initiative bill on guaranteed minimum income in Italy were delivered to the lower house of the Italian Parliament. A delegation of the 170 associations involved in the campaign met the newly elected President of the lower house, Laura Boldrini.

Before meeting the President of the lower house, the delegation met also some MPs of Partito Democratico (Democratic Party), SEL – Sinistra Ecologia Libertà (Left Ecology Freedom) and Movimento 5 Stelle (5 Star Movement) who came out of the Parliament to express their willingness to bring the discussion on a guaranteed minimum income into the lower house. In front of journalists and media photographers they grabbed the boxes containing the signatures as a symbolic gesture and declared to be in favour of a bill on guaranteed minimum income.

A few days before delivering the signatures, the associations involved in the campaign launched a call to the new elected MPs for approval of the guaranteed minimum income bill. The call highlighted the increasingly alarming conditions of precarious workers and unemployed in Italy and demanded that MPs who during the electoral campaign put on their agenda measures addressing citizens’ economic conditions to take a stance on this issue, back this proposal, and support the necessity of introducing a right to guaranteed income.

Article based on this report (in italian)