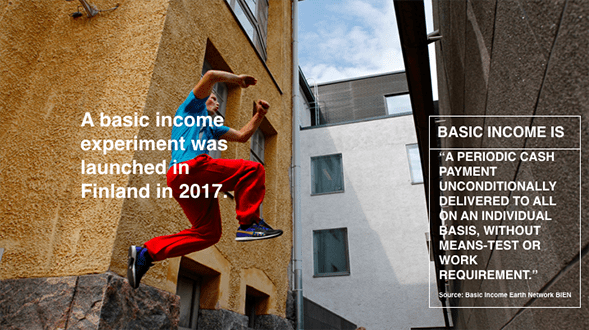 Finland’s famous “basic income experiment” is now over. The analysis program is being rolled out, and was scheduled according to the following timetable (from Kela (Finnish Social Services)).

At the end of 2018, a phone survey was made, involving all participants (2000 experiment subjects and 5000 people forming the control group), to check on “the impact of the basic income on employment, taxable earnings, take-up of unemployment benefits paid out by Kela, and enrolment in employment services”. This survey was done according to international standards on questionnaires (e.g.: European Social Survey, International Social Survey Programme, European Union Survey). Furthermore, interviews are planned to be performed in early 2019, in order to “interpret and shed further light on some of the unanswered questions and unexpected results”. To contextualize the registry data collection, phone survey and interviews, a thorough look will also be directed to public debate and popular support (or lack thereof) for basic income. This clearly means that the investigators did more than just try to answer the overarching question posed by the Finnish government at the start of the experiment: “could basic income increase employment and simplify the social security system?” (video)

Now that the experiment is over, and while the data treatment and deep analysis is being performed, BBC put together a short video piece entitled “Did Finland’s basic income experiment work?”, asking the corollary inquiry “How free money changed people’s lives?”. In a couple of interviews with experiment participants, the message coming through is that the experiment brought promises of a better, more secure life, with less governmental bureaucracy, but unfortunately it had to end (with no prospects of expansion, let alone implementation by the current government). One of those participants, Tania, told BBC that “basic income changed my life”, since it allowed her to “stand on [her own] two feet”. Another participant, Thomas, referred that the same difficulties remained, during the experiment, for getting into paid employment, which might be related to the fact that the experiment had a very small target group of people (2000), spread along the whole of Finland. That level of scattering doesn’t allow for community effects on the introduction of a kind of basic income allowance, and so the marketplace does not adjust accordingly. This seems to be aligned with one of the preliminary conclusions just published: that the experiment did not result in higher levels of paid employment for the participants.

However, the referred published report does include important (preliminary) results of other (less objective than hours in employment) analysed variables, such as Life Satisfaction, Trust, Confidence, Physical and Mental Health, Concentration, Depression, Financial Security, Stress and Attitudes Toward unconditional basic income (UBI). International basic income activist Scott Santens has summarized these results in a convenient way, which might be put into an even more succinct list (percentages refer to differences between averages of the experiment’s treatment group and the control group, over each variable):

Trust – observed an increase of 6% in other people, 5% in the legal system and 11% in politicians;

Confidence – observed an increase of 21% of confidence in one’s future, and a 22% increase in one’s ability to influence society;

Stress – observed a 17% improvement (over the number of people who responded they felt “little or no stress at all”);

It should be made clear again, if two years of the pilot itself and another of preparation were not enough to explain the real important parameters of the experiment, that what happened in Finland was not exactly a basic income (implementation) experiment. It was, as Santens put it, “a test of slightly reducing the marginal tax rates experienced by the unemployed, and also slightly reducing the amount of bureaucracy they experience”. From this to a basic income as defined by BIEN goes a long way. Nevertheless, it is remarkable that such a limited experiment, both in scope as in depth, could generate such positive preliminary results on human (generalized) wellbeing.

Scott Santens, “What is There to Learn From Finland’s Basic Income Experiment? Did It Succeed or Fail?”, Medium, February 14th 2019