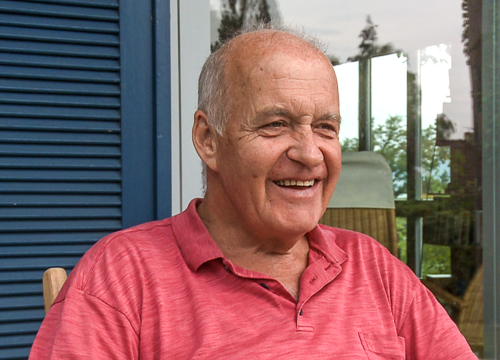 The photo of Götz Werner was taken by Enno Schmidt.

The entrepreneur Götz Werner was the best-known and most influential proponent of the universal basic income in Germany since 2005. With him, the UBI became a topic in the media and in society.

His presentation of the idea was also an inspiration and substantial basis for the Swiss popular initiative and vote on UBI and for many other activities of others on the UBI. About two years ago, his state of health no longer permitted any public appearances.

His strong public appeal and talent to inspire was not only because he had a high social status as a successful and repeatedly awarded entrepreneur, credible with his statements about economy, money and work as someone who had made it in the existing society, but it was his authentic way of putting people first. His presence made others feel joyful, uplifted and assured of a future development despite all the hardships.

His involvement with the UBI was a logical consequence of his entrepreneurial career. For him, basic income was not a contradiction to business, to productivity, but its prerequisite. If you asked him something to which you expected a business answer, he answered with human, idealistic ones. If you asked him something for which you expected a human, ideal answer, he answered in business terms. There was no difference. And what he said lived with the people in the company right down to all the branches at all levels. Not as a parroting of a corporate philosophy, but as an attitude to life and a living space.

The dm pharmacy chain that he founded has today more than 66.000 employees, 43.000 in Germany alone, almost 4.000 branches and an annual turnover of more than 12 billion Euros.

“The company is a platform for biographies,” Götz Werner said. He considered the division between working time and free time to be wrong. Because both are life time. My lifetime is me. I cannot separate myself and my lifetime. Only I can determine my lifetime. No one else can dispose of my lifetime. It is only out of my freedom and determination that I can devote my lifetime to others. But it’s always me. Freedom is not nice talk, it is the very nature of human existence. “The goal of people is freedom-generation“, Götz Werner noted. In the company, people spend their life time, develop skills and unfold their lives. That is what the company is there for. “People are not means, but ends.” They are not a means to the end (purpose) of the company, but the company is a means to the end (purpose) of the people. “A company is a social-artistic cultural event.” In the development of the company, Götz Werner could seem like a sculptor, a social sculpturer, and who sometimes keeps taking a step back to see how it is right and coherent. Action and reflection. He himself changed with his insights and with the changes in the company.

Entrepreneurs create jobs? “Nonsense,” he answered. “No entrepreneur comes into the office in the morning and considers: how can I create a lot of jobs today? Instead, he thinks: how can I optimize processes, how can I do something better for the customers?” But he had created tens of thousands of jobs with the dm drugstore chain, he was further asked. “Where we have opened a new branch, other shops in the area have gone out of business because of it. Previous jobs have been lost where we have offered new ones. New jobs are primarily created today where work is being done to eliminate jobs elsewhere.”

After countless interviews with applicants, a light came on for him: “First people need an income, then they can get involved with our working community and see where they can and want to contribute best.” First an income, then you can engage in the work. Notice the order. That is the order of the free man.

At an event at the University of Karlsruhe, he called out to the thousand listeners: “Your work and the work we all do can never be paid for. But an income makes it possible.” Because my work is my lifetime and my contribution to others. This cannot be paid for because you cannot buy people. Income makes work possible. It does not pay it. “In our society based on the division of labor, we all live from what others do for us. The more productive others can be, the better for me. So it makes sense to create the best conditions for everyone to be productive.” This framework is the UBI. ” Work costs nothing. But everyone needs an income. And everyone works. Even the unemployed. They work too. They also do something. Everyone wants to work, wants to do something that makes sense, for which they experience appreciation.” “Only with the UBI we have a free labor market.” For a free market presupposes the freedom of market participants to be able to say no to a bad offer and yes to a good one. No to underpaid bad or pointless work. Yes to something that makes sense, that I want, even if the pay is not high or it is not paid at all. For Götz Werner, it was evidence from his professional life that made it clear to him that wage dependency stands in the way of real cooperation on an equal footing. Of course, earned income remains beyond the basic income. But the question of existence is not tied to a paid job or the requirements of social welfare. “Today, many people do not have a working place, but only an income place,” Götz Werner remarked. Needless jobs that only give an income and power to the employer to rule about staff. This fits with what David Graeber described in his book Bullshit Jobs.

But how can a UBI be financed, Götz Werner was asked again and again. And again and again he answered: “It’s already financed, isn’t it?” Incredulous amazement on the part of the questioner. “Yes, we live in paradisiacal conditions. We have enough goods and services for all, and we could produce even more. Everything that can be produced can also be financed. Provided one has the good will to do so.” Götz Werner saw: The fact that we are all alive proves that the basic income is already financed. If someone did not have even as much as a basic income, in whatever way, they could not live. This basic income is made unconditional. We look at economics under “a money veil”. We do not live on money. You can’t eat money and you can’t wear money. “We live from what others do for us.” And there is enough of that and could even be more. We no longer live in times of scarcity. That is why the basic income is already financed. Because the goods and commodities and services are there. Money is only a legal means of exchanging goods and services.

And how does the funding take place in practice? Götz Werner’s friend and advisor Benediktus Hardorp had explained VAT to him. Götz Werner understood the advantages. Not elevating taxes where people do something for others, income, but where we all claim the services of others for ourselves, consumption. Much more correct and fairer, much simpler in the calculations. Only value-added tax, all others no more. But he wondered: Where is the social component in VAT? And he came up with it himself: an unconditional basic income amount to all economic participants, that is, to all people, all consumers, paid out at the beginning of the month as a refund of the VAT to be paid in the prices in the extent of the necessities of life. For him, VAT and UBI belonged together. They complement each other and pull in the same direction. Releasing the initiative of the people.

Because Götz Werner’s portrayal of the UBI had grown out of entrepreneurial activity, out of insight and evidentiary experiences, because it did not mean or favor any class of society, but rather the human being in his freedom, of which work is a part, he had an effect on people.

Götz Werner has given his shares in the company to a foundation. When his health began to deteriorate, he decided to bundle his financial support for the debate on UBi into an institution and the science and, together with his wife Beatrice, to endow a professorship at the University of Freiburg. The Götz Werner Chair with Prof. Bernhard Neumärker as chair holder. The dm Werner Foundation also finances the Freiburg Institute for Basic Income Studies, FRIBIS, at the university of Freiburg, Germany.

His son Christoph continues to run the company. He has adopted one of his father’s mottos: “Who want, find ways, who don’t want, finds reasons.”