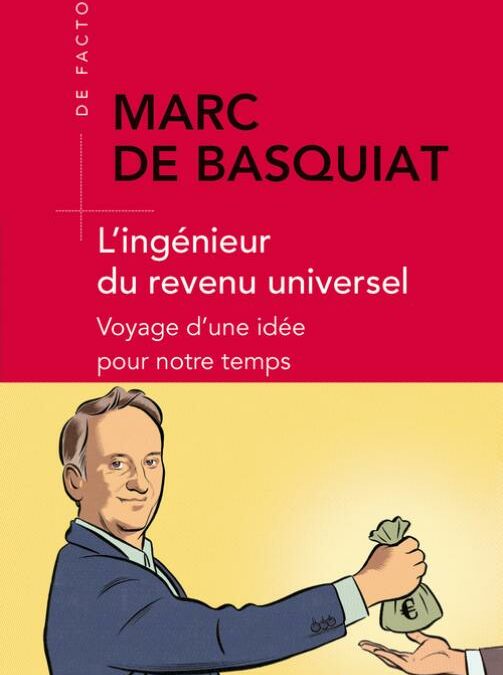 In The Basic Income Engineer (not yet available in English, unfortunately), Marc de Basquiat invites us to embark upon a journey of discovery on the subject of Basic Income. Each chapter draws on a personal experience to illustrate his point and marks a milestone in his intellectual development. The author does not reveal much about his private life (we learn in passing that he has many children). However, this engineer by training and sensibility unabashedly shares the joys and frustrations that have punctuated his journey in search of solutions rather than truths.

He describes himself as a right-leaning by culture. His book reveals, on the contrary, a passionate person with a resolutely left-wing heart, underpinned by great scientific rigor. With his doctorate in economics acquired late in life, de Basquiat has been involved in all aspects of Basic Income research and advocacy: as a founder of the French Movement for a Basic Income (MFRB) and president of the Association pour l’Instauration d’un Revenu d’Existence (AIRE), he knows everyone.

Unlike most Basic Income theorists, who are little concerned with the practical side of things, de Basquiat distills the concept down to a simple formula and brings it to life by quantifying it: €500 per month minus 30% of income. It is this easy to understand and democratic (since it applies to everyone) formula that he successfully defends throughout his work.

The great strength of this book is that the reflection does not stop at the sole question of a Basic Income. Many other issues must be tackled simultaneously to ensure a better quality of life for all. De Basquiat is not a philosopher: so much the better! There are enough of them as it is who stir the economic pot without ever sitting down at the table!

For example, to ensure decent housing for all, he proposes a mechanism that would allow everyone to find housing in exchange for a quarter of their income. His best idea, in my opinion, is the proposal to levy a wealth tax of 0.1% per month (since life lasts about 1000 months) applied equally to the lords of the manor with assets worth 2 million € and to the owner of an old jalopy worth 1000 €. The first one pays 2000 € per month, the other just one euro. It’s an original and disarmingly simple concept that has enormous potential to transform mentalities and strengthen social solidarity. It is also a clever update of Thomas Paine’s Agrarian Justice, to which Basic Income supporters all claim allegiance, without taking full advantage of Paine’s message.

There are some proposals in the Universal Income Engineer that put me off. I can’t accept that an employer can purchase with his payroll contributions the right to direct his employees. A license to lead slaves cannot be bought. But de Basquiat is only describing how things are. Indeed, the power to manage employees is granted free of charge to anyone who sets himself up as a boss.

It is refreshing to see the socio–economic problems of our time treated in a global and integrated way, with rigour and without any ideological bias. It’s an engineering tour de force. And all this while raising a big family!