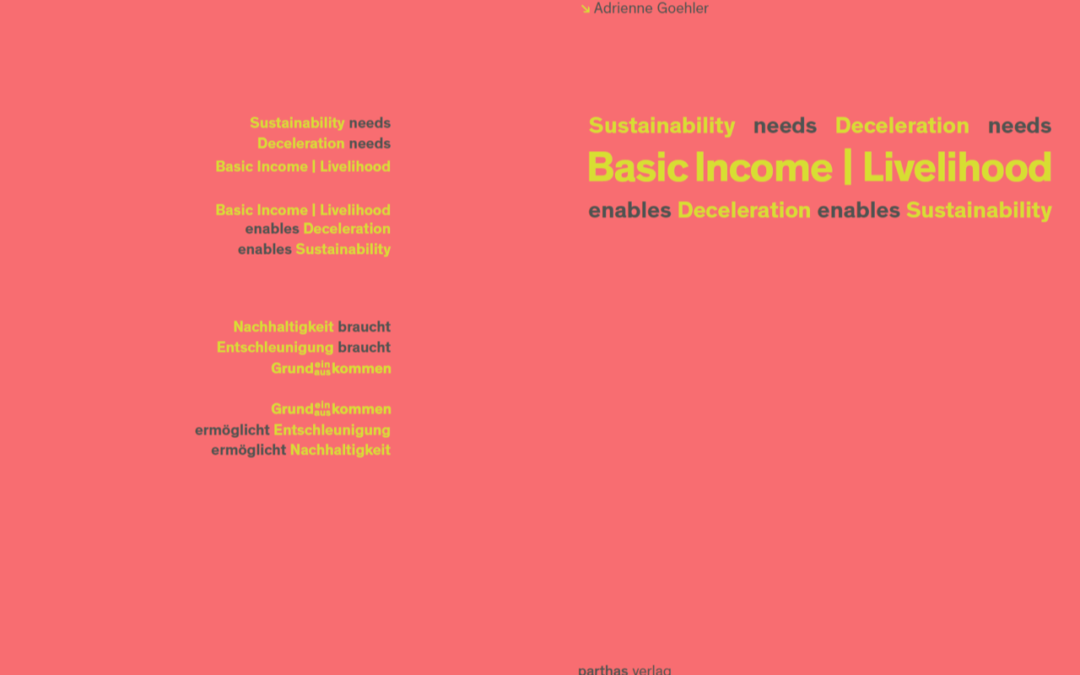 Earlier this year we announced the publication of Adrienne Goehler’s new book on Basic Income. The article appears below. An English translation is now available, which can be downloaded here.

This new edition features additional material: an interview with Sarath Davala, and an essay by Julio Linares.

To read an interview with Adrienne Goehler, click here.

Adrienne Goehler has provided the following translation of the website page about the book:

If we had unrestricted basis income for everyone, what would the consequences be? Would it increase freedom and equality and so dim down the ever faster accelerating times? Would it help to save the environment with its restricted resources?

Over the last two years, Adrienne Goehler has been addressing these and other burning questions of our time while working at the “Institut für transformative Nachhaltigkeitsforschung” in Potsdam. In this book that presents the results of her inquiries, she embarks on a journey from research to politics to art. She invited people from the most diverse parts of society to contribute essays, interviews, stories, images, and artistic interventions concerning the relationship of sustainability, deceleration, and basic income. She constellated insights into the financial world with suggestions contributed by experts in agriculture, development policy, climate change, and ecology. Artists address the most important questions of our time: What do we need for a good life and do we have enough of it for all of us? How will “work” look like in the future, and who will be employed? If we learn to think of unpaid and poorly paid social work as equally important as other kinds of work, will that lead to more gender equality? How do we identify meaningful tasks that would fulfill our lives? And last not least: Would implement an unconditional universal basic income as a basic human right be in tune with the seventeen goals of sustainability, as declared by the United Nations? The book offers insights into the possibilities and contradictions of our actions. It presents all the important aspects of contemporary debates concerning universal basic income. A passionate wake-up call: We need to break out of frozen patterns of thinking and acting, strive for knowledge, and move around more freely.

Complaints about acceleration were already associated with industrialization, but in its present extent, its intensification and radicalization, it no longer concerns only working conditions, but the whole of life. Acceleration has totalized itself. The philosopher Byung-Chul Han, author of the book “Fatigue Society”, describes the most important change from capitalism in Marx’s time, when factory owners and workers faced each other in a clearly defined relationship of exploitation, to today’s self-exploitation relationships, in which people became entrepreneurs of themselves, caught in the illusion of self-realization. Thus neo-liberalism formed the oppressed worker into a free entrepreneur who worked incessantly on his self-optimization. We are constantly saving time through faster transportation, fast food, faster information media and tools, and therefore we are packing more and more into the day. Hartmut Rosa calls it, “quantity increase per time unit”. We believe that we have to be available 24/7, as if we were all on call at all times. The present with its unreasonable demands makes us pant, our fantasy lies idle under states of exhaustion and multiple fears. We find ourselves in a hamster wheel whose speed we cannot determine and which many believe we cannot leave. The significantly high increase of depression and burnout are symptoms of this too much, which is at the same time a too little. The time researcher Barbara Adam therefore states: “We need not only an ecological ‘footprint’, but also a ‘timeprint’. I remember with longing “Momo”, the character in Michael Ende’s novel. Momo realized that anyone who has the time of mankind has unlimited power. She brought back time stolen by grey ‘time thieves’ to the people, when she realized that by saving time people had forgotten to live in the now and enjoy the beauty in life. And I am thinking of John Franklin, the polar explorer, whom Stan Nadolny memorialized in his novel “The Discovery of Slowness”, because his perception refused everything fast and superficial and transformed slowness into calm. Time and the feeling of permanent acceleration, breathlessness, is the subject of many interviews. I also feel connected to the idea of deceleration as a further prerequisite for the chance to lead a sustainable life. Hartmut Rosa, who imagines the process of the great transformation as successful only in connection with a different way of dealing with time, is also connected to this idea. And with a basic income.

In addition to the immense challenges outlined above, there is another Herculean task: the comprehensive redefinition of life and work as a result of ongoing digitalization, with which gainful employment will change qualitatively and quantitatively in a variety of ways, some of them very fundamentally. In conjunction with the increasing importance of the service sector, a working society is emerging in which a growing part of the population does not have continuous, let alone lifelong, gainful employment, but instead works independently or on a project-based basis, often accompanied by poorer pay and greater insecurity.

With the start of the digital age in 2002, people were able to store more information digitally than in analogue form for the first time. Another ten years later, the term ‘Work 4.0’ came into circulation to describe the fourth industrial revolution.

Since then, there have been a large number of studies that look at the impact on working life to date. Many of them assume a significant loss of traditional jobs, which will in future be done by machines, and predict radical changes. A frequently quoted – and now also widely criticized – study by the scientists Osborne and Frey from Oxford University assumes that 47 percent of gainful employment in the USA is at high risk of being automated in the coming years. The Davos World Economic Forum estimated in 2016 the number of jobs that will be lost in the next five years in the 15 most important industrial and emerging countries as a result of the “fourth industrial revolution”, 5 million. Women’s jobs were particularly affected. Companies such as Siemens, SAP, Telecom and the big ones in Silicon Valley agreed with these forecasts, which clearly boosted the discussion about an unconditional basic income, because it was strengthened by a rather unexpected side.