Basic Income as 40 Acres and a Mule

This whole program is voluntary…The men don’t have to…if they don’t want to. But we need you to starve them to death if they don’t.

Basic Income does something virtually no other policy in the modern economy can do: it protects your status as a free person.

What does it mean to be a free person? Consider an answer given by someone who experienced chattel slavery. Garrison Frazier was the spokesperson for a delegation of former slaves called “freedmen” (although many were women) who met with General Sherman on January 12, 1865, before the end of the U.S. Civil War.

Asked what he understood by slavery, Frazier replied, “Slavery is, receiving by irresistible power the work of another man, and not by his consent.”

He defined freedom as, “taking us from under the yoke of bondage, and placing us where we could reap the fruit of our own labor [and] take care of ourselves.”

Asked how best to secure their freedom, Frazier said, “The way we can best take care of ourselves is to have land, and turn it and till it by our own labor.”

The story of what happened after the meeting has come to symbolize broken promises to African Americans, but it has much greater significance for everyone. Sherman distributed land seized from former slave owners to freedmen in a large area of the southeastern coast, sometimes along with surplus army mules. Rumors spread that all freedmen would receive 40 acres and a mule. Less than a year later, the Federal Government reversed Sherman’s order, restored the prewar property rights of former slaveholders, and forcibly evicted the freedmen, many of whom had to work for their former masters, taking the least desirable jobs and the lowest pay. Some descendants of slaves continue to serve the holders of those property rights to this day.

The significance of Frazier’s request for land to secure his freedom is not that freedom requires the opportunity to become a subsistence farmer; it requires the freedom from indirectly forced labor. Frazier recognized that the legal self-ownership slaves were granted at the close of the war was not enough to make the fully free. It does not free an individual from the “irresistible power” to do the bidding of others. Individuals who are prevented from working for themselves alone (and not sufficiently compensated for being denied that option) are forced to work for someone who controls access to resources. Forced labor is unfreedom whether that force is direct or indirect.

The freedom from indirectly forced labor has been taken away from the vast majority of people in the world today—when governments forcibly took control of the resources of the Earth to give them to their most privileged citizens. These newly established “property rights” not only gave privileged citizens control over resources: it gave them control over people. People who had shared access to those resources for thousands or even hundreds of thousands of years were now forced to provide services for the wealthy to maintain their most basic subsistence. Eliminating indirectly forced labor is not all there is to ensuring everyone is fully free, but it’s an essential step.

We have owed each other a Basic Income since we enclosed the commons, since we abducted the slaves, since we killed the Buffalo.

NOTE: this essay includes a long excerpt from Chapter 2 of my book, Freedom as the Power to Say No: Independence, Propertylessness, and Basic Income 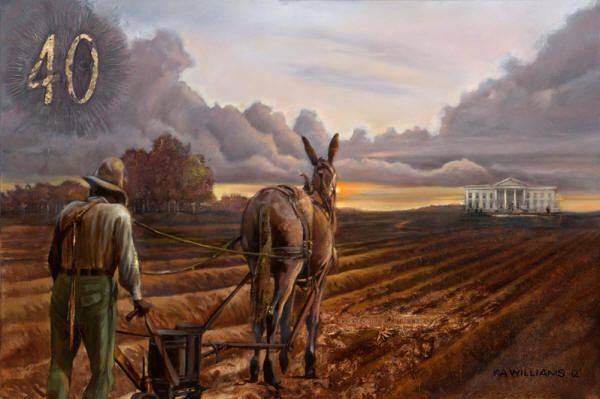