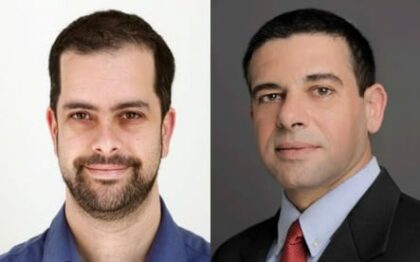 Economists Ori Katz (picture: on the left) and Michael Sarel (picture: on the right) believe the implementation of basic income is a task both necessary and desirable in the near future, within the Israeli social reality. So, as researchers, they conducted a thorough study on basic income applied to the economic reality of Israel (used figures from the year 2016). In that study, they considered the elimination of existing (conditional) benefits, abolishing tax exemptions and raising income tax as the financing mechanisms for sustaining an unconditional basic income for all the population.

If adopted in Israel basic income would, according to Katz and Sarel, induce significant bureaucratic savings, encourage employment, eliminate the poverty trap, reduce friction between citizens and the authorities, increase individual freedom of choice, (slightly) reduce inequality and reduce incentives to work in the black market.

In the conclusions it can be read:

Basic income is not a panacea to all the ills of the Israeli economy, and it is unable to create money “out of thin air.” However, it is a more effective way of providing a safety net for the entire population than the current welfare system, and it eliminates the perverse incentives this system creates. As a result of the transition to basic income, Israelis will be able to work, study and manage family life and relationships of their own accord, without fear that their income will be affected due to their choices and without having to justify the way of life they chose. Overall, we believe that this is a saner way of subsisting as a human society.

Leave a comment Israel, Research study
The views expressed in this Op-Ed piece are solely those of the author and do not necessarily represent the view of Basic Income News or BIEN. BIEN and Basic Income News do not endorse any particular policy, but Basic Income News welcomes discussion from all points of view in its Op-Ed section.