Europe: An EU citizens initiative for a Carbon Fee & Dividend is collecting signatures 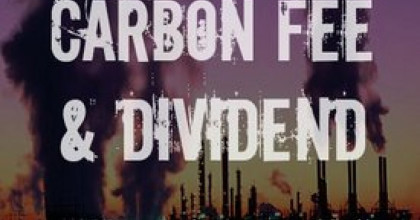 An European Citizen’s Initiative on the application of a carbon tax-citizen’s dividend scheme has been accepted by the European Commission (May 2019) and is, at the moment, collecting support signatures (up until May 2020).

The initiative calls for the application of a Carbon Fee, collected by European Countries, to be redistributed entirely through the general population, with no attached conditions. The scheme rests on three main pillars: the collection of the Carbon Fee, as upstream as possible in the fossil fuel economic tree; the distribution of the Dividend to European Union (EU) citizens, with only a small part of it used to pay for its administrative costs (governments do not keep any of the collected revenue); the introduction of a Border Carbon Adjustment, guaranteeing that EU businesses and industries do not suffer from unfair competition from countries with no such carbon fee and dividends policies (pollution intensive products entering the EU would pay a tax and exports from the EU would be refunded).

The scheme is based on solid research concerning carbon emissions scenarios, climate change and carbon pricing in order to reach Paris Agreement goals (for the EU). According to the IPCC, carbon prices should gradually be raised to around 13 times what they are today, so that a 2ºC maximum increase in global temperature is attained. Naturally that only rising prices on carbon-intensive products and services is regressive on its own, tending to hit harder on the vulnerable and poor. Hence redistributing the proceeds through the entire population ensures that lower income people will afford to pay for the goods and services they need, and the wealthier – who usually bear a higher per-capita carbon footprint – will generally lose out economically under this policy.

According to the initiative instigators, there is wide support for this kind the general Carbon Fee & Dividend policy, which they hope will be materialized in the collection of signatures process referred to above. This support has been voiced by scientists, economists, NGO’s, industry and EU citizens.