Andrew Yang’s Main Goal: Abolish Poverty and Make the Wealthy Pay For It – A Reaction to Chapo Trap House 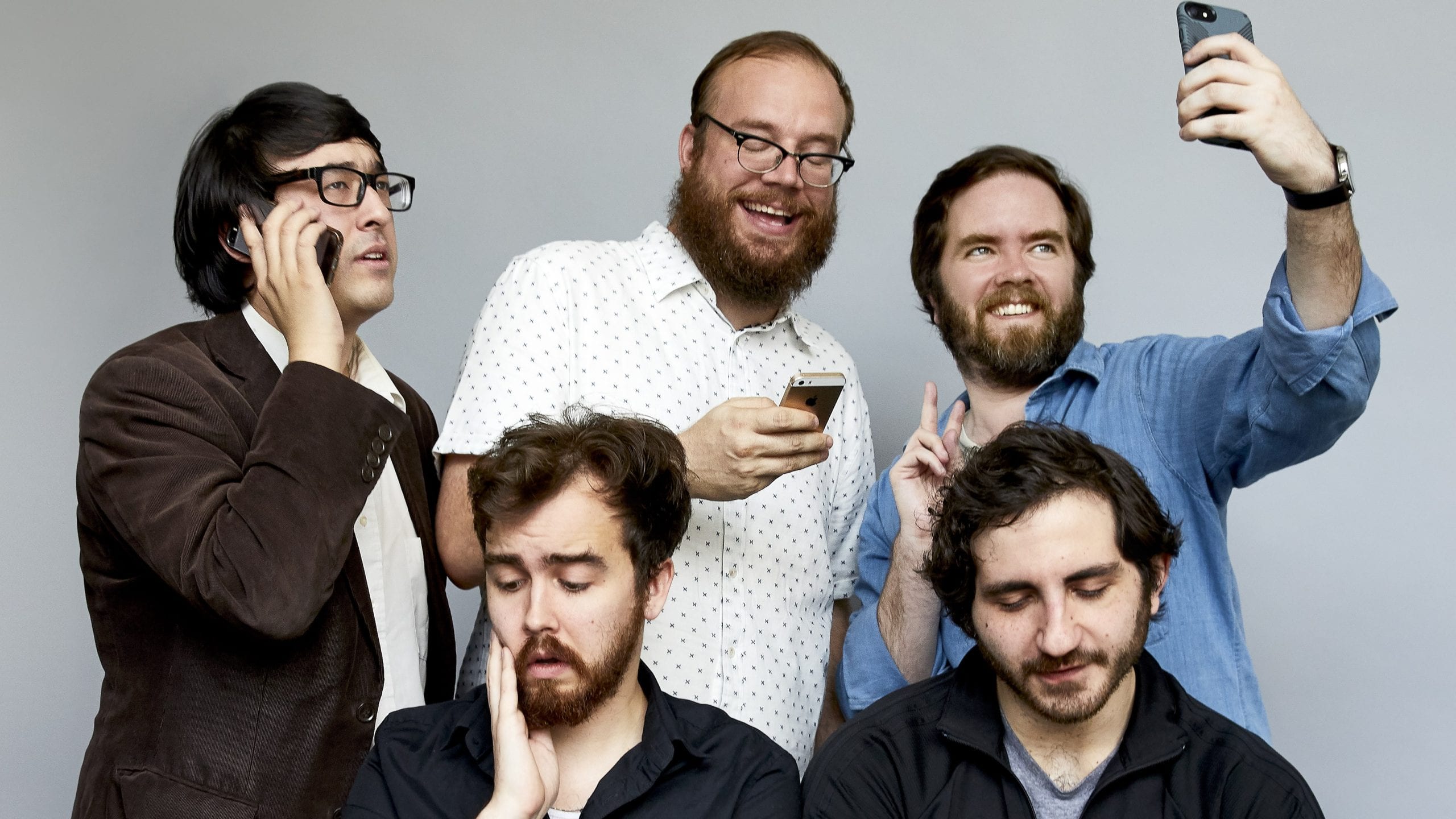 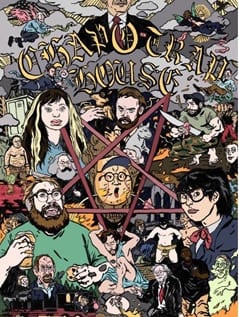 Chapo Trap House is known for bringing an irreverent, jokey style to US left discussion.

Andrew Yang’s interview with Virgil Texas on the podcast Chapo Trap House helps to answer a lot of questions that keep coming up as his candidacy is debated. After a little while Virgil brings up concerns that one often encounters in debate around basic income.

Full disclosure: I interviewed Andrew Yang a year ago and plan to vote for him. Most of my political training and viewpoint is left-wing. I have fond feelings and understanding for many friends who plan to vote for Bernie Sanders or Elizabeth Warren.

Yang avoids ideological language. He has embraced the slogan Scott Santens often uses of “Not right, not left, but forward.” That is not a slogan for me. I recognize that basic income is a policy that could be attached to any ideological program. I’ve written about that. I would call Yang’s Freedom Dividend a left policy proposal precisely because it re-allocates wealth from the rich to the poor. Yang is proving that basic income (and a diagnosis of “disintegration”) can get the attention of non-voters and even Trump voters.

My goal here is to do a little bit of translating and clarify a couple of points that I have seen raised on cable news and in left magazines. One hears these same points from political newcomers in online Yang discussion pages. Millions of people are thinking about a basic income for the first time. I am sticking to three points that Yang raises in this interview and that I have seen him make elsewhere.

(1) The Value Added Tax. I asked Andrew Yang about the VAT because I was not quite sure it was the best way to go. When you find out why he wants it, you can be better assured that he is ready to take on the one percent.

Yang’s reason for using the VAT to raise about a third of the Freedom Dividend is that it would capture a lot of the revenue that companies like Amazon and Google are making without having to pay tax. Even more important, Yang makes it clear that he will keep looking at ways to make sure these giants of the new economy pay their fair share. He stresses in this interview that we should “Go where the money is.”

Chapo’s Virgil is not certain about the VAT for the same reason progressives often oppose sales taxes. Yang is clear that “in a vacuum” this would not be a progressive tax. With the dividend, it moves money from the wealthy to everyone else. Yang makes it clear that he also believes in funding the dividend through a carbon tax and a financial transactions tax as well. He would also like to see an increase in marginal taxation of income and wealth.

We should support various, multiple taxes in order to support everyday government and a basic income guarantee. There is less incentive for the wealthy to dodge a tax if there are different kinds in play. The VAT is featured in most of the social democracies that we on the left point to as evidence that good policies can improve social outcomes.

It should be clear now that Yang is NOT the “Silicon Valley candidate”. Everyone who is getting a free ride will end up paying into the dividend and into Medicare for All). That is the goal here. The VAT is a means to that end. A lot of workers in Silicon Valley might share his concern about automation but that is very different from calling him the candidate “of Silicon Valley”. You can bet that Yang is Peter Thiel’s worst nightmare. Yang cites the fact that so many tech companies are untaxed right now as a reason to bring something else into the party. If a VAT doesn’t work, he will try something else.

When it comes to taxing the wealthy, Yang goes further than any of his opponents. Moderates would just repeal previous past tax cuts. Without the dividend, other left candidates run the risk of backlash as people wonder if these new policies really include them.

(2) The size of the dividend. Will $1,000 a month do the work we want it to do? Virgil makes two very different points. First, he points out that there were many periods of his life when even one tenth of this amount per month would have been extremely helpful. Second, he gives cases in which this amount would not help much. Yang’s particular proposal does not give a share until one reaches 18 years old. (I would prefer they be included. I can tell you that, every day, I encounter strong opinions on both sides of this issue.)

Yang wants to point out that a single mother would get her dividend and know that the kid is getting the dividend in the future. He did not say that this was something that many voters can’t get their heads around. Millions of Americans think that low-income people have kids in order to get welfare. That simply never happens.

This is a very interesting line of discussion we are now seeing. I will summarize it:

Therefore, we should reject this plan.

The problem with this line of argument is that we are left without any dividend at all. If $1,000 a month is not enough, then zero is much worse. Very few people are arguing for zero basic income, but that is where we are now. Virgil Texas does not reach this conclusion. It is a very friendly interview. But we do run into this a lot. What should we do if we think this amount proposed is not enough?

Andrew Yang is very clear that his goal is a dividend that, combined with Medicare for All, would abolish poverty. This is why he is not talking about gutting current support systems. Everyone who gets support of any kind will have the option of keeping it or going with the Freedom Dividend. He reiterates that when he says “go where the money is”, he knows that low-income people aren’t who he’s talking about. He commits in this interview to tinkering to make sure that this dividend is sufficient, given the expenses that are out there, as well as any price changes in play due to the VAT or carbon tax.

People who say that an extra $1,000 a month is not enough to matter have not seen what low-income people are already doing with what they have. There are many, many communities that are politically invisible. Nothing will increase their ability to develop the stuff of good living—restaurants, shops, studios, dance schools, gyms, etc.—than a dividend. Yang also points out that many people do not get valued by our market at all who should be. Here he includes home-makers and those who care for the elderly in their family.

Some people are worried that this dividend will not matter because of the taxes in play. Sure, it would be bad to get a check and then lose it all to taxation. We only need to be aware of how much more commerce, pollution, and financial transactions are the property of the top ten percent and top one percent of US society. Again, Yang is committed to making sure that the dividend is enough to accomplish the goal of a secure share for all.

Once any amount is secured, we can call to raise it.

(3) Capitalism and “entrepreneurship”. Early in the interview, we hear that the word “entrepreneur” includes a lot more people for Yang than is typically the case. Starting a family or taking care of elderly relatives is included. He also includes creative work, citing the many studies showing that “creatives” improve quality of life and are an economic engine. This is all part of his quest to improve our measurements of economic progress. The Gross Domestic Product and the Stock Market keep improving, even while life expectancy is going down for the first time in the US since the Yellow Fever Epidemic. 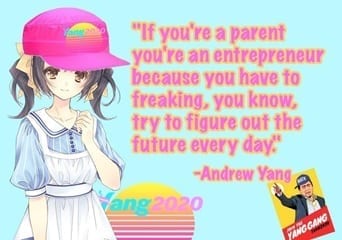 This meme is “not my style” but we are seeing conversations like this blossom once people get on board the idea of a dividend for all.

This can be a translation issue for the left. Yang’s “capitalism” and “entrepreneurship” just aren’t the sorts described in our business schools and on television. I tried to address some of these translation issue in an earlier piece for Basic Income News. My main goal there was to get us to think of caregivers and organizers alongside business start-ups. The word “capitalism” puts an image in my mind of someone taking a portion of everyone else’s wealth. I think of Wall Street. Andrew Yang is thinking about markets. To understand him when he says “human capitalism”, think about Main Street in a “nice town”. He wants a lot of that everywhere. This is one reason he wants to improve our measurements of economic well-being. If we can develop better ways of tracking well-being, then an increase in creative and political organizing power (as well as consumer, labour, and negotiating power) will appear in those new measurements. Interestingly, Bernie Sanders and Elizabeth Warren often point to images of Main Street. We shouldn’t let the right own this imagery. They offer nothing to promote actual markets.

The comments on Chapo Trap House’s twitter page include a lot of positive reaction but they can run pretty bad. There is a lot of projection. A lot of people just did not listen to the interview but commented nonetheless. The idea that Yang’s Freedom Dividend is a “neo-liberal trojan horse” should be rendered completely absurd for anyone who listened to this interview. Yet, I have seen this phrase used by credentialed opinion-makers. I do not link here because I want to leave room for them to change. 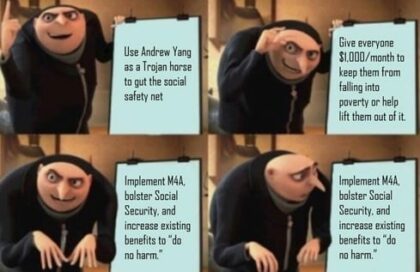 This sums it up. Creator unknown. “M4A” means “Medicare for All”

Once we win a basic income guarantee, I hope that more people engage in social critique and I hope that solidarity, class analysis and Marxist critiques of alienation and exploitation are important parts of this. The dividend will increase the number of people who can participate in that new debate. And that participation is already starting, as put by a contributor on Facebook:

The US left needs to embrace basic income. Interviews just like this one brings us closer to making that happen. Those who stick to other candidates can still make it clear that they support a basic income. They can also support Rashida Tlaib’s “Lift Plus Act” which would issue a $3,000 / year grant to all. This measure would reduce the number of people in poverty in the US by forty-five percent. Who can say “no” to that?