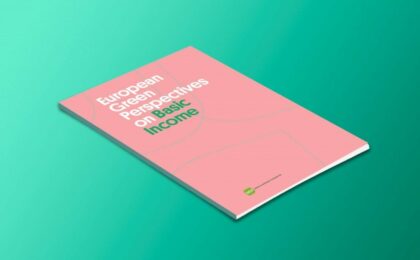 The Green European Foundation (GEF) has published its report on UBI: European Green Perspectives on Basic Income, on 18th February 2019.

GEF is one of the ‘political foundations at European level’ (a.k.a. Eurofoundations) that are research and advocacy organisations funded by the European Parliament.

GEF ran a project ‘Basic Income for all EU citizens?’ for the past two years (2017-2018). This report is one of its outcomes. The report’s forewords by Susanne Rieger and Ville Ylikahri outlines the aim of the project: ‘investigating the [UBI] proposal’s potential in relation to employment, the recognition of work beyond paid work, and the gendered division of the labour’ (p.5). This threefold aim is in sharp contrast to the narrow focus of the Finnish Government experiment run concurrently with the GEF’s project. The Finnish Government only focused on employment and paid no attention to unpaid work and the gender division of labour.

The report contains the accessible introduction, ‘Twelve Questions and Answers on Universal Basic Income’ by Natalie Bennet, a former leader of the Green Party of England and Wales. It is followed by 9 substantial articles. The report’s concluding chapter evaluates the EU-wide UBI proposal from ‘Social Europe’ perspective.

You can access PDF of the report or order a hardcopy here.

Leave a comment Europe, Greens, Social Europe
The views expressed in this Op-Ed piece are solely those of the author and do not necessarily represent the view of Basic Income News or BIEN. BIEN and Basic Income News do not endorse any particular policy, but Basic Income News welcomes discussion from all points of view in its Op-Ed section.