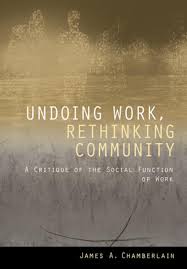 Chamberlain’s book explores universal basic income (UBI), which he calls unconditional basic income, as a potential step on the way from a “work society,” in which individual gainful employment is placed at the center of citizenship and community membership, to a post-work community in which the wellbeing of others is valued over individual achievements. Undoing Work, Rethinking Community focuses primarily on the UK and the US, moving through a detailed discussion of the place of work in contemporary life and politics, as well as more recent changes that have witnessed a gradual erosion of worker’s rights and stability, contending that the current overvaluation of work undermines freedom, equality, and justice. It then outlines a potential role for UBI in Chamberlain’s vision of the transition away from the work society, along with guidance for UBI advocates who share similar priorities with regard to shifting the conversation from its focus on encouraging employment. Finally, it sketches the theoretical beginnings of a “post-work” community.

Employment in Politics and the Meaning of Citizenship

Chamberlain begins by touching on the centrality of work and employment as a right and citizen’s obligation to the campaign rhetoric on both sides of the US 2016 election. Beyond America, he also points out 2011 UK Prime Minister David Cameron’s focus on employment as a solution to riots through the words “work is at the heart of our society.” In his very first pages, Chamberlain outlines his central contention: that citizenship and social participation are conditional upon employment and that those who are not able (or do not desire) to pursue employment for any reason, be it ability, other priorities or means of subsistence, family responsibilities, etc., are marginalized and configured as social pariahs or “freeloaders” rather than good citizens. In essence, he argues that society itself is currently understood to be the product of collective labour, and thus the work society values work ethic, the independence it permits, and the full citizenship or social participation made possible by said independence.

Interestingly, Chamberlain traces a brief history of types of “dependence” that used to be considered socially permissible or positive (that of a wife, for example, or the elderly) but have become more and more suspect, such that one must demonstrate the reason for one’s dependence (i.e., in the case of pregnancy, disability, or other inability to work) or show that one has paid one’s dues (in the case of the elderly) or is preparing oneself for employment (in the case of youth in school).

Undoing Work outlines the roots of the work society in history and political theory and examines several of the key arguments that connect work to citizenship. For example, the idea that individuals exist outside of society but collectively create society with their labour implies, in turn, that a lack of gainful employment is necessarily anti-social. This can be tied to a kind of apocalyptic, chaotic rhetoric, saying that unemployment will lead to social unrest and disintegration (as in David Cameron’s focus on employment in response to social unrest).

What is the problem with this social emphasis on everyone “pulling their weight”? Chamberlain argues that it limits the freedom to act according to one’s own “values, needs, and desires,” (10) when a person needs to take any or all employment available. Freedom is also limited when all of one’s time is occupied by making money with no opportunity to spend time on activities that don’t have a price put upon them. Furthermore, the increase in information technology has begun to dissolve the boundaries between work and the remainder of life. Importantly, restrictions to freedom do not fall equally upon a population, with regard to access to greater varieties and qualities of employment: “One can understand justice as equality of freedom or, more specifically, the equal ability of all members of society in ways that reflect their own ends” (12).

In his third chapter, Chamberlain discusses the idea of increasing flexibility of employment, from Reagan and Thatcher to the gig economy and the increase in remote work. Flexibility is a double-edged sword. Half of it entails deregulation, erosion of support for workers, increased precarity in terms of employment and compensation, dissolution of work–life boundaries, lack of collective bargaining, and other employer-friendly policies. Many qualities of flexibility can also be worker-friendly, however: flexible scheduling and the dissolution of work–life boundaries may allow a person to work from home or on their own time, or it may ask them to devote significant quantities of their life to work without any additional compensation. At least there are solutions available to offer support to those remote working away from the office so that they can receive additional training and mentorship from wherever they may be and still progress in their careers. Without the support, those working from home may quickly find themselves without motivation and disassociated from their work colleagues. Companies have begun to look at ways to combat this by finding virtual team building activities such as the ones you can see at BreakoutIQ. This is in the hopes of instilling a sense of comradeship between co-workers.

If our jobs are becoming increasingly flexible and precarious, allowing us to participate socially in a complete manner and support ourselves as independent citizens less and less, then UBI is one way to fill that gap and allow people to continue to find meaningful employment: however, it is just this argument for UBI that Chamberlain finds suspect. In Undoing Work, UBI is established as a partial solution to many of the aforementioned issues, a very important stop-gap permitting what he claims is actually required, which is to dismantle the work society and the social value of employment.

Chamberlain identifies an ideological disjuncture within the UBI movement, between advocates who say that UBI will support employment and advocates who contend that supporting employment is beside the point. This is echoed in the works reviewed by BIEN, as emerging UBI research and economic simulations define different metrics for success, and many of them are focused on employment rates rather than health indicators or other measurements associated solely with wellbeing. Undoing Work places UBI proponents on a spectrum from a full commitment to the work society to the preference for freedom from employment/right and ability to refuse employment. However, Chamberlain acknowledges that some who have argued for UBI’s positive impact on employment rates have done so for the sake of expediency. In other words, supporting a truly Unconditional BI may necessarily be politically precarious due to its promise to give “something for nothing.”

Chamberlain then contends that UBI’s implementation and effects depend upon the ideologies of social participation and citizenship by which it is surrounded. Whether or not a UBI recipient lives in Chamberlain’s “work society” will have a significant impact on a basic income’s ability to transform their lives for the better.

To highlight his point, Chamberlain contrasts UBI with workfare/unemployment and means-tested benefits, examining the differences between the administrative goal of re-integrating a person into the workforce and UBI. An implementation of the latter without a corresponding ideological shift may simply result in social forces creating the same stigmas against and marginalization of those who appear not to be contributing in a normative manner. In other words, without a cultural change in the value of work, people receiving UBI will still feel the pressure to take jobs regardless of interest or aptitude. From the perspective of a reader perennially curious about the intercultural differences in UBI implementation around the world, this is an interesting and important point, though it is beyond this book’s purview to speculate about the international differences that might be seen in UBI implementation depending on each country or region’s ideological variations.

A more radical implementation of UBI may in fact encourage people to shape new “purposes,” voluntary or collectively informed but not necessarily rewarded or validated by a wage. Indeed, if work is as essential to a valuable and meaningful life as its proponents suggest, Chamberlain suggests that it is unlikely that UBI recipients (i.e., all of us) will simply give up any kind of occupation or responsibility.

The final chapters of the book examine visions of a post-work society. Chamberlain suggests that many contemporary visions of post-capitalism (e.g., André Gorz’s work, or Hardt and Negri’s Empire) have not in fact theorized a real “post-work” society because they remain centred upon community-oriented production and reproduction: they still see the common/society as produced by some form of work or labour, and participation in their post-capitalist models is still frequently predicated upon social contribution conceptualized as labour.

A real post-work society, argues Chamberlain, means that membership in one’s community must not be connected to work (paid or unpaid). Rather, he suggests a vision of community that is predicated upon concern for the wellbeing of others but does not then turn around and stigmatize or marginalize community members who do not appear to share similar concerns.

One key part of this is that we should not view individuals as things that can be separated from a community or society (or accordingly marginalized as “non-contributors”). Rather, a community is in its fundamental form made up of interconnected relationships that have little to do with labour.

Chamberlain argues that the tendency to think about this kind of community as encouraging “freeloading” is an intuitive response from those of us who have grown up valuing employment so highly. Accordingly, Chamberlain provides some insightful advice for UBI advocates, suggesting that arguments for UBI should be focused on collective well-being rather than employment potential, shaped in a way that does not encourage critics to jump straight to criticisms about giving “something for nothing.”

Chamberlain’s vision for a post-work society is outlined in terms of what it must not be. The lack of a fuller picture is understandable given the magnitude, impossibility, and perhaps unsuitability of attempting this task theoretically (a challenge he acknowledges). Despite this, the last few pages of the book cite reasons for hope of a transition: the prevalence of conversations about UBI, minimum wage movements, and economic cooperatives, as some examples.

A reader may wonder if none of the smaller communities established within and regardless of political boundaries, including economic or social cooperatives, faith-based communities, secular or intentional communities, families, or Indigenous or ethnicity-based communities, already value interpersonal wellbeing more highly than labour and, accordingly, exhibit unique social economies. While it is sensibly out of the book’s scope to conduct an international comparison of work ideologies, Chamberlain’s focus on national discourse feels relevant and interesting but also general and totalizing, spoken from the “voice” of the work society without exploring the diversity that may be occurring within a nation or testing its borders on local scales. However, overall, Chamberlain’s Undoing Work, Rethinking Community is a considered and valuable critique of the role of employment in life, politics, and UBI policy and discourse. His discussion of increasing precarity, demand for flexibility, and the lack of freedom that employment often delivers despite independence’s promises to the contrary will strike home for many readers.