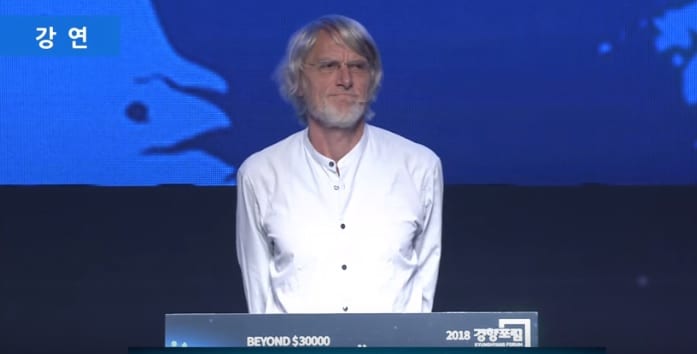 Phillipe Van Parijs was in Seoul, on the 19th of June 2018, presenting a keynote lecture, where Nobel prize economists Joseph Stiglitz and Augus Deaton where present, as well as Peter Hartz, whose name became attached to the Hartz IV reform in Germany. The lecture was entitled “Why Universal Basic Income”, and the event named “The KYUNGHYANG FORUM 2018” with this year’s theme “BEYOND $30000, Striving for a better tomorrow – Beyond inequality”.

There was also a panel discussion between these experts, under the title “A proposal and strategy for sustainable development”. Among the interventions, Augus Deaton made the pertinent point in which basic income experiments are establishing that basic income “doesn’t discourage people from working”, while one of the main arguments defended by Van Parijs (for basic income) is precisely to supply the real freedom of choice (and not work, if that’s the case). One might argue, however, that it is precisely that freedom which allows people to work, expectedly in something meaningful to them.

Van Parijs presentation and panel discussion can be watched through the following links.