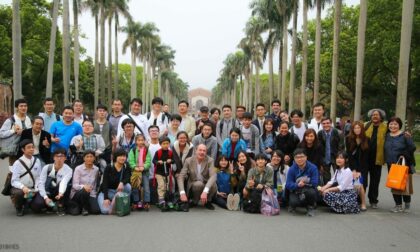 The Basic Income Asia Pacific 2018 conference signaled a feeling of growing momentum of the basic income movement in Asia Pacific, particularly in Taiwan.

Over 100 attendees filled the two day conference in Taipei, along with thousands of viewers of the online livestream and simultaneous translations. The speaker roster this year featured an extensive list of international and Taiwanese scholars and personalities.

Davala said he felt “electricity” during the conference.

“The UBI Asia Pacific Conference is an important milestone in the basic income movement. It is a high voltage moment that we in Asia will talk to our children about. The energy in the conference was amazing, and I was inspired to see young women and men from different universities in Taiwan all fired up about the idea of basic income,” Davala said.

Schmidt said it was clear the Taiwanese group had put in a lot of effort since last year’s conference.

“At this year’s UBI Asia Pacific Conference, it was noticeable that the UBI team had already been working for a full year. Sarath Davala from India gave a rousing speech, and Patrick Havermann from the United Nations Development Program in Asia would like to make the entire UN network available to spread the idea of the Basic Income,” Schmidt said.

Taiwanese media emphasized the conference’s focus on Taiwan’s recent changes to the referendum law, which has opened up the possibility for a basic income referendum in Taiwan.

Taiwan’s Digital Minister Audrey Tang opened the first day of the conference, noting that while she believes more research should be done on basic income in Taiwan, she supported the spirit of discussion at the conference.

“Indeed, to build a sound re-distribution mechanism to improve human welfare and equality — this is a timeless subject that needs continuous review and revisit,” Tang said.

The UN Development Program (UNDP) Asia Pacific Advisor Patrick Haverman, who has been leading an effort to work with regional governments to research basic income, opened the second day of the conference.

Haverman held a series of round-table discussions with Chinese scholars and officials on the possibility for a pilot program in China.

“In my work with UNDP, I have helped establish round-table meetings on basic income across the Asia Pacific with other UN agencies, academics, and government officials to start a discussion about UBI and explore the possibility of piloting an basic income project,” Haverman said. “The Basic Income Asia Pacific conference is good way to exchange information and to discuss how potentially UBI can address some of the most pressing challenges of our time, like inequality and automatization potentially taking over some of the current jobs.”

UBI Taiwan also presented the current state of their research on both days. The research group said their main focus is creating a framework for a universal Partial Basic Income (PBI) that would gradually phase into a full basic income over a decade. The English overview of their research can be found here.

The proposal would increase taxes by five percent of Taiwan’s GDP and could provide 3,000 NTD ($102 USD) to every Taiwanese citizen.

Jiaguan Su, UBI Taiwan’s Research Director, said the scholars who had met with the research team to discuss the national proposal were “impressed,” and that their main takeaway is that the proposal must emphasize the values of UBI.

“The most important lesson we took from the conference is we must promote the core values of UBI Taiwan through the national proposal. Namely, UBI is for everyone, not just a specific group of people. Our research should focus on this value in order to demonstrate UBI’s ability to promote democracy and human rights in Taiwan,” Su said.

Jason Hsu, a KMT (Nationalist Party) legislator in Taiwan’s Legislative Yuan, spoke at the first day of the conference. Taiwan media reported that Hsu is considering raising the subject of basic income with large Taiwanese companies.

James Davis, a Columbia University student and UBI Taiwan Field Research Director, interviewed Andrew Yang, the 2020 US presidential candidate running on a basic income platform for the conference. Yang is ethnically Taiwanese and said he was excited by the discussion of basic income in Taiwan.

“UBI Taiwan is fighting the good fight. I was honored to contribute to the BIAP conference because job automation has the potential to seriously hurt Taiwanese workers – and American workers – if universal basic income doesn’t become a reality soon,” Yang said.

Davis also interviewed Qin Gao for the conference, the Columbia University professor who has written a book on China’s cash transfer program, dibao. Gao is the director of China Center for Social Policy at Columbia. Gao noted the problems and stigmatization that arise from some of the means-testing conditions on China’s cash program.

Andy Stern, the former President of the Service Employees International Union (SEIU) and former advisor to President Barack Obama, has been a consistent advocate of basic income in the United States and has provided advice and support to UBI Taiwan over the last several months.

“The clarity of UBI Taiwan’s vision and the tremendous work of its fellows is astounding. The time for universal basic income policies is now, not later. And the world is lucky to have UBI Taiwan on the vanguard of the global debate, designing UBI policy in practical, politically feasible ways,” Stern said.

National Chengchi University (NCCU) and National Taiwan University were the locations for the event this year. NCCU’s International Master’s Program in Asia Pacific Studies (IMAS) was the main organizer for the event. UBI Taiwan provided the volunteer team.

The U.S. State Department’s Critical Language Scholarship program provided a grant through its Alumni Development Fund to support the event to Prochazka, Elyse Mark, and Davis.

Tyler Prochazka, UBI Taiwan’s co-founder, was the director for the conference along with Dongyan Wu, UBI Taiwan’s Public Relations Director. Prochazka and Wu will appear on Taiwan television in April and May.

Ping Xu, UBI Taiwan’s co-founder, said she was excited by the results of the conference, particularly the connections made between different opinion leaders from around the region and within Taiwan.

“It was great success to have many influential opinion leaders from political, medical and social fields participate in the conference. This was a brand new milestone to help build the UBI movement in Taiwan,” Xu said.

Davala said the conference was a positive sign for the future of Taiwan’s UBI movement.

“UBI Taiwan, within a short period has been able to inspire and mobilize hundreds of students to stand up for an idea that is often dismissed as Utopian and impractical. Taiwan could very well be the first Asian country to go for a referendum on Unconditional Basic Income,” Davala siad.

The livestreams and simultaneous translation broadcasts can be found on UBI Taiwan’s Facebook. For the conference’s Twitter stream, go here.

Leave a comment Asia, Asia Pacific, China, India, Taiwan, UN
The views expressed in this Op-Ed piece are solely those of the author and do not necessarily represent the view of Basic Income News or BIEN. BIEN and Basic Income News do not endorse any particular policy, but Basic Income News welcomes discussion from all points of view in its Op-Ed section.