Basic Income and the ecologic transition 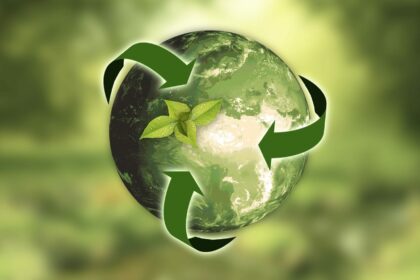 During the last year, I asked myself how the implementation of a Universal Basic Income (UBI) would affect our society and boost or undermine the transition to a sustainable way of living.

We live a complex world where many factors are inter-related and result into visible crises: forced migration, unemployment, violence, hunger and extreme poverty, among others. Pope Francis says we live one single crisis, which is complex and interconnected. The root of this crisis is at the way we behave: competing instead of collaborating and fighting for resources instead of sharing what we have as humankind.

As a result, in the twenty-first century, humankind will have to deal with some new challenges:

These five factors are the primary motivation for a paradigm shift. Each of these challenges must be addressed with specific policy, but we cannot be successful if we do not consider the connections between these factors.

We should transform the economy and prioritize the impacts over society and nature. This is the ecologic transition. This transformation must be deep at many levels, from production, to consumption, but also in our way of thinking. We cannot compete among ourselves and create a world of winners and losers. We cannot allow anyone to be left behind. So many people are losing under this system, which is why we have the highest migration and inequality rates in history.

Climate change threatens the lives of millions of people, and the poor are the most vulnerable to these climate disruptions. Climate change is caused by human activity and linked to our consumption patterns. This is another reason for ecologic transition. Climate change will worsen if we do nothing about it, so it is imperative that we transform the way we consume and produce.

The fourth industrial revolution is changing the structure of the labor market and the way things are done. Artificial intelligence and automation will make thousands of jobs disappear, while also dramatically changing the way the remaining labor is done. The most immediate effect is to cause high unemployment among low-skilled workers and requiring retraining for the rest.

In the last few years, many initiatives have pointed to basic income as an interesting policy to guarantee the wellbeing of citizens. Some areas that have tested the idea include Holland, Finland, Kenya, India, as well as the classic examples of Alaska and Canada. Most of these initiatives come from the state or local governments, but also civil society is starting to experiment with basic income through NGOs such as “Give Directly” in Kenya and UNICEF in India. Some private companies have shown interest too, such as Facebook or Google.

In the basic income experiments, it has been observed that wellbeing is improved. Poverty is reduced, while also producing a lower stress level, better health, more education time for young people, and a 13 percent work time reduction per family unit[1].

I found these effects interesting and well adapted to the 21 century conditions: 13 percent less work time is compatible with a high unemployment rate. Less stress is good news for a highly stressed world, especially in developed economies. Better health is always good news, and probably related to the stress level.

Increasing education time is probably the best side-effect. We start to see how technology is growing more important in our daily work, and many people will need to learn how to use it or even develop new skills. The education sector is creating a renewed process for itself. It is said that most of the high qualification labor in the future will need to adapt to AI, and most university degrees will need to be adapted in the next four years.

Looking at the main effect, which is poverty alleviation, I made a simulation for the Spanish context, 700 euros each month (tax free) and a fixed 49% tax for all labor. 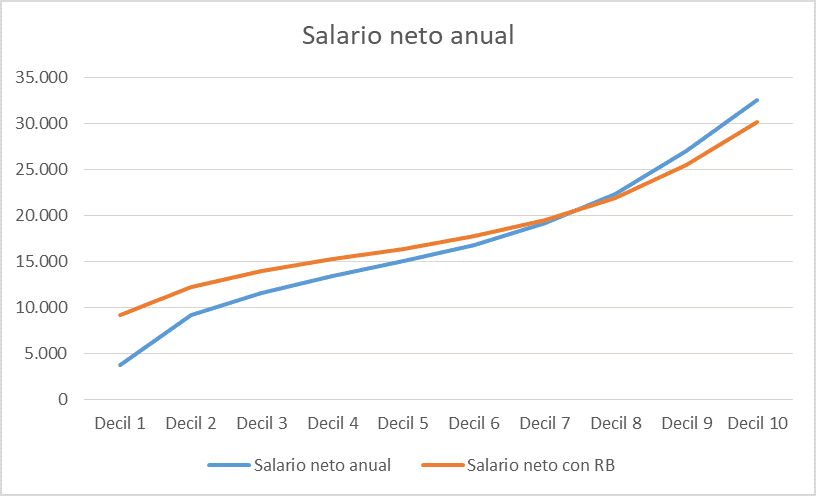 The relative poverty line in Spain is 684 €/month, so if this policy was implemented throughout the country, we can say poverty would be drastically reduced. We must bear in mind that 22.3 % of Spanish population was under this level in 2016[2].

As we see in the figure, the poorest are the most benefitted by this measure, then gradually benefits decrease and the richest 30 percent actually pay into the system. Universal Basic Income was funded from savings in other subsidies (30%) direct taxes (50%) and indirect taxes (20%). Finding resources for it was easy and efficient considering the potential benefits.

But my question remained un-answered: Will the basic income help stimulate an ecological transition? I was quite worried since I consider this transition necessary for a sustainable future. I saw no point in sending money to everyone if we do not change anything more.

I found a few interesting effects synergic with ecological transition, including:

An ecological transition is complex and includes many transformations, but it will not happen if we do not assure our standards of living are beyond the poverty line. We cannot ask a freezing family not to chop the trees to heat and cook if they do not have any other option. Basic Income is precisely about having options. One of the main objections is that many people will misuse these resources. I read last week an article that made the next question: Which is the best way to help a woman with a gambling problem and two kids, basic income or food and house coupons?

This question shows how some people perceive poverty basically blaming the poor. I have some experience working with the poor and they are as smart anybody else. The only difference is they did not have the same options in education, social inclusion or job opportunities. I am not saying basic income will solve poverty immediately, and a lot of social work needs to be done, but at least it will help to achieve some balance and provide a solid ground for a transition towards a more sustainable society.

Martin was born in Madrid in 1976, and he is graduated in biology with a Master in International Aid and Cooperation. He has worked with several aid agencies and now he is Phillipines and Central Asia Desk Officer for Caritas Spain. Apart from development projects and emergency interventions, he has specialized in climate change, working with several civil society networks since 2008. He has coordinated a number of “Documentación Social” dedicated to climate change (2016), and written a book about basic income (2018).

[2] Data: Instituto Nacional de Estadística 2016. If we consider other incicator such as AROPE, which is used in Europe context, 27.9% of the population in Spain is at poverty risk (AROPE, 2016).

2 comments ecology, environment, nature, transition
The views expressed in this Op-Ed piece are solely those of the author and do not necessarily represent the view of Basic Income News or BIEN. BIEN and Basic Income News do not endorse any particular policy, but Basic Income News welcomes discussion from all points of view in its Op-Ed section.