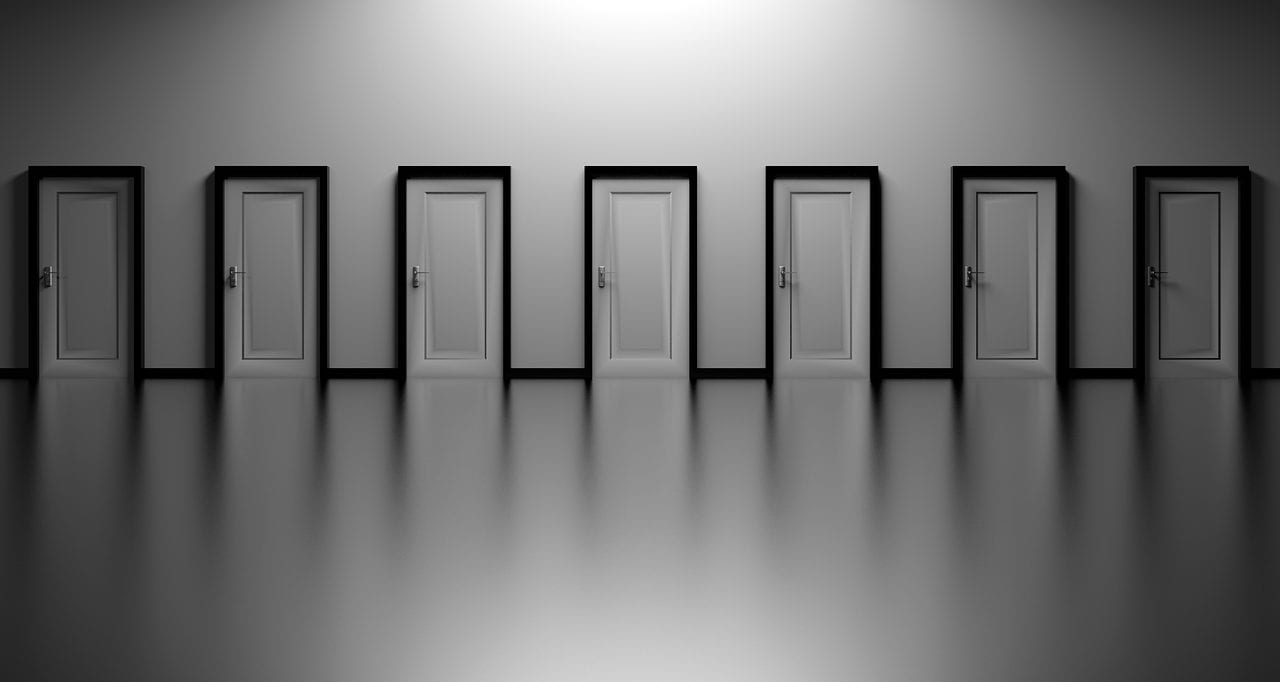 Discussion of alternatives to Citizen’s Basic Income are increasingly debated, so we are here publishing for the first time a paper prepared in 2015 for a consultation organised by some of the UK’s major charities on options for reforming the benefits system.

The descriptions and discussions assume that both the tax unit and the benefit unit are the individual and not the household. The complexities related to household-based options would require additional description and discussion.

( – real ones: not what the Government calls ‘tax credits’)

A credit is allocated to every individual. If someone is earning nothing, the full credit is paid. As earnings rise, the credit is withdrawn. At the point at which the credit is exhausted, Income Tax starts to be paid. (A Tax Credit that is withdrawn as unearned income rises is theoretically a possibility, but the administration would be even more complicated than for the version described here.) 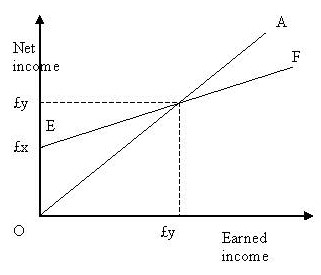 In the diagram, the credit is worth £x per week. As earnings rise, the credit is withdrawn, so net income rises slower than earned income. At earnings of £y per week (the break-even point), the credit has all been withdrawn. Above this point, Income Tax is paid.

The diagram assumes that the rate at which the credit is withdrawn is the same as the tax rate. If the rates are different then the slope of line EF is different above and below earnings of £y per week.

Our current income tax system is cumulative. An annual amount of income is not taxed. Each week, or each month, the employer has to calculate how much tax to deduct so that, by the end of the year, the correct amount of tax has been deducted. With Tax Credits, the tax system would be non-cumulative. Each week, or each month, the correct amount of the Credit would need to be paid in addition to earnings, or no Credit would be paid and earnings would be taxed. A non-cumulative system requires a single tax rate, so anyone paying higher rate tax would need to pay additional Income Tax at the end of the tax year.

A Citizen’s Basic Income is an unconditional income paid to every individual by the Government, and it is not withdrawn as earnings rise. Tax is paid on all or most earned income. 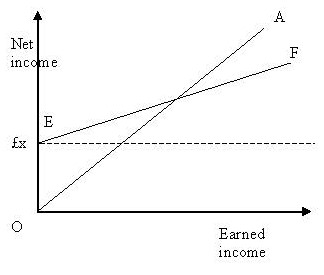 In the diagram, a Citizen’s Basic Income of £x per week is paid to everyone. All earnings are taxed. The line EF shows the net income.

(The diagram assumes that a single tax rate is charged on all earnings.)

The Government pays a Citizen’s Basic Income to every individual, the amount depending only on the person’s age ( – larger amounts could be paid to older people as a Citizen’s Pension, and lower amounts to children and young people). Employers would continue to administer Income Tax via PAYE as they do now.

(A variant is a Participation Income. This would require fulfilment of a ‘participation condition’ before receiving it. The graph would be the same as for Citizen’s Basic Income, but only for those receiving it. The participation conditions would need to be specified and each individual’s fulfilment of them would have to be monitored. This would result in considerable administrative complexity, and would also mean that many of a Participation Income’s effects would be closer to those of means-tested benefits than to those of a Citizen’s Basic Income.)

Negative Income Tax, Tax Credits, and Citizen’s Basic Income, all generate the same net income diagram, so all three schemes would reduce marginal deduction rates (the total rate of withdrawal of additional income), would incentivize employment, and would enable families to more easily to earn their way out of poverty.

The differences between the schemes are administrative.

(For more detailed discussion of all of these options see Malcolm Torry, The Feasibility of Citizen’s Income (Palgrave Macmillan, 2016), pp. 214-230.)