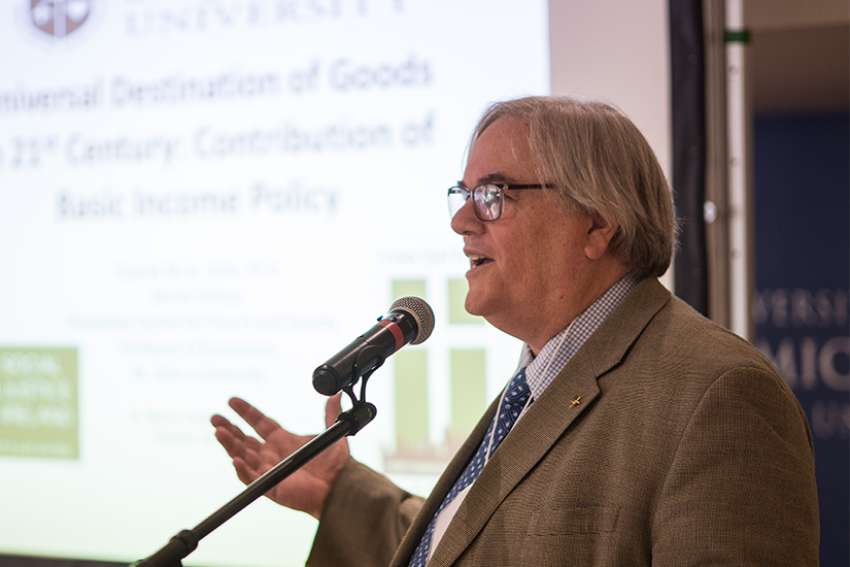 This talk takes place during a period when a UBI pilot program is running in Lindsay, Thunder Bay and Hamilton, in Ontario, targeting those who qualify as low income.

Primarily, catholic social teaching focuses on human good and UBI aims to promote human well being so, although not directly a part of its teachings, UBI successfully puts in place a framework for catholic practice, said Marquette University’s Jesuit Theologian Fr. Joseph Ogbonnaya.

In Clark’s view there isn’t a Catholic economic policy, but he notes that in light of the Catholic social teaching, which advocates for equality it is sensible for any Catholic, to put forth policies that lead to less poverty and greater social mobility and inclusion, such as UBI. Still, UBI is not a panacea, meaning that we need public goods and the state for public education, public health, for welfare, he said.

Since we live in a society where we obtain what we need through markets, Clark states that we must ensure everyone has sufficient income, at a minimum level, to participate in it and have a decent living.

According to Clark, there is an increasingly unequal distribution of wealth, a result of wages that stall in the face of productivity growth. This is important since for a democracy to work there must be mobility, which in turn depends on equality being ensured, something that society needs to work on, said Clark.

Comments on UBI coming from the Catholic Church have been rare, so in this regard, public appearances as such from a Vatican related figure are refreshing.