The 17th BIEN Congress took place in Lisbon, Portugal from the 25th to the 27th of September. The focus of the congress was on “Implementing Basic Income.” The 150 presenters represented 33 countries, with more countries represented in the additional 380 audience members. According to Karl Widerquist, Vice-Chair of BIEN, this may have been the largest BIEN Congress since Brazil in 2010.  The Congress included keynote presentations by BIEN co-founders Guy Standing and Philippe Van Parijs, in addition to keynote presentations about several Basic Income pilot programs, reflecting the congress’s focus on implementation, and from several political figures who are advocating for Basic Income in their respective countries. 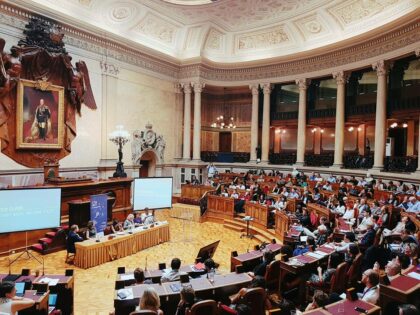 The first day of the congress took place at the Portuguese Parliament (Assembleia da República), and as Standing said: “I am sure I speak for many of the co-founders, and many of them are here, that when we set up BIEN 31 years ago we never anticipated that we would be in a place like this in 2017.” The second and third days were held at ISEG, Lisbon School of Economics and Management, a beautiful venue that used to be a convent (Convento das Inglesinhas, restored by architect Gonçalo Byrne) that has kept many of its original architectural features and now hosts the university’s post-graduate programs. 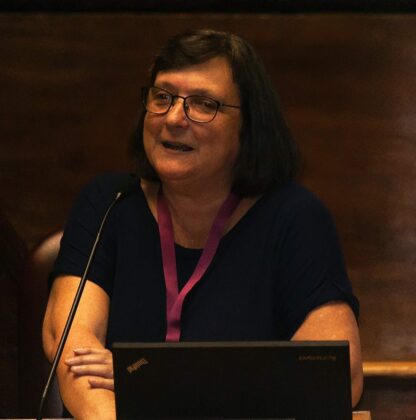 Starting the keynote session on Basic Income pilot programs, Evelyn Forget’s presentation was about the differences between the narratives attached to several Basic Income experiments. She underlined that different narratives will create different criteria of success. For example, Finland’s narrative is about long-term unemployment and incentivising return to work. In this case, the experiment will be successful if people return to work. Ontario’s narrative is about social justice and a gap in benefits for adults because of the new reality of precarious work and poverty issues. Their goal is to expand the welfare state. Silicon Valley’s Y Combinator’s narrative started out as an utopia put forward by private individuals who wondered what would happen once automation freed people to do what they want. Forget stressed that “context matters” in pilot programs, and she suggested that when we bring together all these shared experiences, we can create newer and richer narratives.

After Forget’s insights, there were several presentations about specific pilot programs being developed. Karen Glass, from the experiment in Ontario, Canada, described the pilot program as a type of Negative Income Tax program, since the payments decrease as the recipients start working. The Ontario project applies to households and encompasses individuals aged 18 through 64, who have been residents of the region for one year. The pilot provides a guaranteed annual income of $17,000 dollars per individual and $24,000 per couple, which is 75% of the low income measure. The success criteria are not focused primarily on work incentives, but on recipients’ improved health, reduction in anxiety and the ability to make ends meet. Elizabeth Rhodes from Y Combinator, a seed investment company, talked about the contours of what this private experiment wants to achieve. Y Combinator has already financed a feasibility study in Oakland. and now plans to select 3000 participants who will receive 1000 dollars per month, some for three years and others for five. There is an income cap in the selection and they will be undersampling higher incomes. Presently the program is considering selecting subjects  21 to 40 years in age. The pilot intends to evaluate well being, mental and physical health, social and civic engagement and social networks effects as well as effects in the children of the participants. The research team has been piloting and testing their methods with a smaller group of participants. 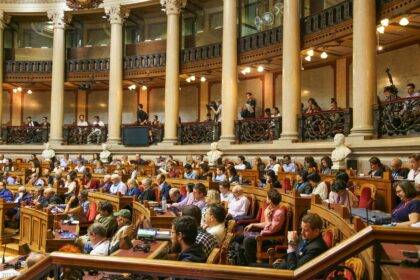 Joe Huston spoke about the experience of GiveDirectly in Kenya. GiveDirectly has raised funds privately and has been distributing them to around 100 people, but once the project is fully launched there will be up to 26,000 people receiving some type of cash transfer. The pilot is divided into three groups, one group will receive a monthly payment for 12 years, another for 2 years and yet another will receive a one time cash grant of the same amount. The 100 people who are receiving a monthly Basic Income already have reported on their experiences, and, as Huston says,many have reported they did not reduce their work efforts; instead, many have several projects that need to be completed (such as paying for school and building a house), so they need to work. Others have pulled their Basic Income payments together in something called “table banking” and give a larger sum to each member at a time so that more can be achieved. Giving to individuals as opposed to households has had the emancipatory effects that are often theorized: because each person receives an equal amount of money, it is easier to solve household disputes. Regarding how the money is spent,  Huston says that Basic Income debates seem to oscillate between saying that people will become lazy bums or startup engineers; however, both extremes are inaccurate and do not apply to what is happening in the village so far. Huston explains that when walking from house to house in Kenya one can see a diversity of life choices: “Irene spent some in purchasing a goat for about $12 and kept some of the money as savings. Eric spent most of his money in a fishing net, saved some of the money and bought small fish like anchovies for a snack. Frederick spent most of the money in school fees.” So far, each person used the money as is more adequate in their particular circumstances. 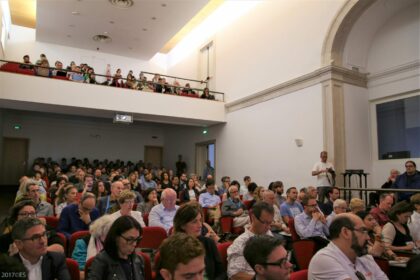 On the political arena there were several important participants. From Germany, Cosima Kern spoke about the new Basic Income single issue party, and explained that since Germany has no direct democracy (in contrast to Switzerland) this is a way to force Basic Income into the political arena. The Basic Income party had almost 100,000 votes in the election that took place on day before the Congress, which Kern said is a good result for a new party. Enno Schmidt talked about the referendum in Switzerland and also underlined that the 23% vote for Basic Income was a great first result, reminding everyone how it took 17 years of discussion in Switzerland for women to have the right to vote. Lena Stark spoke about the new political party in Sweden in the same vein as the German party; they plan to run for elections in September 2018. Ping Xu presented the situation in Taiwan with the help of Tyler Prochazka. Taiwan has the highest housing costs and the lowest birth rates, and would be an ideal site for a full implementation of Basic Income. From Japan, the ex-Minister of Agriculture, Masahiko Yamada, spoke about the importance of Basic Income in his country, which is facing new economic challenges that urgently need to be addressed. 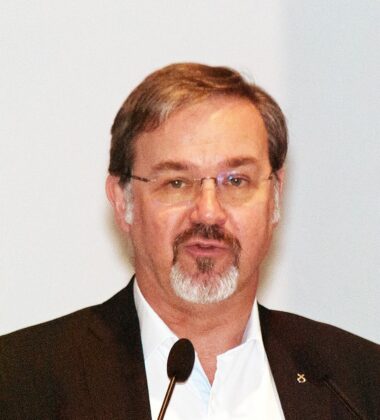 Finally, the Scottish MP Ronnie Cowan inspired the audience with his privileged viewpoint regarding how politicians tend to operate and the heartfelt way that Scotland is pursuing their Basic Income pilot programs. Mr. Cowan said that politicians rely on experts, but experts and academic often disagree, and politicians need facts and figures, which is why experiments are so important. With pilot schemes, we can monitor outcomes; they can be used to tell if “people are happier, more socially engaged, eating healthier, if kids are doing better at school, we can measure the benefits against the cost.” Mr. Cowan concluded:  “Basic Income really comes alive for me when we consider it’s for everyone. It is not means tested. It is not subject to the disability test. It removes stigma. It creates choice and it’s absolutely dripping in humanity.” 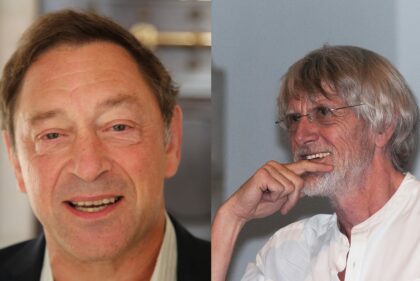 The two main keynote speakers, Guy Standing and Philippe Van Parijs, also captured the audience’s interest with their presentations. Standing celebrated the 800 year anniversary of The Charter of the Forest, a piece of legislation that was valid for 754 years, only repealed in 1971. Standing argued that the commons defended in The Charter of The Forest have been plundered upon for hundreds of years, and Basic Income is a way to bring back the commons. He defended the position that Basic Income should be seen as a social dividend based in the commons and land tax, not something that will send income tax through the roof. Van Parijs spoke of the right to work and the duty to work. He argued that even though many see Basic Income as an attack on these, it actually facilitates both. Basic Income can organically encourage part-time work and therefore job sharing, thus promoting the right to work. Basic Income can also allow for the duty to work to be expressed in a meaningful way that includes paid and unpaid jobs. According to Van Parijs, the duty to work cannot mean simply doing something for a salary; it should be viewed more widely as a duty to participate in society in a meaningful way. Basic Income can liberate people to participate in such a way by either allowing them to chose paid work that is more meaningful, or by choosing other unpaid useful work. If we eliminate the idea that people have to work in whatever they can to survive, the morality of what one chooses to do will come to the forefront, allowing the duty to work in a more meaningful way to become center stage as far as human activity is concerned.

The keynote presentations wrapped up with Eduardo Suplicy from Brazil, ex-Senator and long time defender of Basic Income, and Francisco Louçã, member of the left wing party Bloco de Esquerda in Portugal. There were also many other local Portuguese participants, as well as a slew of media attention related to the congress (which will be discussed in a future Basic Income Newspiece). The congress also included 37 parallel sessions, among others, Malcolm Torry’s presentation on Defining Basic Income, sessions on Degrowth, Digital Economy, Communicating about Basic Income, and many other topics, as well as two films, Christian Todd’s Free Lunch Society and Rena Masuyama’s Film Project, the first fiction film about Basic Income produced in Japan. Summaries of all the sessions provided by the chairs should be available in about one month at the Portuguese Basic Income Site, for now there are papers and presentations and videos of the event available of the site.

See the program and available Papers and Abstracts for the 17th BIEN Congress here.

See Videos of all the plenary sessions here.