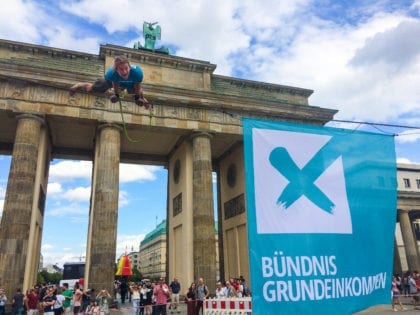 The Bündnis Grundeinkommen, Germany’s political party campaigning on the single issue of introducing a basic income in the country, has held an open air event in preparation to participate in their first national election.

Hosted together with Kulturimpuls Grundeinkommen eV (a German broadcaster), the event took place on July 29th at the Brandenburg Gate, Berlin. There was a celebratory tone to the day with music provided by Kiezkneipenorchester, Juri di Marco and Bertram Burkert, and entertainment in the form of slacklining, by world record slackliner Alexander Schulz. Guest speakers included: Prof. Dr. Sascha Liebermann, Head of Education and Social Change in The Department of Education at Alanus College in Germany, Dr. Liebermann was one of the first advocates of UBI in Germany and adopted the campaign slogan “freedom instead of full employment”; Martin Bohmeyer, a 29 year-old web-developer, who self-imposed a basic-income in his own personal trial in 2014 and is now running an initiative called Mein Grundeinkommen in order to crowd-source for other individuals; Ralph Boes, a sit-in protester in central Berlin, who campaigns and argues for a guaranteed “livable income”; Prof. Dr. Bernhard Neumärker, Director for The Department of Economic Policy and Order Theory at The University of Freiburg; Enno Schmidt, who, in 2006 with entrepreneur Daniel Häni founded the Swiss Basic Income Initiative (Initiative Grundeinkommen) in Basel, which, in 2013 submitted 126,000 signatures in favour of the introducing of an unconditional basic income, leading to the UBI referendum in June of 2016; and Susanne Weist, the first chairman of the Bündnis Grundeinkommen, who received attention in 2009 due to her petition to the German Bundestag to introduce a basic income.

The press team at Bündnis Grundeinkommen said that “humans need security to thrive” and that “basic income is a secure economic base” which would allow humans to live in a new way, “pursu[ing] the lives they want to live”. The BGE:Open Berlin event was described as “a visual impression of this concept”, with Alexander Schultz’s slacklining performance embodying the concept of “basic income as a permanent earnings floor no one could fall beneath, offering security and personal freedom”.

Talking about the possibility of a UBI being introduced to Germany, Susanne Wiest, chair of Bündnis Grundeinkommen, said: “Basic Income may not only be about social security, but also about a better work-life balance and higher [level of] happiness. The days of people being exploited by the market wage would end. If people only work in jobs they enjoy, they would be more passionate about their work. No one would be excluded from society because they can’t find a job”.

Cosima Kern, vice chair of Bündnis Grundeinkommen, added: “Maybe the most important change would be a feeling of a shared prosperity, that we are all together in this”.

Commenting on the day itself, the speeches and the entertainment, Enno Schmidt stated that it was “amazing to see this UBI performance directly in front of the Brandenburger Tor, the symbol of the capital of Germany”. Regarding the meteoric rise of the party and of its origins, Mr Schmidt described how the co-founder of Bündnis Grundeinkommen Ronald Trzoska conceived of a party for basic income “on the day of the popular vote about the introduction of an UBI in Switzerland”. Although Germany does not have “the right of a people’s initiative, like the Swiss have”, Mr. Trzoska envisioned that a party could be formed within the MMP system at the German Bundestag, and campaign for the single issue of a UBI.

Mr. Schmidt stressed that the purpose of the Bündnis Grundeinkommen is “short and clear: unconditional basic income is electable”. It is a tool that means that “the people can do something for their ideal”. He did warn that “many make the mistake of mixing other issues with unconditional basic income and disguising the idea”, rather than focusing on it being an unassailable right, or, as he puts it: “[an] idea [that] is the human being”. There is often, also, too much focus, he says, on the concept of political parties, which are divisive and compartmentalizing. The time for political parties, as he sees it, is over. The “post-party party” of the single issue, such as the Bündnis Grundeinkommen, is more of a democratizing “social movement”, allowing direct participation and ensuring that the “trap” of waiting is avoided and that there is no temptation to “submissive[ly] attempt to participate in old sick forms”. “The party”, he summarized , “is a signal, it is an art form, it is a life platform and allows life for the unconditional basic income”.

On September 9th and 10th, German UBI activists met in Göttingen at BGE:open to discuss the political progress of UBI in Germany and worldwide. The elections the Bündnis Grundeinkommen participate in will take place on September 24th, 2017.

Homepage, ‘BGE: open 17.5 in Göttingen from 9 to 10 September’, Bündnis Grundeinkommen.De

One comment Bündnis Grundeinkommen, Germany
The views expressed in this Op-Ed piece are solely those of the author and do not necessarily represent the view of Basic Income News or BIEN. BIEN and Basic Income News do not endorse any particular policy, but Basic Income News welcomes discussion from all points of view in its Op-Ed section.