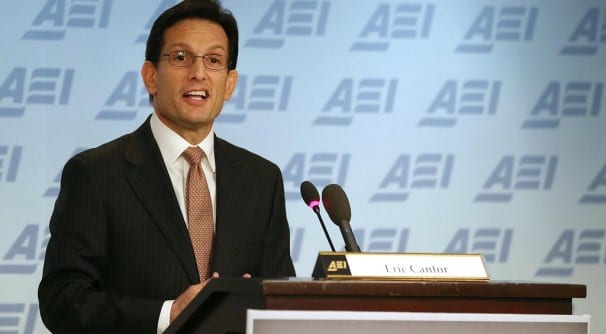 The American Enterprise Institute, a conservative think tank, released a piece of research in late May, which was an attempt to analyze the effect of the implementation of a universal basic income (UBI) on the current American social welfare system.

The proposal has been released as a working paper, meaning in this case a preliminary research paper with incomplete considerations, but a base model nonetheless to move forward with and make improvements.

The paper’s proposal is a budget-neutral form of a UBI, meaning instead of implementing a basic income in addition to the existing American social welfare system; most existing programs like Medicaid, Veteran’s Benefits, and Social Security for the elderly over 65 are repealed and replaced with a UBI. Using data from the Federal government’s budget outlays from 2014, the paper finds that the repeal of large programs in America would yield about $2.54 trillion dollars. In addition to this, the proposal repeals 23 different tax benefits like the Student Loan interest deduction and Earned Income Tax credit, bringing in more revenue and freeing up a grand total of about $3.21 trillion for a UBI.

Using Federal government tax data, the paper analysis the net benefit gain or loss by tax bracket and age. Using the parameters described, the findings show that some of the most adversely affected by this system are in the lowest tax bracket ($0-$10,000). This is unsurprising, because many of the programs this proposal had repealed to finance the basic income are concentrated on this tax bracket.

Another group adversely affected by this proposal are individuals 65 and older, also because their benefits, such as Social Security, have been repealed and distributed among the rest of the population. When excluding age groups of 65 and older, however, nearly all tax brackets see a net benefit in this proposal, with the brackets seeing the greatest benefits being those in the middle.

Essentially, this section attempts to use welfare multiples to assess the gains in efficiency made in eliminating government waste by allowing people to spend the money how they see fit, or giving them a cash payment as they would have with a basic income.

Review of the Findings

The important findings in this proposal from the American Enterprise Institute show that, if a UBI were to merely replace the existing social welfare system in the United States, by repealing existing welfare programs and tax benefits, there would be an overall redistributive impact from the old to the young, and from the poor to the middle class; though there would be a gain in efficiency overall.

Again, this is not a surprising finding as the goal of redistributive programs in America is to allocate taxpayer dollars mainly to the poor and the elderly. Some programs allocate funds too stringently, as the welfare multiples try to demonstrate, and sometimes it may be better for a welfare recipient to merely receive a cash payment. While in this proposal of a UBI the overall efficiency is increased, it does not compensate for the net loss in benefits to the poor and the elderly.

It is worth noting that the American Enterprise Institute espouses classical liberal values of entrepreneurship and free enterprise, as expressed on their website. One of their main interests in exploring a UBI, therefore, is to eliminate government waste, but this may also mean increasing the freedom of welfare recipients to make financial decisions that make sense to them.

One area the paper could do better in is to explain with detail how the repeal of tax provisions increased tax liabilities for different brackets and age groups. In their base model, to help finance the UBI, the paper repealed several tax provisions, which brought the average tax liability for the second tax bracket ($10,000-$20,000) to around $6,714, or on average 45% of their income. The average increase in tax liability for the tax bracket of $200 thousand to $1 million, on the other hand, is $28,425, or on average 4% of their income. The increase in tax liability that helps finance this proposal, therefore, is falling mainly on the lower tax brackets and individuals over 65.

In future research, proposals like this could examine the current tax code with more detail, and how it could be restructured to help finance a UBI. Because most of the new tax burden in this proposal seems to be falling on the lowest tax brackets and the elderly, there should be a conversation about who needs to be bearing the new tax burden, and how much that should be.

Notably, the paper admits that it does not take into account behavioral changes that would take place with the implementation of UBI. Proposals like this could potentially include insights from other basic income projects like the Mincome experiment in Canada, which revealed increases in high school graduation rates, and a drop of health care costs.

It is fair to be wary of the intentions of the AEI in releasing this working paper, but clearly a fair amount of effort was put into it, and it appears to be an honest inquiry into the subject. Finally, it is worth saying that the proposal is only a particular vision of a basic income, one that may not agree with many other visions, but research such as this may nonetheless come across some useful insights.