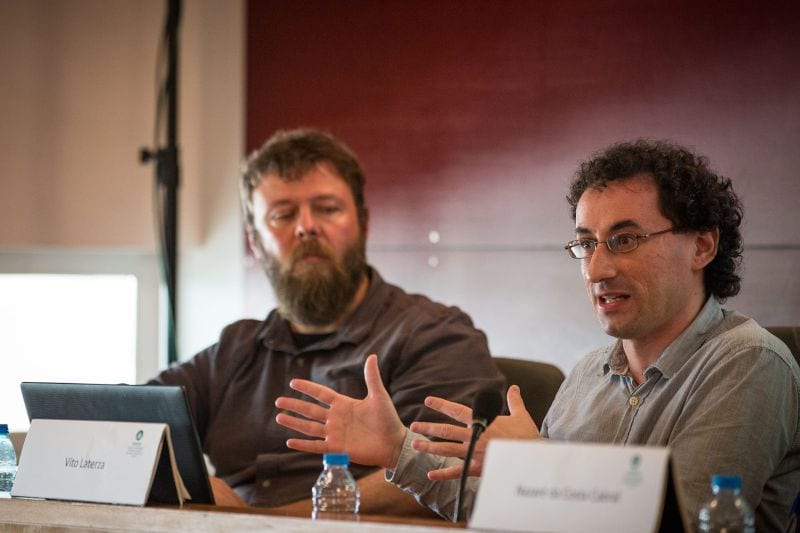 An event focused on the discussion about social policy in Portugal, and particularly about basic income (in Portugal mostly called unconditional basic income), took place at the Lisbon School of Law (University of Lisbon) on the past day 15th of May 2017.

The first part of the event featured Pierre Guibentif and Paulo Pedroso, both professors at ISCTE, University Institute of Lisbon. The former spoke favorably about basic income in a general sense, while the latter was clearly against it. Guibentif defended it was important to compare basic income to other forms of (conditional) income support, although he did not suggest the setup of an experimental pilot to test it. He, although highlighting basic income’s originality over other social policies, defended that it doesn’t per se defend social inclusion. He went on to say that its originality stems from an intent to generate social evolution, contrasting with minimum income schemes, that aim at alleviating most pressing inequalities but not to change the capitalist mode at its core. In his final remarks, Guibentif doubted basic income’s power to emancipate people, who may lack the capacity and/or knowledge to really pursue virtuous life paths. For that he suggested that the State should maintain and even strengthen specific programs to support citizen’s continuous learning in core areas as science, the arts and other humanities.

On the other hand, Paulo Pedroso questioned the relevance of basic income from the onset. Although he concedes that basic income is intended to be a correction of inequalities at birth (structural inequalitites), he remains skeptic about the capacity of the poorest segment of the population to structure their own lives and make a meaningful contribution to society. According to him, basic income will just keep them (the poor) marginalized and unfulfilled. Pedroso firmly stands that work is fundamental for a healthy society, and so basic income will just erase work’s importance as an identity driving force. Supporting a view of full employment, he views work as essentially related to paid employment, more commonly held as jobs. In an increasingly emotional exposition, Pedroso affirms that basic income is sure to be a vehicle for the destruction of the welfare state as we know it, in a reference to common right-wing views on the applications of basic income. He concludes stating that basic income “amounts to suicide”.

The presentation panel also included Olli Kangas, PhD and responsible for the basic income pilot project being run in Finland at the moment, while working for Kela, the social insurance institution of Finland. He essentially presented and justified the pilot project, which aims at avoiding social traps of several kinds – mainly bureaucratic, poverty and unemployment traps. He referred to some internal challenges, for instance unions in Finland, which are categorically against basic income in fear of losing affiliates in the near future. These unions congregate around 70% of the work force in Finland. Kangas explained that the value used in the experiment (560 €/month) was set in order to match the average amount recipients were already receiving from Kela. He also said that, other than employment, this first experiment would also measure the use of prescriptions, medical treatment and income registration. This would be done without interviews or questionnaires, in order not to influence the experiment’s output. To conclude, Olli Kangas announced that Kela was already planning a larger, more profound experiment in Finland. This time it would be national in range, with a larger sample taken from all people on low incomes and experimenting with more tax models. 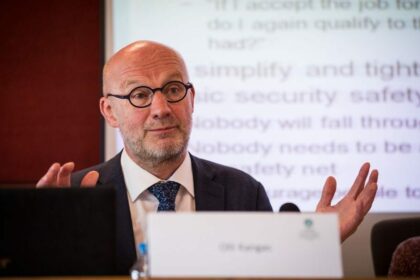 Vito Laterza was also a panelist, and enthusiastically defended the basic income concept, while clearly highlighting some of its challenges. He approached the issue in a “back-to-basics” fashion, recalling the “original idea” of basic income: to liberate people. Laterza went on to describe the present-day labor market as “very segmented” and in which several lines of separation are drawn – sexual, racial, disability, etc. To counteract that unfair and segmented labor market he spoke of “cooperative security”, which intends to build on the welfare state in a non-discriminatory way. He also alerted that basic income must not be seen as “just cash”. That monetization of life tendency is, according to him, extremely dangerous, and so the implementation of basic income must be guided by a freedom-for-all mindset, without destroying the beneficial aspects of the welfare state.

To close this event’s first part, Jurgen De Wispelaere spoke about the necessity of basic income being part of a landscape of policies, most of them already in place within the context of the welfare state. According to him, a policy like basic income can be a generator of other policies, and he made a case for a possible integration between “active” and “passive” social measures. Typically, “active” policies like social investment try to prepare people for the marketplace (where commodification occurs), and “passive” ones like basic income are about de-commodification. Jurgen considers that these policies may be complementary, rather than opposites. He defends that basic income can also be an activation tool, helping in removing social traps – unemployment, bureaucratic and poverty traps – so liberating citizens to pursue education and/or other qualifications. In the same vein, basic income can also provide better conditions for young age learning, which will further the potential for a productive adulthood. He goes on to sustain that basic income also “activates” people to move from “crappy jobs” to better, more meaningful activities. As a final remark, Jurgen’s activation argument also involves gender equality issues, assuring that a basic income can particularly help women to get activated.

Roberto Merrill and Sara Bizarro, also present, shortly listed their version of the advantages and disadvantages of introducing a basic income, opening the session for questions and answers with the audience. The debate that followed revolved around the usual arguments against basic income: disincentives to work, difficulty in financing and the capture of the idea by the far-right. 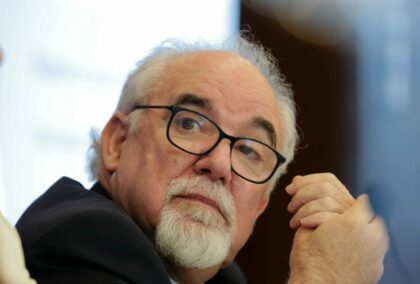 Apart from known defenders of basic income in Portugal, as André Barata and Renato do Carmo, all others showed reserves, in several degrees. Among these there was an overall sentiment that it may still be better to improve on existing conditional social assistance, than to risk a free-from-obligation cash transfer program and end up with a largely idle population. Basic income implementation at the European level was referred several times, in what could be a signal of reluctance in spearheading the concept, leaving that responsibility to supranational entities like the European Community. That is also the opinion of the minister Vieira da Silva, who is concerned about how to communicate the basic income concept to the population at large, and about the risk of creating a cleavage in society between those who work (have jobs) and those who do not (do not have jobs). He has also expressed his belief that there will be no shortage of work (intended as jobs) due to technological innovation, referring to past “revolutions”. However, Vieira da Silva has agreed, along with others, that a wider, more profound discussion about work is necessary in our society.

André Barata summed up the feelings in the air with the following sentence: “There were many reticent speeches, but I haven’t seen any downright opposition”.

Event information at the Lisbon School of Law website