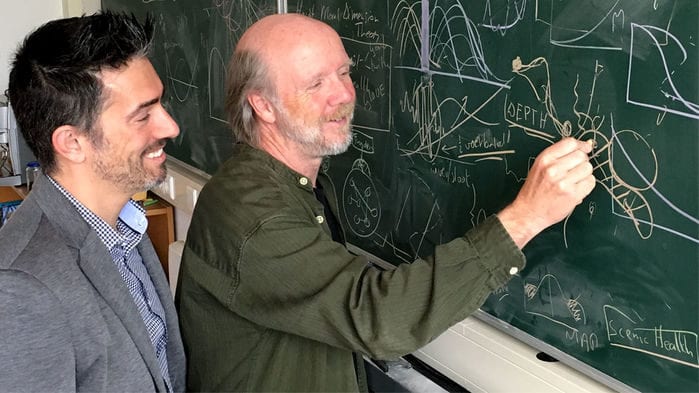 Back in 2014, Johan Bollen and four other colleagues published an EMBO report, presenting a new and radical approach to scientific funding. Since then, Johan has paired with Marten Scheffer so as to develop and communicate further the notion of SOFA – Self Organized Fund Allocation. Scheffer has recently led the Dutch parliament to ask the Netherlands Organization for Scientific Research (NWO) to start a SOFA test pilot.

But what is a SOFA? It is a new way to allocate funds for scientific research. The traditional approach usually means a funding agency receiving many applications, which entail a time-consuming process in itself. Plus, it costs a large percentage of the funding amount to run and manage this top-down driven system. According to a recent article on the issue, by Jop de Vrize, that percentage can be as high as 25%. On top of that, it has been proven highly inefficient, since the success rate of these application is usually below 20% (19.1% in 2016 according to the US National Institutes of Health, and 11.3% at the European Research Council Starting Grants for the same year). The result is that some scientists get lots of money, while a lot of others get a fraction of that money, or even nothing.

The new SOFA funding scheme is, at its core, a distributed, self-allocating system. The funding agency still attributes a certain amount of money to a research community, but then, instead of going through a cumbersome, time-consuming, unfair and inefficient process of distribution, the idea is to get the researchers themselves to allocate funds to other researchers. Specifically, the SOFA system would attribute an equal, unconditional amount of money to each researcher – a certain earmarked value by the agency, divided by all researchers in the community – and then each one would donate 50% of their present and past funding [1] to other scientists, trusting their best judgment. 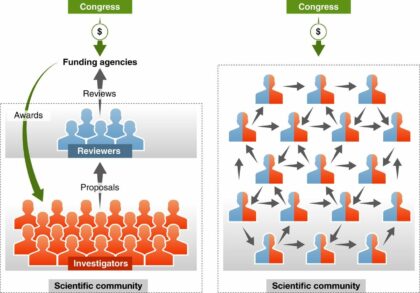 Of course, this new system is not devoid of problems, or potential challenges. Freed to allocate 50% of their research income to other scientists, researchers could choose to give money only to their friends, collaborators or mentors. Also, the problem of the money not reaching those who are needing it the most may still arise, only partially offset by the unconditional amount that will be equally distributed (50% of each year’s grant). However, Bollen and Scheffer are confident, after running many simulations, that “rather than converging on a stationary distribution, the system will dynamically adjust funding levels to where they are most needed as scientists assess and re-assess each other’s merits”. They also agree that the system would have to be include programmed features to avoid self-attribution and hide funding decisions (to keep decisions unbiased), for instance. An important feature of the SOFA system is that no one individual researcher has access to enough information so as to try and influence the attribution mechanism (contrary to the present system, which is more easily politically malleable).

The unconditionality associated with the SOFA scheme, plus its widely-distributed nature draws some similarities with the basic income concept. Basic income, as defined at the Basic Income Earth Network (BIEN), rests on the independence of income and work-status, or even willingness to work. Granted, the SOFA scheme implies that the money is distributed among scientists, devoted and committed to scientific work, with clear and established study plans. However, it is also clear that some of the previous conditions associated with funding decisions – mainly a discussable notion of merit coming from a very small group of peer-reviewers who end up allocating the grants – will collapse if SOFA is introduced. Another similarity with basic income proposals has to do with de-complexification of the attribution system, also reducing its overhead costs, as a function of both distributing 50% of the grants unconditionally and putting in the hands of the researchers themselves the responsibility of distributing the other half of each grant. In the basic income arena, that advantage usually takes the form of reduced costs with social security management, and lowering complexity through existing program’s extinction and remodeling. A third similarity has to do with trust. Unlike the present system, SOFA inherently trusts researchers to allocate 50% of their grants to others. This trust is also present in most basic income proposals, which allow recipients to spend their basic income as they see fit, hence furthering their personal freedom and capacity to more efficiently solve problems in their own lives.

The SOFA scheme has been presented to Eppo Bruins, a member of the Dutch House of Representatives, who proposed a call for a SOFA test pilot in June 2016, which was approved by the parliament. However, the NWO, the agency which would start and manage the experiment, has resisted the initiative. According to Scheffer, that is understandable, since “if applied universally, the novel system would make the agency redundant”.

[1] – Management of past funding options is still not included in the proposed model, but is considered important by the authors, to better use of unused funds.

Jop de Vrize, “With this new system, scientists never have to write a grant application again”, Science (American Association for the Advancement of Science), April 16th 2017