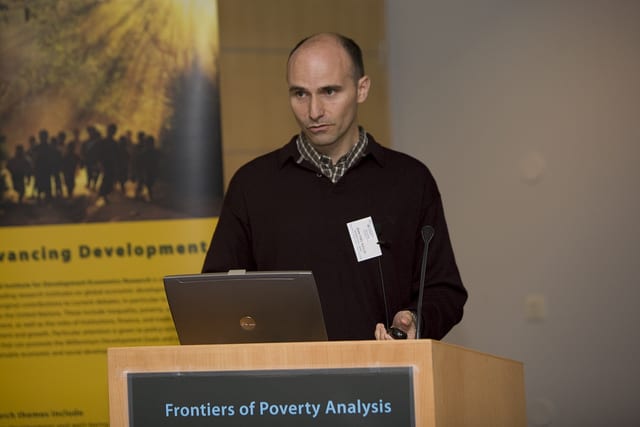 If you follow this site, you may remember a piece on my meeting with François Blais, Quebec minister of Employment and Social Solidarity, who, over 15 years ago—when he was an academic—wrote a well-regarded book on Basic Income. Minister Blais has been tasked by his boss Philippe Couillard, the Premier of Quebec, to explore options for its implementation.

On January 16, his federal counterpart, Jean-Yves Duclos, the minister of Families, Children and Social Development for Canada, sat down for an hour with some 30 McGill students to answer questions.

Unlike Blais, Duclos does not have a mandate from Prime Minister Justin Trudeau to develop a plan for Basic Income. He is currently focusing on a National Housing strategy, a poverty reduction strategy and the issue of homelessness.

Although the discussion covered many topics, the common thread in Duclos’ responses was the eternal Canadian question of which is a federal and which is a provincial responsibility. I was not alone in asking some pointed questions about Basic Income. The underlying theme of his answers was also constitutional in nature [1].

When I asked the Minister what his thoughts were on Basic Income, he had only positive assessments:

He felt it would avoid poverty traps and that there is less stigma attached to it than social assistance. He also feels it is administratively simpler for both governments and the public, since Canada already has two Basic Incomes – one for children (the Canada Child Benefit), and one for seniors (the Canada Pension Plan). Expanding on the first, the minister explained that the entire pre-existing system was under federal control. Fifteen years ago, the support for children on welfare was taken over by the federal government and separated from the support for adults on welfare, which remained a provincial responsibility. The federal government, therefore, had all the necessary tools to implement the Canada Child Credit in July 2016. Provincial programs vary widely across the country. If an individual province wants to implement Basic Income in its area of jurisdiction, nothing can stop it. For the federal government to implement a national program would be far more difficult. “It would be a challenge, a problem of a different order of magnitude,” he said.

However, the federal government has a powerful tool to achieve national standards while respecting provincial competence: money. Today, Canadians enjoy the same level of health care no matter where they live because the provinces agreed to common standards of comprehensiveness, universality, portability, public administration, and accessibility, in exchange for cash transfers.

With regard to housing, the Minister had this to say:

In a federation, a natural and, in most cases, a productive tension exists between the different levels of government. In Canada, in some areas, the tension is avoided by claiming that one area is under some jurisdiction, completely. For housing, this not the case. Housing is shared. Provinces in these situations say: “Why don’t you transfer us the money and we, being closer to our citizens, should know better what to do with those resources.” However, then you lose accountability for these federal tax dollars and it is difficult to have a national, shared vision across all Canadians wherever they live. So the trade-off is between full control to provinces and territories versus a national sense of identity and a common set of values. So the tension is always there and when it’s properly managed, the outcome is always good.

The takeaway is quite clear. Clues to the process of implementing Basic Income are to be gleaned from the history of health care introduction. In that case, successful provincial programs in Western Canada evolved into the national system.

[1] Articles 91 and 92 of the Constitution Act, 1867 lay out distinct responsibilities of the Federal and Provincial governments. Other articles spell out shared responsibilities. Although the division of powers for poverty is not clearly delineated, in part because of the complexity of the issue, the federal government has successfully imposed national standards in shared domains such as Health Care.

Questions like these are less prominent in the United States because of the interpretation of the Fourteenth Amendment.