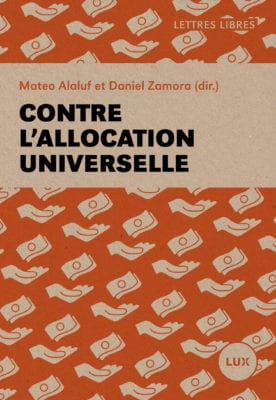 This is a book written by and for French intellectuals. Hegelian and Marxist notions are bandied about like so many baseball scores. Nevertheless, the message is plain and the reason for the vigorous opposition to Basic Income (BI) is clear. Some of the points inviting skepticism are well taken. Tracing the origins of BI back to Thomas More and Thomas Paine is in fact quite a stretch. The same familiar More passage is always quoted but have you ever seen a different one? We are dealing here with a posteriori myth making to establish legitimacy.

For this group of authors, the concept of BI is a part of neoliberal ideology. “The concept of BI is tied to the emergence of neoliberalism both in its response to the crisis [in post-war social protection] and in the conception of social justice it embodies.” Furthermore, in the words of economist Lionel Stoléru “the market economy can encompass the fight against absolute poverty” but “it is incapable of digesting stronger remedies against relative poverty.” The latter refers to income inequality rather than to deprivation.

Neoliberalism is opposed to the concept of social rights. A generous BI would be prohibitively expensive without cutbacks in “collective” spending such as welfare, education, public pensions, health, etc. Market forces would replace the idea and institutions of social justice. The “equality of chances” defended by neoliberalism would lead to a society that is more meritocratic but no less unjust, claim the authors.

It is no secret that wealth has increased dramatically since the 1970s but that the rich have benefited disproportionately. BI is seen by the authors as a Trojan horse in the heart of Social Society, whose purpose is to undo all of the social programs developed in the 20th century before the advent of neoliberalism. Proponents in the libertarian left argue that BI would be the “Capitalist road to Communism,” in the words of Philippe Van Parijs himself. BI is seen as a synthesis of liberal and socialist utopias. A description of the conflicting attitudes towards work will best illustrate the divergence in approaches. The classic leftist view is that a citizen’s work defines his contribution to society and tends to conflate work and employment. It is up to society to validate each member’s work effort. The authors claim that BI proponents refuse to accept the idea that work can be a factor for social integration, thus their view that full employment is not a useful goal. On the contrary “the social utility of an activity cannot be established as valid a priori; it must be submitted to democratic approval.”

What democratic approval would mean in practice is not explained but then the Swiss were asked to approve BI with few details provided and 23% voted in favour. Another argument in favour of BI is that it would enable natural caregivers in the home to provide for the young, the sick and the elderly. The authors of this book cannot agree that these activities are valid work in the Marxian sense. To believe otherwise, they say, is “to espouse neoclassical propositions omnipresent in economic pseudoscience.” Some feminists also oppose BI because they see it as a trap to keep women in traditional roles.

So, is BI just a neoliberal plot to destroy the social protections developed in the post-war years by the social state that are inextricably linked to the strength of labour? If not a conspiracy, BI is presented as the culmination of the free market utopia in our collective neoliberal imagination.

The four writers of this tract are nostalgic of more coherent times:

“Since Durkheim,the sociological tradition considers that in developed societies, the division of labour and the resulting specialization of functions produces a solidarity that assures social cohesion. The assignment of individuals to social positions does not only depend on their own will. Impersonal social forces, determinism, belie the claims that attribute to individual merit alone the possibilities of emancipation. The more autonomous the individual the more dependent he is on society. We cannot therefore be but ourselves, anchored in our individuality, to the extent that we are social beings.”

This is no longer the world we live in.  In a post-industrial sharing economy, we are still social beings but employment where labour is pitted against capital no longer defines us. The nostalgic socialist authors are justifiably suspicious of neoliberal aims to cut existing social programs but these have a long history and broad support. Making sure that BI beneficiaries do no receive less than before is a part of any serious discussion or test of Basic Income. Vigilance is always appropriate but not to the extent of, as we say in French, tripping on the flowers woven into the carpet.

Book reviewer biography: Pierre Madden is a zealous dilettante based in Montreal. He has been a linguist, a chemist, a purchasing coordinator, a production planner and a lawyer. His interest in Basic Income, he says, is personal. He sure could use it now!