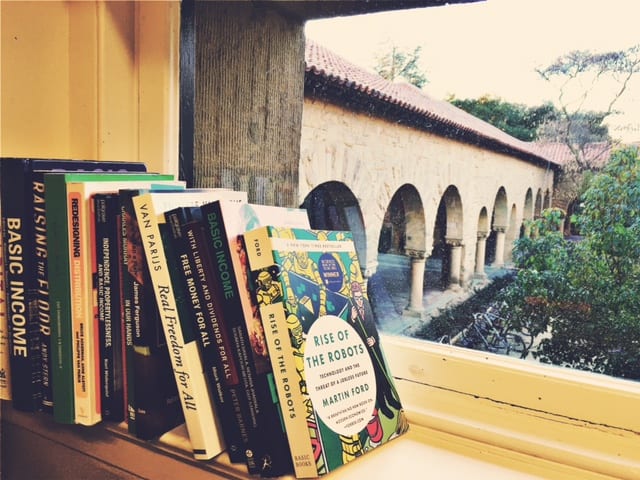 Juliana Bidadanure, Assistant Professor of Philosophy at Stanford University, has designed a graduate seminar on the philosophy of basic income, which she is currently teaching for the winter term.

According to the official course description, the seminar will address questions such as the following: “[I]s giving people cash no strings attached desirable and just? Would basic income promote a more gender equal society through the remuneration of care-work, or would it risk further entrenching the position of women as caregivers? Would alternative policies be more successful (such as job guarantees, stakeholder grants, or a negative income tax)? How can we test out basic income? What makes for a reliable and ethical basic income pilot?” 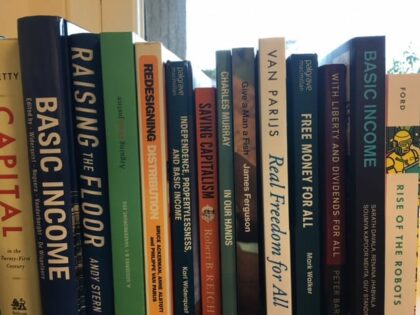 The seminar will analyze and critique basic income from multiple perspectives in political theory, including feminism, liberalism, republicanism, communism, and libertarianism. Initial readings include classic works by Philippe van Parijs and responses from his critics. Subsequent sessions will address contemporary philosophical work on basic income, as well as potential alternatives, such as job guarantees. Additional topics include empirical work on the health (and other) effects of basic income, the role of automation in motivating basic income, and basic income in relation to gender and racial justice, among others.

Explaining why she was inspired to develop the course, Bidadanure says, “It has been my dream for a while to teach a class on the Philosophy of Basic Income. First, because I am committed to the idea that everyone has a right to an income and because I think that UBI deserves serious treatment; second, because I think it is a great lens through which one can teach Political Philosophy. There is great writing for and against basic income from within pretty much each and every school of political thought. And so my idea was to introduce students of a variety of disciplines to a broad range of writers in political philosophy by focusing on UBI. Given the recent interest in Basic Income in the US, including by computer scientists, engineers and economists, I thought that the timing was right to launch the class!”

On February 8, a special panel on basic income experiments will be held in connection with the seminar.

The panel will feature guests Guy Standing (Professorial Research Associate at SOAS, University of London; BIEN co-founder), Elizabeth Rhodes (Research Director of Y Combinator’s basic income experiment), and Joe Huston (Regional Director at GiveDirectly). Standing, Rhodes, and Huston will speak about basic income research in (respectively) India, Oakland, and Kenya. The event will be presented as a roundtable discussion and open to the public. More information on this event is available here.

Although housed in the Department of Philosophy, the seminar spans topics of interest to students in many disciplines. The seminar group is constituted by 10 enrolled participants as well as a further 10 auditors, comprising students of philosophy, political science, psychology, economics, computer science, engineering, and business.

Asked about his interest in the seminar, one participant, a PhD student in Economics, remarks, “Basic income is such a hot topic, but I’ve not come across much rigorous academic thinking on the topic, in any discipline. I now discover there is a whole bunch in philosophy, which I was unaware of and which is really exciting!”

Commenting on his reactions after the first session, he adds, “It’s awesome that the class is about a third economists, a third philosophers, and a third computer scientists – it seems like the venue for a truly exciting exchange of views; and the arguments for and against basic income are so much richer and more diverse than this economist expected!”

Another student in the seminar, Sage, is currently working towards a masters in Symbolic Systems while also finishing an undergraduate degree in Computer Science. Her interest in the topic derives from her work in the technology sector:

“My masters thesis is a work of political philosophy analyzing the responsibility of tech companies to help those in poverty. I am interested in Universal Basic Income because it has grown increasingly popular in the US due to the fear that one day all of our jobs will be completed by robots. I am interested in exploring the other reasons for Universal Basic Income and determining if it is a viable choice in the U.S. given our trajectory in the tech sector. I was impressed by how diverse our class was by region, interest, and background. Having the opportunity to discuss topics in basic income with students so different from me is a fantastic opportunity to round out my research.”

Anusha, a graduate student in Computer Science says her love for data structures (especially the top view of binary tree) made her focus on natural language processing and computer vision. She became interested in the seminar due to her background in AI:

“I was really interested in this seminar because Universal Basic Income has been receiving a lot of attention lately, especially in the Computer Science and AI communities, due to the potential impacts of automation on the future of work. There have also been a lot of discussions around the joint responsibilities of Silicon Valley and policymakers to help those whose jobs are most at risk. I’m really excited about this seminar because it addresses Universal Basic Income from several different perspectives, and I’m eager to learn about the various arguments for and against UBI from those standpoints.”

Nishith, an undergraduate senior in Computer Science who works on computer vision and reinforcement learning, became interested in UBI following a discussion of the economic impact of self-driving trucks and President-Elect Donald Trump’s emphasis on bringing manufacturing jobs back to America. He is excited by Bidadanure’s seminar, adding, “I was surprised to learn that discussions about UBI need not revolve around automation (as they do in Europe) and had a great time talking about the potential benefits and pitfalls of this proposed policy [at the first class meeting].”

Dr. Bidadanure, who holds a PhD in Political Philosophy from the University of York, has research interests at the intersection of philosophy and public policy.

Bidadanure plans to teach an undergraduate course on basic income at Stanford in the next academic year. She is also working to launch a basic income research initiative at Stanford as part of the Center for Ethics in Society in 2017.