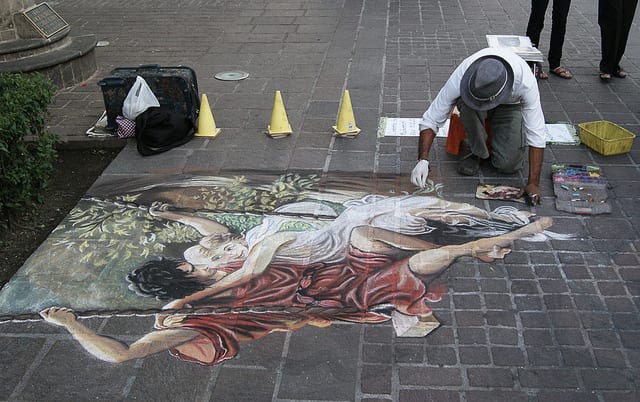 The U.S. Department of Arts and Culture, a non-governmental organization that promotes “programs and policies that cultivate creativity, empathy, and collaboration”, released a new platform on November 19, 2016 — aimed at protecting Americans’ right to culture under a Trump presidency.

The platform consists of 10 policy demands — from a public service jobs program to criminal justice reform to investment in arts education — including a basic income grant.

[R]ising costs, falling spending-power, the uncertainty of the economy, macroeconomic policies that have placed corporate success above individual well-being. For artists and cultural organizers as for others, the current system mandates overproduction, often exacerbated by under-compensation. For example, existing subsid[ies] for artists operates almost exclusively on a project basis, forcing artists who apply for support to constantly seek novelty and conform to arbitrary deadlines rather than allowing work to evolve and emerge according to a more organic timetable. Competition for scarce resources is incredibly intense and hugely discouraging for those who don’t fall under currently favored criteria …

In virtually every field, decision-makers fail to prioritize necessary time for reflection, restoration, and conviviality. It’s a challenge to discern, integrate, and act on cultural development needs when competition for survival eats what could otherwise be time for creativity, connection, and pleasure. We long for a future in which overproduction and overconsumption will no longer distort our society, with a universal cultural benefit: the ability to live in balance with each other and the life of this planet.

In its abridged platform, USDAC emphasizes that similar challenges confront workers in many occupations and that the organization is not making a “special pleading for artists”.

USDAC proposes a basic income grant large enough to cover basic needs such as food, housing, and medical care, distributed in the same amount to all regardless of other income.

To fund the BIG and other reforms, the organization proposes taxes on advertising and financial transactions, as well as the sell of “social impact bonds” to private investors.