Timotheus Höttges, CEO of the multibillion dollar telecommunications company Deutsche Telekom AG, has previously expressed support of unconditional basic income. In December 2016, he again addressed the subject in an interview in the German business newspaper Handelsblatt.

In a recent interview with Handelsblatt, Telekom CEO Timotheus Höttges talks about the changing nature of work, especially potential job loss due to digitization — to which, he admits, his own company is not immune — and the demand for more specialized skills. In response to a question about why he supports an unconditional basic income (“bedingungsloses Grundeinkommen”), he notes that jobs are becoming more project-based, with permanent full-time employment becoming less of a norm. 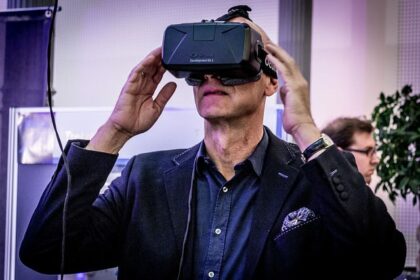 Between digitization and project-based work structures, we should expect that workers will need more time to retrain as well as more periods of unemployment or part-time employment — and, according to Höttges, Germany’s current welfare system is ill-equipped to support such workers. Thus, he believes that the government should replace its complex system of subsidies with an unconditional basic income [1].

Höttges adds that an unconditional basic income would promote more dignity (“Würde”) than Germany’s current welfare system — which puts the would-be recipient in the position of a supplicant, having to ask for aid — and that it could promote entrepreneurship.

Although he admits that some might take advantage of the basic income without contributing to society, Höttges denies that a basic income would create a “society of loafers” (“Gesellschaft von Faulenzern”), since it is through work that people find meaning and identity.

Höttges also points out that a basic income would encourage respect for those who choose to do work that is traditionally unpaid, giving the example of care for ailing parents. (It’s worth noting in this connection that, earlier in the interview, Höttges argues that revenue is no longer an adequate measure of productivity, given the extent to which information can now be created and distributed freely, as in Wikipedia.)

When asked about funding for an unconditional basic income, Höttges stresses that the policy needs to be seen as part of a broader package of a reforms, including tax reform. He maintains that corporate profits must be taxed and redistributed as a matter of justice, fairness, and solidarity (“Gerechtigkeit, Fairness, Solidarität”).

The interview also mentions top-ranked German CEOs who are sympathetic to basic income, including Götz Werner of dm-drogerie markt — with whom Höttges has discussed the idea — and Siemens CEO Joe Kaeser, who called for “a kind of basic income” during the Süddeutsche Zeitung Economic Summit in November (although he subsequently indicated in a Tweet that he did not believe the basic income needed to be unconditional).

If you read German, you can read the entire interview here: