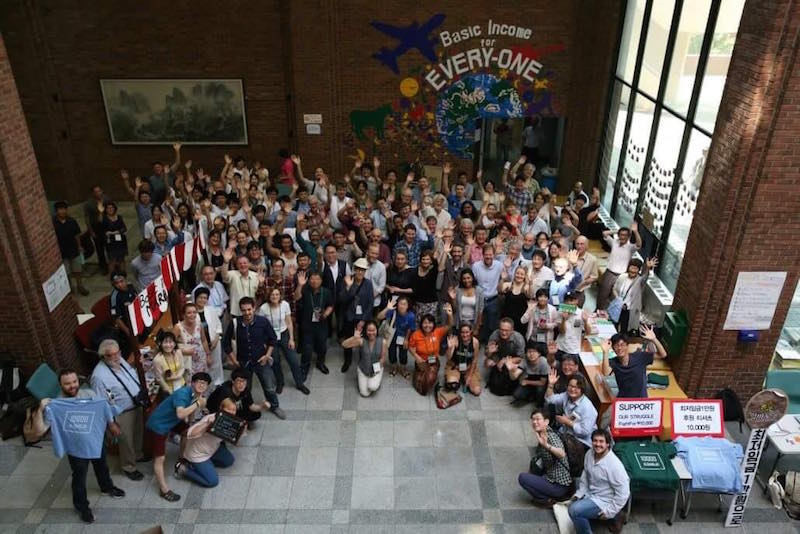 I first heard about BIEN at a conference in Switzerland about the future of work and basic income. I went to that conference because of a hunch. I had finished reading Karl Polanyi’s The Great Transformation and was in the midst of a brainstorm, thinking about how to change the system we find ourselves in. It came to me that if in the past humans commodified fictitious commodities (Land, Labor and Money), then we can also decommodify at least one of them. The question was how. When the basic income idea came to my head, I thought I had discovered the wheel.

I couldn’t sleep. I felt like I needed to tell somebody. My wife didn’t quite get my crazy mumbling at 2 A.M. and told me to go to sleep. I quickly found that others had already thought of this long before me and had developed the idea further. I couldn’t be happier. I checked social media the next day and found out about the Swiss referendum and the event that was happening before it, gathering academics, entrepreneurs and others interested in basic income. Not looking back, I bought the cheapest ticket I could find and went.

At the conference I had the opportunity of meeting Guy Standing and many other inspiring people involved in the network. I knew I had made the right choice in going. I met young scholars there, who told me about the congress happening in Korea in July 2016. Originally from Guatemala, I had been living in Taiwan for 5 years. Living so close to Korea, I thought I should go as well. Applications were long past the deadline but I still sent an email asking if I could present a paper. When I got accepted I went without glimpse of doubt, this time accompanied by my wife. She and I met in Taiwan while having a full scholarship so we can empirically attest to the transformative benefits of a basic income.

My paper was about alternative ways of funding a basic income. Specifically, I thought of creating financial funds that could make a basic income scheme sustainable in the long run. In this way, I theorized, it could be possible not only to provide a basic income to people but at the same time start changing the greedy ways that finance is used in our time. I received a lot of constructive feedback from the people who attended the talk and learned a lot from the experience.

At the BIEN congress I met Anja and other life members of the BIEN network. Inspired by their clarity of vision and positive attitude I decided to join on the spot. I am proud member number 252. Right now I find myself in the process of setting up a network in Guatemala, looking for funding in order to do a pilot project. So far we have contacted one of the municipal mayors of Guatemala. He and his team were very interested in the idea and have agreed to cooperate with us.

Although I just joined the network, I hope to help as much as I can in spreading the word about the importance of basic income and getting other people involved in my own country. I believe basic income can help in reducing poverty and increasing the livelihood of people in Guatemala and the rest of the world. The movement is only beginning!