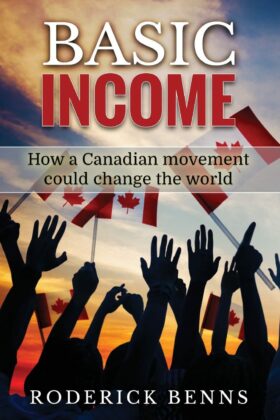 Canadian journalist Roderick Benns, publisher of the progressive news site Leaders and Legacies, has devoted much of the past two years to interviewing experts on basic income–with a focus on the possibility of a basic income in Canada.

On the basis of the material accumulated in this time, Benns has now produced a 290-page book on basic income, Basic Income: How a Canadian Movement Could Change the World, which is now available for purchase through Amazon.

Featuring scores of interviews and articles with prominent Canadians, including federal Green Party leader Elizabeth May, Senator Art Eggleton, and retired Senators Hugh Segal and Michael Meighen, there are also interviews with MPs Scott Brison and Dan Blaikie, as well as big city mayors like Calgary’s Naheed Nenshi and Edmonton’s Don Iveson. Benns also interviewed researchers, academics, educators, and medical doctors, along with average Canadians — to get them to imagine what their lives would be like under a basic income guarantee.

In addition to writing for Leaders and Legacies, Benns assists with the communication efforts of BIEN’s Canadian affiliate, the Basic Income Canada Network.

2 comments Canada
The views expressed in this Op-Ed piece are solely those of the author and do not necessarily represent the view of Basic Income News or BIEN. BIEN and Basic Income News do not endorse any particular policy, but Basic Income News welcomes discussion from all points of view in its Op-Ed section.