US: President Obama calls UBI “a debate we’ll be having” in coming decades 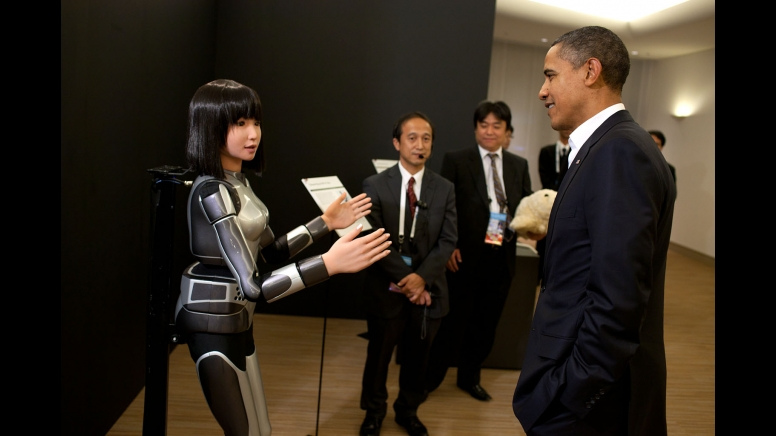 The interview covers a plethora of issues surrounding the political, economic, and ethical implications of artificial intelligence. After discussing regulation, funding, and cyber security, among other topics, it is Obama who turns attention to the economic implications of AI and, in particular, the specter of technological unemployment:

One thing that we haven’t talked about too much, and I just want to go back to, is we really have to think through the economic implications. Because most people aren’t spending a lot of time right now worrying about singularity—they are worrying about “Well, is my job going to be replaced by a machine?”

He then expresses optimism regarding the possibility for continued job creation in the face of technological progress (“historically we’ve absorbed new technologies, and people find that new jobs are created, they migrate, and our standards of living generally go up”); however, he proceeds to warn that the government must do what it can to ensure that the gain do not simply go to a “small group at the top”:

Low-wage, low-skill individuals become more and more redundant, and their jobs may not be replaced, but wages are suppressed. And if we are going to successfully manage this transition, we are going to have to have a societal conversation about how we manage this. How are we training and ensuring the economy is inclusive if, in fact, we are producing more than ever, but more and more of it is going to a small group at the top? How do we make sure that folks have a living income? And what does this mean in terms of us supporting things like the arts or culture or making sure our veterans are getting cared for? The social compact has to accommodate these new technologies, and our economic models have to accommodate them.

Following up on Obama’s remarks, Ito broaches the topic of UBI:

… I don’t know what you think about universal basic income, but as we start to see people getting displaced there’s also this idea that we can look at other models—like academia or the arts, where people have a purpose that isn’t tied directly to money. I think one of the problems is that there’s this general notion of, how can you be smart if you don’t have any money? In academia, I see a lot of smart people without money.

In reply, Obama acknowledges that the debate over UBI would continue over the coming decades and, moreover, highlights another influential argument often given in its favor–recognition of the value of unpaid (and underpaid) labor:

[W]hether a universal income is the right model—is it gonna be accepted by a broad base of people?—that’s a debate that we’ll be having over the next 10 or 20 years. You’re also right that the jobs that are going be displaced by AI are not just low-skill service jobs; they might be high-skill jobs but ones that are repeatable and that computers can do. What is indisputable, though, is that as AI gets further incorporated, and the society potentially gets wealthier, the link between production and distribution, how much you work and how much you make, gets further and further attenuated—the computers are doing a lot of the work. As a consequence, we have to make some tougher decisions. We underpay teachers, despite the fact that it’s a really hard job and a really hard thing for a computer to do well. So for us to reexamine what we value, what we are collectively willing to pay for—whether it’s teachers, nurses, caregivers, moms or dads who stay at home, artists, all the things that are incredibly valuable to us right now but don’t rank high on the pay totem pole—that’s a conversation we need to begin to have.

Last June, President Obama was asked about universal basic income in a Bloomberg Businessweek interview. Specifically, the interviewers asked about Obama’s view on UBI as a possible solution to economic disruption caused by globalization, and Obama replied by explaining that automation would likely produce even greater disruption (perhaps deliberately courting UBI supporters), while not taking a firm stance on–or even explicitly mentioning–UBI.

Obama’s recent remarks, then, may represent his most direct–and most sympathetic–comments on UBI to date.

On November 8, Americans will vote on the next President, to be inaugurated on January 20. Frontrunner Secretary of State Hillary Clinton has spoken about basic income rarely, and has not expressed support. In an interview with LinkedIn’s Daniel Roth (“From bots to Brexit: Hillary Clinton explains how she’ll manage this uneasy economy”), published on June 28, she directly rejected the policy –saying that she’s “not ready to go there” and instead focusing on job creation and expansion of the earned income tax credit.