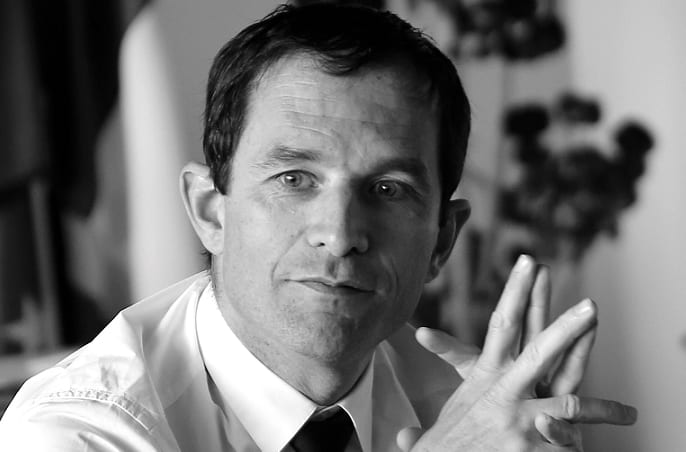 Though all of the Green candidates have showed support for basic income, Hamon is the only PS candidate to express vigorous support for the idea.

In an article in Les Echos, Hamon lays out some of his main reasons for advocating for a UBI:

“We can not accept that thousands of French are forced to sacrifice their physical and mental health for grueling and precarious jobs. A transition is necessary and the ambition is great. Tomorrow, our citizens could be released from sustained uncertainty and, instead, choose their mobility. Tomorrow, all working forms of economic and social utility are recognized and valued, beyond the single employee or paid work. The value of an individual and his right to dignity would not be indexed to their contribution to GDP.”

Relatedly, Hamon campaigns for the recognition of “burnout” as an occupational disease. “The Law on social dialogue and employment” first recognized burnout in this way last year, and Hamon would like to make further advancements.

In his arguments for a UBI, Hamon also stresses the risk of unemployment due to increased mechanization of work. As he points out on his website,

“In Europe, between 2000 and 2010, 7.6 million jobs have disappeared under the direct impact of new technologies.”

“While 10% of the workforce is unemployed, up to 3 million jobs could disappear in France with digitization by 2025.”

Moreover, today in France, 24% of individuals between the ages of 15 and 24 are unemployed. “The youth… should no longer be synonymous with insecurity,” writes Hamon.

Hamon proposes an unconditional basic income distributed to every adult citizen on an individual basis. He says, “its amount and funding would be adjusted regularly to ensure each and every citizen has sufficient income to live and participate in public life.” 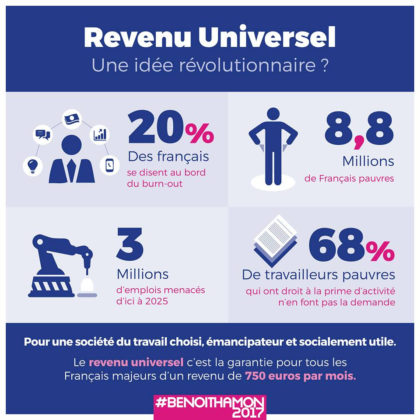 Here are the main features of the UBI program that Hamon proposes.

Every adult citizen would receive €750 per month. This would cost €300 billion per year. The UBI would exist alongside €18 billion in housing subsidies, €23 billion in social benefits, and €53 billion in family benefits–his rationale being that “the Basic Income should strengthen, not reduce the social protection of the French.”

Hamon plans to finance the basic income in part through reforms to the tax system, expecting to bring in €24 billion in revenue by individualizing income tax, €84 billion by closing tax loopholes, and €80 billion by fighting against tax evasion. He also recommends taxing wealth and digital technology, in addition to other appropriate taxation (he provides the example of French tax authorities who are currently demanding €1.6 billion in back taxes from Google).

Hamon wants to change conceptions of wealth, the value of individuals, and the value of work from economic (GDP) to social, cultural, and educational. He explains his vision in the above video.

September polls show Hamon with support from 14% and 16% of those who intend to vote in the election. The PS presidential primary will take place on January 22, 2017.

On October 18th, Hamon invited people to a well-attended Q&A over coffee and drinks. Hamon’s campaign is part of a growing surge of interest in UBI in France. France’s prime minister, for instance, recently reopened the gates for discussion on basic income.