An Unconditional Basic Income for 60 Plus 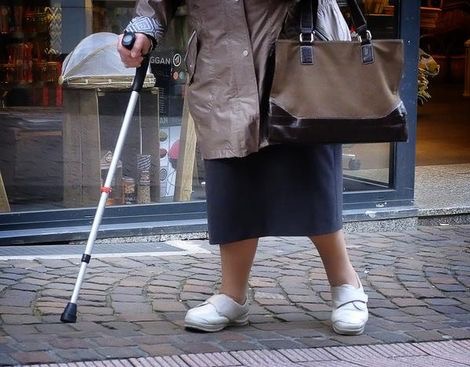 Last August 21, the Dutch woke to find an interesting article in their morning paper, written by Mrs. Annemarie van Gaal. In her weekly Monday column she suggested abolishing the AOW and all other income schemes for individuals above 60 years of age, with their unworkable obligations, bureaucratic regulations, and fees and punishments. Instead, AOW recipients would receive an unconditional basic income of €1100 to €1200 a month. This would greatly decrease the seriousness in which they need to take these 9 considerations to make before you retire into account, decreasing worries and stress for the elderly.

For many people, the article came as a surprise, because it was published in the daily journal, De Telegraaf (The Telegraph), which is legendary for its right-wing liberal and right-wing populist bias. And a recent poll among right-wing voters revealed that the majority do not approve of the idea of a basic income. 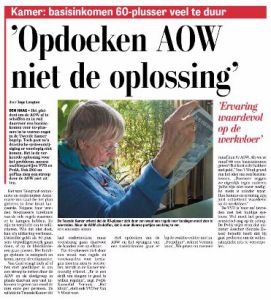 The Dutch abbreviation ‘AOW’ means ‘Algemene Ouderdomswet’ — the 1956 law installed a state pension for the elderly, above the age of 65. From 2016 onwards, the retirement age is expected to increase quickly: to the age of 66 in 2018, and to 67 in 2021. And as of 2022, entering the AOW scheme will be linked to the average life expectancy.

This plan for the increase of the pension age was agreed upon by the current coalition of VVD (People’s Party for Freedom and Democracy) and PvdA (Labour Party) in order to cut government spending. These austerity measures are expected to save the Treasury €3.6 billion by 2024. De Telegraaf was a vocal supporter of the increase in the retirement age.

Mrs. van Galen is a well-known TV personality and businesswoman. In her television program, she teaches benefit claimants how to get a job. She demonstrates how much money the candidate will earn from accepting certain kinds of work, sends him to intensive job application training, and gives him a full makeover: a new haircut, new clothes, and if necessary, new teeth. Dress for success!

Her suggested basic income plan is very appealing because it would affect two major social problems in Dutch society.

The first problem concerns the growing group of people over 60 who have lost their jobs, often in the crisis of 2008-2009, and during the austerity measures that followed.

As Mrs. van Gaal puts it:

The unemployed above 60 are not to be envied. Unemployment among this group has never been so high. Their whole life they worked hard. Now they have lost their work and as a consequence have to deal with sharply declining living standards, whereas their chances to find a new full-time job is nearly zero, so the years to come will be full of uncertainty before they get the state pension (AOW), and what at that time will be left of their saved pensions?

Despite their dire prospects, the UWV (Employee Insurance Schemes Implementing Body) requires that the unemployed over 60 continues to apply for jobs, whether they can or not. The meager allowances of those who don’t (or can’t) are cut down or withdrawn. In other countries such as America, it can become a lot worse, elderly citizens with no allowances or health care end up forgotten about, without insurance these elderly are very prone to medical emergencies, requiring the aging population to think about insurance early on in their lives. When it comes to dental insurance for seniors, PPOs are the most common insurance plan. They offer a network of preselected dentists that they can choose from. Only if they were to visit one of those dentists will they save money. Otherwise, the elderly population has minimal options when it comes to oral healthcare. Is this how it is looking for the Dutch?

But for businesses to take on an older applicant, the ten different allowances and arrangements assigned to them creates a process so complicated that it’s frequently necessary to hire a third party simply to manage the process. Creating this kind of bureaucracy in the workplace does no one any good, and is certainly no way to encourage employment.

In recent years, the Dutch government has pumped hundreds of millions of euros into job training, networking events, and other arrangements for the older and unemployed. And the effectiveness of these measures is yet unknown, says the Court of Audit, and is hardly expected to dramatically increase employment prospects anytime soon.

The second issue with AOW, is that it’s almost an unconditional income — the state pension is dependant on your living situation. If you are going to live with another person, whether it is a partner, a family member who provides care, or a lodger, you are financially punished, whereas if you choose assisted living you may receive more. And if you have little or no saved pension, pension benefits as supplements are means-tested, so to earn some extra money is nearly impossible. The healthy and elderly will not move in with their children, for example, to babysit the grandchildren, because their income will only be reduced. Strange, indeed, because it would save the government a great amount spent on medical expenses and childcare allowances.

Ultimately, a basic income is the best route for the future, so let’s introduce it on a limited scale, namely into the group aged 60 years and above, regardless of [if] they work or not, irrespective of their living conditions. [And] if you live with another 60 plus [you would] have twice that amount. Look after your grandchildren, start volunteering, help your neighbors, go traveling or take up a small job for a few hours per week. I’m sure we will [have] a much better society. All seniors will take part in society without restrictions and rules, without being cut and without compromising. How nice. 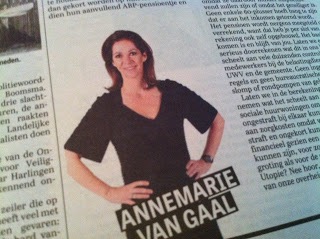 The reaction to Mrs. van Gaal’s column was overwhelming. Within a few hours she was invited onto several talk shows, and many websites took notice of the column and hundreds of comments appeared online. One site recommended appointing her as the first female Prime Minister of The Netherlands.

However, in stark contrast, some politicians reacted bleakly to the proposal. After all, they had worked hard (and were well paid) to develop and defend the new retirement pension scheme and all other relevant legislation. Coalition partners, VVD and PvdA, consider the plan too radical, too expensive and ‘the wrong solution’ to this particular problem. The VVD even said it ‘abhors’ the idea of a basic income. One of their MP’s pointed out that society should not exclude the elderly, and that according to him, that’s what a basic income does. “Then we say to the elderly: you are no longer needed and that is not true. Their knowledge and experience are highly valued in the workplace.”

Norbert Klein, the leader of the Vrijzinnige Partij (Cultural Liberal Party), a party with one seat [in the Tweede Kamer], is pleased with the ideas of Van Gaal — but the plans do not go far enough for him. He has written a memorandum that calls for an unconditional basic income for every Dutch citizen from the age of 18 onwards. On September 19th this memorandum will be discussed with members for the Committee for Social Affairs and Employment of the Second Chamber of Parliament and the Minister for Social Affairs and Employment, Lodewijk Asscher of the PvdA.

Several organizations as well are not very sympathetic to the idea of an unconditional basic income for the 60 plus. “Mrs. van Gaal acts as an elephant in a China shop,” said a spokeswoman for the Unie-KBO, the union for the elderly, “but we are pleased with all the attention [these urgent matters are receiving].” Nibud, the National Institute for Family Finance Information, considers €1100 or €1200 too low to cover all household costs.

But a huge amount of readers reacted positively and enthusiastically. “An idea which is very close to my heart”, commented someone. “Abolish the bureaucracy for 60 plus,” another responded, “finally, someone who really understands the problems of older unemployed”. Readers, too, hinted at a political career for the Telegraaf columnist. “This is a plan which a sane man cannot ignore. Better and more pleasant than the plans that are figured out by the pundits in The Hague. The government may try to increase job opportunity for this group, but now it is clear that this policy fails.”

Dutch people want a simpler society. No more complicated rules, no hassle with endless discounts or correct taxes. We want it to be simpler, easier to understand and implement for everyone. The introduction of an unconditional basic income is inevitable over time. Utopia? No, it just requires some guts of our government.