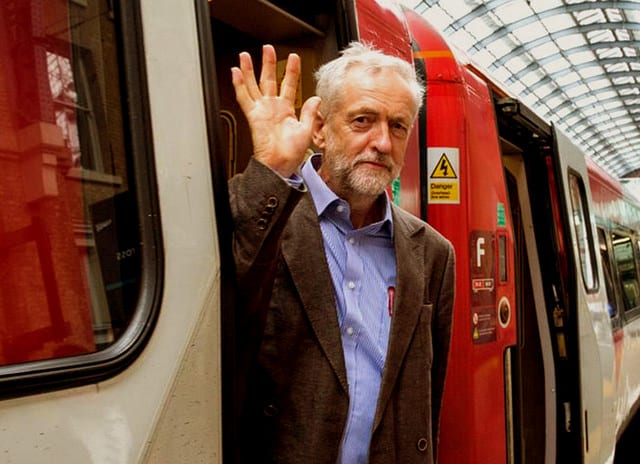 Labour Party leader Jeremy Corbyn stated in a recent HuffPost interview that he is “instinctively looking at” a basic income, along with Labour’s Shadow Chancellor John McDonnell.

Jeremy Corbyn, the Leader of Britain’s Labour Party, was recently asked about universal basic income (among other topics) in an interview with HuffPostUK. Corbyn replied that he and Shadow Chancellor John McDonnell are “instinctively looking at” the policy.

Here is the remainder of his answer:

I am looking forward to discussing it with our colleagues from Norway because we have to think radically about how we bring about a more just and more equal society in Britain, how we develop policies that achieve that.

Because what we are doing is heading in absolutely the wrong direction with a growing wealth inequality and an opportunity inequality for communities, as well as poorer families. It’s got to change and it will.

I can see the headline attraction to it. I don’t want to commit to it until I’ve had a chance to look at it very seriously and very carefully because this would be a major, major change in social policy and it’s something I would invite the whole party and the whole movement to have a serious discussion about.

What I want to do is develop policymaking through to 2020, where it’s very obvious what the general direction is we are going, on environmental policy, on housing policy, and health policy.

Corbyn was soon shown right about the “headline attraction” of basic income. Immediately following the interview, HuffPostUK editor Paul Waugh published an accompanying article with the headline “Jeremy Corbyn Looking At ‘Universal Basic Income'” And, on the next day, an article appeared in The Independent with the title “Universal Basic Income: Jeremy Corbyn considering backing radical reforms”.

John McDonnell has been a supporter of basic income prior to his appointment as Shadow Chancellor in September 2015. Earlier in this year, he encouraged the Labour Party to consider adopting UBI as official party policy on several occasions, most notably at events in February and June. To date, however, the Labour Party has not made basic income part of its platform.

Following Brexit, the Labour Party reached over 500,000 members, its highest number in decades.

Full interview with Jeremy Corbyn, which also touches upon housing policy and other issues:

Background about the British Labour Party’s recent interest in UBI:

In his HuffPostUK articles, Paul Waugh states, “The universal basic income idea has been around since the 1970s but has recently become popular and Canada’s Ontario and Norway are both starting pilot schemes.” Two brief remarks:

1. Out of Scandinavian nations, Finland is much more advanced than Norway in planning a basic income experiment, with one set to begin in 2017. While Norway has held conferences to discuss the idea of a basic income, it has not announced any plans for a pilot study.

Thanks, as always, to my supporters on Patreon