SUMMARY: Guy Standing, “The Corruption of Capitalism: Why rentiers thrive and work does not pay” 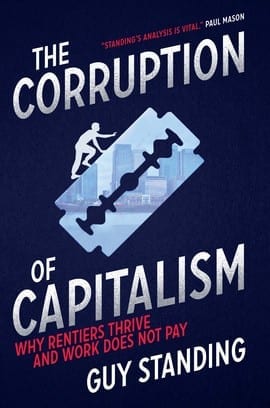 Guy Standing has published a new book that became available on July 14, 2016, published by BiteBack.

The book notes that the implications of the Age of Rentier Capitalism go beyond the economic sphere as the plutocracy fund and influence political parties, while media ownership is concentrated in the hands of a few powerful individuals.The Corruption of Capitalism shows why, in the interests of democracy and our common wealth, the rise of rentier capitalism must be resisted. If it is not, we risk dire social and political consequences.

A summary from the publisher states: ”

There is a lie at the heart of global capitalism. Politicians, financiers and global bureaucrats claim to believe in free competitive markets, but have constructed the most unfree market system ever. It is corrupt because income is channelled to the owners of property – financial, physical and intellectual – at the expense of society.

This book reveals how global capitalism is rigged in favour of rentiers to the detriment of all of us, especially the precariat. A plutocracy and elite enriches itself, not through production of goods and services, but through ownership of assets, including intellectual property, aided by subsidies, tax breaks, debt mechanisms, revolving doors between politics and business, and the privatisation of public services. Rentier capitalism is entrenched by the corruption of democracy, manipulated by the plutocracy and an elite-dominated media.

Meanwhile, wages stagnate as labour markets are transformed by outsourcing, automation and the on-demand economy, generating more rental income while expanding the precariat.

The Corruption of Capitalism argues that rentier capitalism is fostering revolt, and concludes by outlining a new income distribution system that would achieve the extinction of the rentier while promoting sustainable growth.”

To view and pre-order the book online, visit:  https://www.bitebackpublishing.com/books/the-corruption-of-capitalism