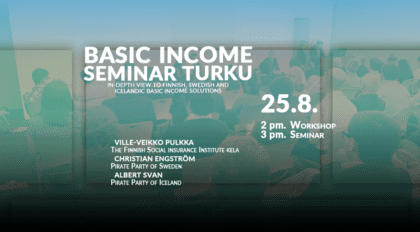 Pirates of Southwestern Finland is hosting a workshop and seminar on Basic Income in Nordic countries, with the support of Basic Income Earth Network (BIEN) Finland, Pirate Party of Finland and Pirate Youth of Finland.

At the workshop, BIEN Finland will facilitate four group discussions on the theme of ‘UBI for (enhancing of ) Nordic cooperation’, .

Confirmed speakers at the seminar are:

We hope that our seminar will broaden the basic income discussion by showing what’s happening at the moment in Nordic countries.

Iceland, Sweden and Finland are all having a serious thought about fixing social security, at least in part, by basic income. Leading countries will be first to see what to do and what not, so sharing that information without borders will bring the threshold lower in other states to consider basic income – which in turn, will accelerate the discussion further.

The detail can be found at:

Follow
Leave a comment Experiment, Finland, Pirate party
The views expressed in this Op-Ed piece are solely those of the author and do not necessarily represent the view of Basic Income News or BIEN. BIEN and Basic Income News do not endorse any particular policy, but Basic Income News welcomes discussion from all points of view in its Op-Ed section.