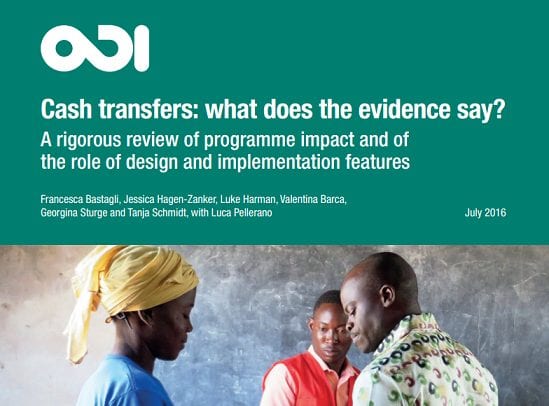 The Overseas Development Institute just released the largest meta-analysis of cash transfer programs ever, spanning 15 years of data and 165 studies. The main takeaway is that studies show a consistent reduction in poverty measures. Perhaps an even more important conclusion is that most evidence showed an increase in work participation after receiving the basic income.

Though these cash transfers differ somewhat from a pure basic income, the study provided the strongest evidence yet that a basic income-type approach is a crucial tool to eliminate poverty.

“There is strong evidence that cash transfers are associated with reductions in monetary poverty,” The report noted. “The evidence consistently showed an increase in total expenditure and food expenditure and a reduction in poverty measures.”

The few studies that did not find a statistically significant impact were possibly due to low transfer levels or because the transfer was only for limited time-frame, the report said.

Those studies that found decreased work were due to the elderly and individuals with dependents lowering their work participation. Several studies also found lower rates of child labor. As basic income advocates have said, this is likely a socially desirable effect.

Several other positive effects were found among the studies:

The study has some caveats regarding the overall positive results. But the review said concerns regarding unintended negative effects are not supported by the evidence.

“The vast majority of studies reporting statistically significant results showed that cash transfers contribute to delivering the outcomes that policy-makers intend to achieve. This finding is particularly impressive given its consistency across the critical outcome areas and high number of indicators covered by this review,” the report said.