CANADA: Basic income at the World Social Forum in Montréal 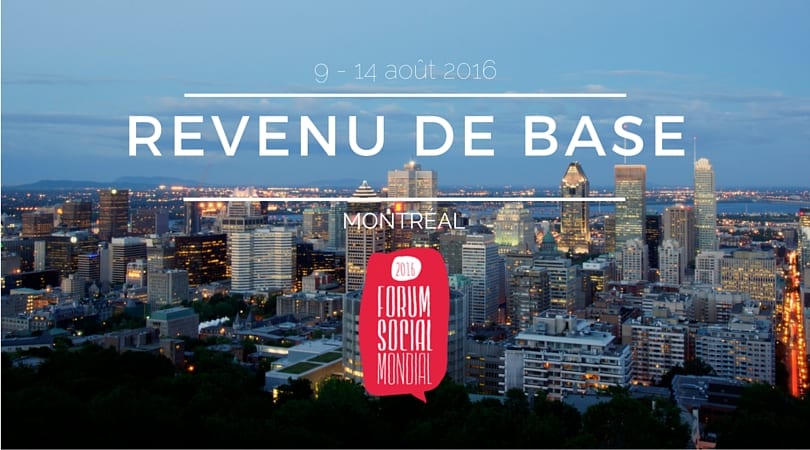 Revenu de base Québec (RBQ) and the Mouvement Français pour un Revenu de Base (MFRB) have teamed up to organize a series of initiatives spanning this years World Social Forum, to be held from August 9th – 14th in Montreal.

Various activities will be organized to help people learn, create and exchange views on a number of issues relating to basic income. Hoping to advance the idea during one of the largest global gatherings of civil society.

Discover the program (in French here):

In the style of a “hackathon” this creative marathon will be held over two and a half days and bringing together creators from different backgrounds: art, activism, technology, etc., who share an interest in basic income.

Ğeconomicus is an economic simulation game to discover the influence of money creation on trade. Players will buy and sell economic values in order to create new ones. There will be two sessions.

The goal of this convergence meeting is to bring together activists from all backgrounds to reflect on methods and actions to be taken at all different levels when it comes to turning the ideas of a realistic utopia into public policy. The scope extends from municipal politics to international politics, through experiments, and creating synergies between the various actors of civil society.

An assembly of healthcare workers, people active in helping the poor, activists of basic income and anyone interested in the link between income and health, in order to find common ground and ways to work together.

Debate: “The universal allowance and the maximum wealth”

Can a basic income be implemented without its corollary, maximum wealth? With the explosion of inequality and tax competition between states that threaten social achievements, market regulation through a “floor” and “ceiling” of income and individual capital seems like a promising idea in the direction of greater social and economic justice.

For the Grand Conference, we will welcome the participation of stakeholders from various backgrounds who will paint a picture of the situation of basic income around the world:

Associate professor at SFS-Qatar Georgetown University (Washington DC). He holds a PhD in Economics from the City University of New York and a doctorate in political theory from Oxford University. He participated in six books. Many relate to basic income, including his latest: Independence, Propertylessness, and Basic Income: A Theory of Freedom as the Power to Say No (Palgrave Macmillan, 2013). He is a founder and editor of the journal Basic Income Studies. His articles have also appeared in several magazines including: Political Studies; The Eastern Economic Journal; Politics and Society; and Politics, Philosophy and Economics. He is co-chair of Basic Income Earth Network (BIEN), the leading global network of research and action on the basis of income.

He describes himself as a “libertarian activist of basic income and direct democracy.” He is the president of ReCivitas, coordinating a basic income guarantee project in the city of Quatinga Velho, in the state of Sao Paulo, Brazil. He is the creator of the digital platform for direct democracy Governe-se.com and alternative IP site RobinRight.org. He has published articles and books and is regularly invited to give lectures on these subjects.

Historian and opinion shaper, he is the author of several books, he is best known as one of the editors of the permanent media platform online De Correspondent, created in 2013, when his book De geschiedenis van de vooruitgang was named by the Dutch to be the brightest non-fiction book of the year. In 2015, he co-wrote with Jesse Frederik the philosophical essay Waarom vuilnismannen meer dan verdien Bankiers. The English translation of his latest book, Utopia for Realists, gave him a far reaching international reputation.

Coordinator of Public Relations for MFRB and secretary of the European network UBIE, she will also participate in the Main Conference as the host and a speaker to present the progress of basic income in Europe.

Pre-registration to the activities on basis income come from all continents, it will be a truly global forum on the subject.